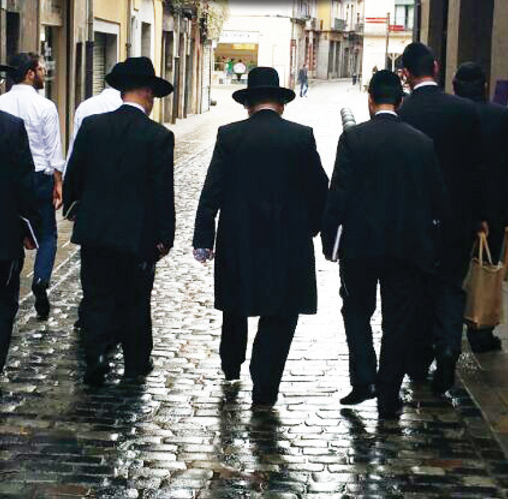 “Are you a talmid of Rav Moshe Shapira zt”l?” That is the question people started asking me after a picture of Rav Moshe and me, walking side by side, appeared in a magazine article concerning the petirah of that great gaon and tzaddik. My reply to all was the same: “I wish I was, but unfortunately I am not. I was only a bar bei rav dechad yoma, a student for a day.” If I share my personal story, it may provide a glimpse of Rav Moshe’s greatness for those who never had the opportunity to be in his presence. Here is my story of hashgocha protis and pure chesed of Hashem that brought me to walk side by side with Rav Moshe Shapira.

In 2011, the Bomberg Shas was being auctioned at Sotheby in Manhattan. A friend of mine called me out of the blue and asked, “Would you like to go see the Bomberg Shas?” I threw my obligations to the wind, and we headed down from Monsey to Manhattan. We arrived fifteen minutes before it was scheduled to close, and the line was around the block. After standing on line for several minutes, I reached out to the gentleman in front of me and said shalom aleichem. Little did I know that those two words were going to send me on a life altering trip. The kind gentleman shared a dvar Torah with me, to which I commented, “I think that the Maharal discusses it somewhere.” He immediately listed all the places where Maharal discusses the subject, and exactly what the Maharal says. I said, “Hold it. What is your name?” He replied, “Yehoshua Hartman.” I was talking to a living legend, a man who spent his life editing, elucidating, and publishing modern versions of the Maharal’s seforim. Our discussion began in earnest. As the line drew close to the entrance, I shared with him that I am more accustomed to learning Ramchal than Maharal, but I would like him to speak with my chavrusa, who learns Maharal diligently. On the spot, I dialed my chavrusa and they arranged to learn together periodically.

A few months later, Rav Yehoshua contacted me via our mutual chavrusa and insisted that I join him on a trip with Rav Moshe Shapira to study the seforim of the Ramchal in the Ramchal’s hometown, Padua, Italy. This was the third in a series of trips in which Rav Moshe’s students gathered from around the world to spend a few special days immersed in his shiurim. Now, I am not a jetsetter, and visiting Italy was not on my short list of things to do, but one cannot say no to Rav Yehoshua. Before I knew it, I was sitting before Rav Moshe in Padua with a Da’as Tevunos open in my hand. When Rav Moshe started the shiur by saying, “Ramchal began his work here, but was interrupted. We are here to continue that work,” I knew I was not on a trip, but a journey.

I first laid eyes upon Rav Moshe when I was a 19-year-old bochur learning in Mir Yerushalyim. One Thursday night, I attended Rav Moshe’s weekly Chumash shiur at Ohr Somayach. I beheld a king of the Torah, a man with surreal beauty, standing erect, speaking with royal poise. Every word was measured, all sources were quoted by heart, verbatim. I did not understand a word. But one thing I did know: I need to understand this. I persevered, and after attending the 90-minute shiur regularly, I began to understand and appreciate the enormous yet subtle revelations of his shiurim. Life moved on, the years passed quickly by, and I lost touch with Rav Moshe, but his image, always remai ned in my mind.

Fast forward 25 years to Padua. Rav Moshe’s beard was no longer brown, and age showed on his regal face, but he was a ma’ayan noveia mekor mayim chaim. Sitting before Rav Moshe and learning Torah ponim el ponim was an incredible experience. Imagine an orchard planted and groomed by a king. The orchard is closed to the public, but at its entrance, those who have merited to enter sell samplings of its exquisite fruit. Some offer a brilliant palette of tastes, while others attempt to sell their own humble pie. There is one man, a favored prince of the king, who surpasses all the rest. He does not offer samplings outside the orchard. Instead, he takes you inside. He guides you down its groomed paths, through its manicured gardens and flowing streams, and finally to the fruit trees themselves surrounding the wellspring that feeds them. He carefully selects from the fruit and teaches you how to appreciate the harmony of the orchard and the taste it produces. Learning with Rav Moshe was holding his hand and entering the pardeis of the Torah. Rav Moshe was not opportunistic in learning. He never said a standalone good vort that was disconnected from an understanding of the Torah as a whole. Everything he said was true to his deep understanding of the core principals of Torah. He did not attempt to dazzle you with a compilation of brilliant divrei Torah. Rather, he illuminated the core subject matter by illustrating where and how it fits into the tapestry of the Torah. Rav Moshe was a master craftsman, an artist of the highest caliber. When he sat down to deliver a shiur, he first surveyed the audience and then set the notch marking the depth of the shiur. From the first word on, the shiur was a journey into the orchard. But he would only take you until the depth notched at the outset, and from there on it was like a cryptic song that harmoniously delivers an unspoken message. Like a master musician, he stayed on key, never wavering. His purposeful pauses were moments of insight where his silence spoke more than his words. His deliberate hand movements emphasized the depth of his words.

Rav Moshe’s public persona was reserved and austere. He was the embodiment of kavod hatorah. Kavod, Rav Moshe frequently explained, is the balance of love and awe. When approaching him, you had to bear in mind the Mishnah in Avos (2:15) that says, “warm yourself by the fire of the chachomim, but be careful not to be singed by their burning coal.” As Rabeinu Yonah explains, if you keep yourself too far from a fire then you will be cold, but if you go to close you will be burned. So to with chachomim; if you stand from afar you will not learn, but if you draw too close and do not stand in awe then you will be harmed. On the trips, however, Rav Moshe conducted himself with a different style of behavior. He made himself accessible to all those who wanted to talk with him in learning. I dared to take advantage of that opportunity. As I walked with him side by side, I was aware of the chasm that lay between us. The great gaon, master of the Torah, heir to the greatest gedolim of the previous generations, was talking with an unlearned ba’al habayis from New York. As I bent over to ask a question, I was terrified to suspend myself over that bottomless chasm. I was relieved when he put his hand on my shoulder and graciously answered. Rav Moshe did not suffer fools lightly, and I got my fair share of rebuke. Oh, how precious that rebuke was. When I had the zechus to meet with him privately, he was a kind zeidy, and a wise and guiding father. He would inquire, “How do you spend your day?” and, “Which seforim do you learn?” Then he would offer encouraging, insightful, and compelling advice.

Rav Moshe seemed to be a mystery. He was sometimes reserved, sometimes engaging. Sometimes he responded with harsh rebuke, sometimes he was forgiving. His behavior was based on chochmah and middos. With chochmah, he evaluated each situation and then meted out the appropriate response. To the untrained eye, it seemed random or self-contradictory, but oh no, it was not. It was carefully decided and entirely befitting. His tzuras adam was a carefully structured tzelem Elokim.

After participating in several trips, I am now friendly with some of Rav Moshe’s close talmidim. His loss seems to them an unsurpassable void. Rav Moshe was our yehi ohr in a world of tohu. May Hashem grant us the ability to carry on and emulate this great gaon and tzaddik to the best of our ability.