View From The Ezras Noshim 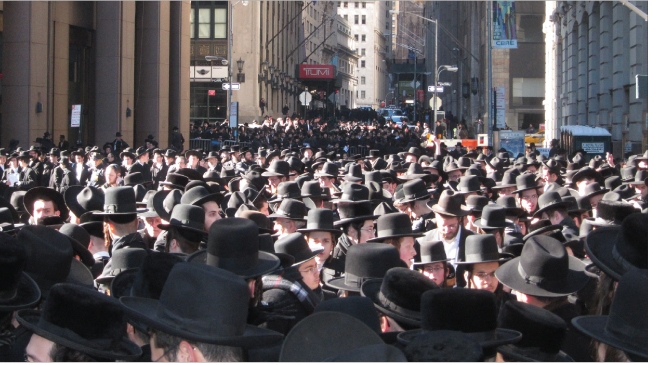 It was an experience that doesn't lend itself easily to description. But I'll try. Sandwiched among a sea of women and girls, davening minchah along with over 50,000 Yidden, feeling our collective tefillos ascend on High, was a powerful wake-up call. I would dare to compare it to tefillas Ne'ilah on Yom Hakippurim, just a week before Purim.

What struck me most of all, aside from the sheer number of Yidden who kept flocking in seas of black converging from all sides of Lower Manhattan, filling up the historic Wall Street area, was the absolute decorum.

With a crowd of that size, maintaining law and order is always a challenge. In response to the expected turbulence, there were hundreds of police officers deployed at every street corner, waiting for trouble, for some type of melee or disturbance.

In my humble opinion, such an orderly, peaceful gathering of such a large group of people in one, small area is unprecedented.

From 1:57 until 2:20, as my daughters and I waited for minchah to begin, we stood near the barricades (taking care not to lean on them), watching as two harried officers shepherded a group of women and girls away from a prime viewing location and into another, more densely crowded area. Several elderly women who had sat down on a bench were unceremoniously told to vacate the area.

To no one’s surprise, there was not a single argument or murmur in protest. Everyone did as told and remained docile, obedient, pleading before Our Father to hear the collective cries.

I must confess that my “ordinary” minchah, recited when I manage to carve out some time during the afternoon, is often a hurried event. On Sunday, the tefillas minchah was a rare treat, an opportunity to daven without any distractions. After all, when was the last time we were given the gift of baring our hearts in the company of tens of thousands, all of us davening for the very same request?

During the kedushah, the sea of “Omein yehei sh’mei rabbahs” pierced the very heavens, ricocheting through the streets of lower Manhattan, the financial capital of the world. We then said Tehillim in unison, possuk after possuk, the echoes reverberating through the sound system, permeating our souls. As we davened for the Yidden of Eretz Yisroel, we also had the numerous cholei Yisroel who are desperately awaiting yeshuos in mind. One needed a heart of steel to remain dry-eyed during such an eis ratzon.

At the conclusion of the “Neilah” in Lower Manhattan, after a poignant recital of Avinu Malkeinu and Selichos, we cried, as one, “Hashem hu ho’Elokim,” and the Heavens parted.

And then, a few moments later, it was over. The sea of black began to disperse.

Once again, the police stood, ready and waiting for the disturbance that never occurred. The only slight diversion that broke the somber mood was when a group of young boys received a ticket. Their dubious crime? Trying to catch their bus, which had begun to pull away from its parking spot. There was nothing else to grab the attention of the media, no lunatics waving signs and shouting protests, no smart-alecs talking into the cameras and using the moment to advance their own agenda.

It was simply a gathering of family, who had all joined to show solidarity with our brothers and sisters across the ocean, to identify with their pain, and daven that the terrible decree be repealed.

It was a gathering to defend the honor of the Torah Hakedoshah, an atzeres whollyl’sheim Shomayim.

There is so much more to say. For once, though, I am speechless.