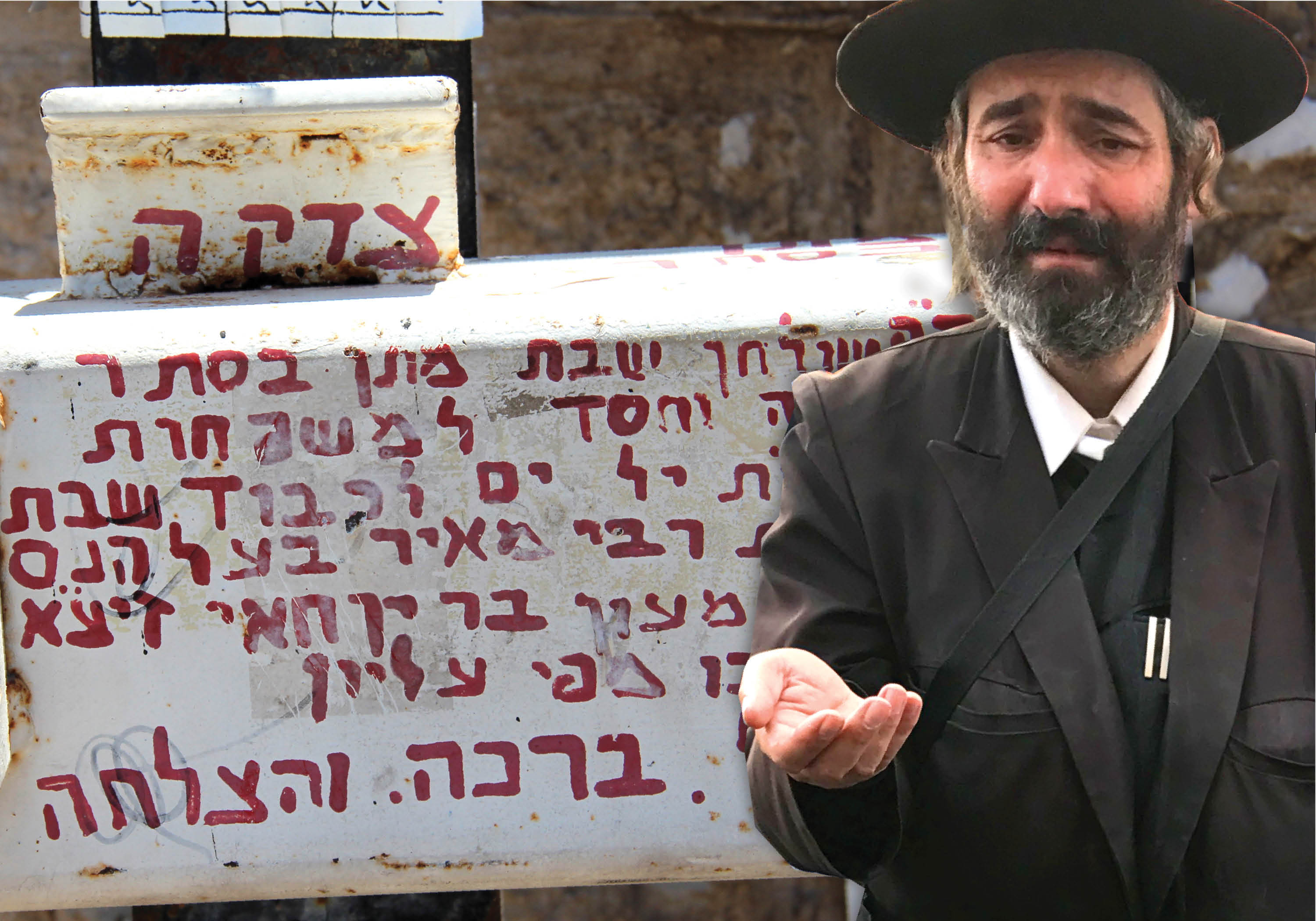 With Elul upon us, the mood in Jewish communities is changing. The frivolity and care-free attitude of summer are gone, having faded out for the more severe tone of Elul. Serious days are ahead and we need to prepare.

A person who stands trial and groups awaiting a governmental decision on their fate as independent citizens look for people to write letters for them, sign petitions, and submit amicus briefs.

With so much at stake, Elul is a time when we rectify our actions so that we may be judged as righteous people. We also engage in specific mitzvos, which serve as “petitions” to Hashem on our behalf. We engage in tzedakah, as Chazal have taught that engaging in charity is a source of merit and protection.

The Arizal found a hint to this, for the last letters of the words “utzedakah tihiyeh lonu ki” in a posuk in Devorim (6:25) spell the name of Hashem.

The avodah of Elul is to bring ourselves closer to Hashem. We do that mainly by atoning and ridding ourselves of our aveiros of the past year, because sins cause a separation between us and Hashem. Another way to endear ourselves to Hashem and become closer to Him is through engaging in acts of tzedakah. When we put a dollar in the hand of a poor person, we are, so to speak, sending a letter to Hashem, indicating our righteousness.

Tzedakah is not only performed with money. It includes helping people, speaking to them, or cheering them up with a smile, while offering encouragement and giving them the strength to withstand a difficult period.

It is not always difficult to enhance the life of another, but the reward is immeasurable, for by doing so, Hashem will enhance our lives and those we care about. It is always a good idea to be a giving person, but during the month of Elul, it is most advantageous, for “tzedakah tatzil mimovess,” charity saves people from death.

Over a century ago, on an Elul night, the Alter of Kelm had a dream. He dreamt that Rabbeinu Yonah was coming to visit Kelm. A sign went up announcing that at a certain time, the great Rishon, author of classic mussar works studied throughout the ages, would be delivering a discourse in the large shul in the center of town.

Everyone in town headed for the shul. Men, women and children left their homes to hear the Torah giant. It was definitely a once-in-a-lifetime opportunity and nobody wanted to miss it. It promised to be the greatest Elul shmuess in many centuries, and if there were people who could appreciate that, they were the residents of Kelm.

There was no way everyone could fit into the shul, so the local machers placed security guards at the door. Only men they recognized to be great would be allowed in. Everyone else would have to stand outside the windows and hope to hear a few holy words here and there.

Of course, to hear even one word spoken by Rabbeinu Yonah would be special, but who could be satisfied just with that?

The Alter of Kelm, when hearing about the special guest, also headed for the shul, but when he got there, a guard refused to let him in. The guard asked him his name. He replied, “I am Simcha Zissel of Kelm.” The guard replied that he never heard of him and that he would have to leave and make way for the important people of the town.

Although he was usually very humble and would have walked away without making a commotion, this time was different. There was no way the Alter would forgo the opportunity to see and hear Rabbeinu Yonah, so he began to pester the guard. He started mentioning his yichus, but that was of no help. Then he said, “Do you know who my rebbi is? I am a talmid of Rav Yisroel Salanter.” That was also of no help. “I heard of Rav Yisroel Salanter,” the unlearned guard said, “but I never heard of his student, Simcha Zissel.”

At that point, the Alter awoke, shaken from his dream. He quickly sent for his son, Nochum Velvel, to find out what zechus he had that in his merit the door was opened to enter the Elul shmuess of Rabbeinu Yonah.

Reb Nochum Velvel went to his father and heard the story. He could not think of anything special that he had done to be a greater source of merit than the zechusim of his father, the famed mussar great and head of the yeshiva.

After much prodding by his father, the humble son sat and contemplated all he had done over the prior months. And then he told his father the following:

Due to his poverty, he walked around town with worn-out shoes. They were not only worn, but also torn and held together with string. During one of his many trips to the shoemaker, he saw a nice, new, strong, comfortable pair of shoes for sale. As much as he needed them, he couldn’t afford them. That day, he began saving up money to purchase those shoes. He had very little money to begin with, so the project took some time.

Finally, his pennies added up and he had enough money to buy the shoes. He headed to the shoemaker and purchased the footwear, which were not only comfortable and protective of his feet, but also befitting his stature and position in the yeshiva. He suspected that they would also help him make a better impression when he went to see wealthy individuals on his fundraising missions.

That night, there was a snowstorm and a cold wind was blowing fiercely. He was anticipating going out to daven with his feet covered for the first time in a long time, but before he got to go anywhere, there were knocks on his door. Reb Nochum Velvel opened the door to find a poor man with ripped clothes, shivering from the cold. He brought him into the house, warmed him up, gave him a few kopeks, and was about to send him on his way.

But then he looked down at the man’s feet. The poor guy had no shoes and was trudging about in the snow with shmattes wrapped around his bloodied feet. The man saw the rov looking at his feet and explained that he could not afford shoes.

Rav Nochum Velvel went over to his new shoes, the ones he had saved up for over so long. He didn’t say anything. He just picked them up and handed them to the beggar. End of story.

The Alter looked at his son lovingly. He now understood why he would be allowed into the Elul shmuess of Rabbeniu Yonah in the merit of his son.

The zechus of tzedakah is such that it breaks down all barriers, as we say in the tefillos of Yomim Noraim, “Useshuvah, usefillah utzedakah maavirin es ro’a hagezeirah.” Teshuvah, tefillah and tzedakah have the power to overcome even an awful gezeirah.

In these days, leading up to the Yomim Noraim, as we all seek sources of merit for ourselves, helping others as the son of the Alter did is one sure way to go. Thankfully, in our day, people are not as poor as they were back in Kelm, but there are many who could use some help. It may even be that our friend can’t afford the nice ties that we wear. It wouldn’t hurt us to part with one and let the other fellow feel as good about how he looks as everyone else does. The examples and opportunities are many if we would care enough to notice and do something about what we see is lacking by other people.

Reb Nochum Velvel did more than his obligation of tzedakah. He had special zechuyos because he had mercy on another person, and as Chazal (Shabbos 151b) say, “Kol hameracheim al habriyos, merachamin olov min hashomayim. Hashem has rachmanus on a person who has rachmanus on others.”

As Elul begins, it appears that we have a daunting task ahead of us to right everything we did wrong and straighten ourselves for the Yom Hadin. Being a meracheim on other people, including helping them financially with tzedakah or some other form of charity, gives us a head start, bringing us into Hashem’s good graces and helping set us on the path for a healthy, happy, successful, peaceful and good year.