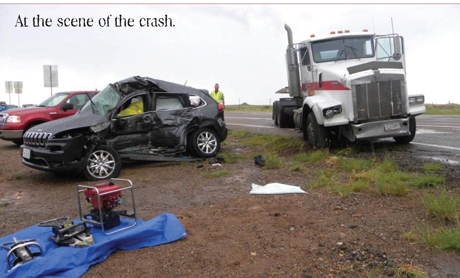 These words are being written amidst sadness and tears, as Klal Yisroel grieves following the tragic passing of Hindy Spira aâ€h, 26, and Raizel Morgenstern aâ€h, 24, in a horrific accident on Monday. Hindy and Raizel were driving with two friends, Suri Mayerowitz and Miriam Meyer, in Holbrook, Arizona, when the accident occured at the intersection of Routes 77 and 377, as the girls' rental vehicle was hit by an empty tractor trailer.

Hindy and Raizel were seated in the front of the car, while Suri and Miriam were in the back.

The girls had spent Shabbos in Los Angeles with their friend, Rochi Engel, formerly of Brooklyn. They were heading to Petrified Forest National Park in northeastern Arizona, located about eight hours from Los Angeles.

Both Hindy and Raizel were described in the most glowing terms, as family, friends and colleagues highlighted their wonderful personalities, warmth, sensitivity, and ehrlichkeit, and how beloved they were by all who knew them.

“There was nothing they wouldn’t do for others,” a friend said. “They brought such joy to others and such nachas to their families. There are no words to describe how special they were or the feelings of devastation amongst those who knew them.”

Hindy was a daughter of Reb Yitzchok and Mrs. Sarah (nÃ©e Deutsch) Spira of Boro Park. She attended Tomer Devorah for elementary school and high school, and had been working at Bais Yaakov of Boro Park, where was was a star teacher and a favorite of both students and her fellow mechanchos. She was supremely devoted to her fifth grade students and also ran the after-school program with immense dedication.

“She was talented, creative, and so caring,” a colleague at the school told the Yated. “She was always trying to help everyone else in any way she could.”

Hindy cared so deeply about her students.

“She looked to see how to give these children what they need,” a principal at the school said. “The time she devoted to her students was extraordinary. She could get these children to accomplish anything, because of her belief in them. Her yashrus and integrity were astounding. She never cut corners.”

One of her fellow teachers at the school is Mrs. Bas-sheva Alpert, whose daughter, Chaya Malka bas Bas-sheva, is in need of a refuah shleimah. Hindy was constantly trying to think of programs and undertakings as a zechus for Mrs. Alpert’s daughter.

On Monday, the day of her petirah, it was Hindy herself, despite being on vacation on the West Coast, who recorded a message on the “Ki Chol Peh Lecha Yodeh” contest hotline. The contest was established as a zechus for Chaya Malka bas Bas-sheva, with prizes awarded to the youngsters who participate. Listening to the message, one could hear the joy for life that Hindy personified. In her message, recorded shortly before her petirah, Hindy says, “Let’s hope to share besuros tovos very shortly.” Her voice is rich with simchah and her upbeat persona is almost tangible.

Hindy would regularly tell Mrs. Alpert that she’d like to do more for her daughter, and she endeavored to come up with initiatives as a zechus for Chaya Malka bas Bas-sheva. When she was in Florida, Hindy called Mrs. Alpert to obtain copies of the hilchos Shabbos sheets that are published as a zechus for Chaya Malka so that she could place them in the local shuls. With Hindy, every moment was utilized to help others and consider their needs.

“She was bubbling with ideas and projects,” a friend related. “There were brachos parties and an asher yotzar program in her after-school program, and all kinds of creative ventures in her own classroom.”

The youngest of eight children, Hindy displayed remarkable kibbud av v’eim, while also making herself available to her four brothers and three sisters, all of whom are married.

“She was in the parshah of shidduchim for a while, and her friends, and her siblings’ children, were already getting married, yet she celebrated each simchah with true happiness,” a friend related. “One would have never known that Hindy was a bit older. She never viewed herself that way. She was a person who celebrated someone else’s simchah as her own, even though she was seeking the very same yeshuah.”

Hindy had great aspirations, and in addition to constantly working on herself, she desired very much to marry an outstanding ben Torah.

“She had big she’ifos, great expectations, and left no stone unturned in trying to reach her goals,” said a friend. “At the same time, she was so sensitive to others, always smiling and making others feel good.”

Raizel Morgenstern grew up in Boro Park, the daughter of Reb Moshe and Mrs. Ruthy (nÃ©e Jacobs) Morgenstern. The fourth of eight children, she attended Tomer Devorah Elementary School and Bais Bracha High School. She then joined Bais Yaakov Intensive Seminary and was an eleventh grade teacher at Tiferes Miriam.

“Raizel always had the nicest word to say to everyone,” a friend shared. “Her simchas hachaim was contagious and she lived each day with the fullest appreciation of the brachos bestowed upon her by Hakadosh Boruch Hu.”

She endeared herself to one and all.

“Everyone she knew felt close to her,” said the friend. “She lit up a room when she entered and brightened the days of those she encountered.”

Raizel was compassionate and gave her all to her students.

“She was always available,” her friends said. “She was completely ibbergegeben and she always did things with a shleimus.”

Raizel was multi-talented. She knew how to sing, play music, act and dance, yet she was extremely refined and self-effacing.

“It was so unique to find someone so ultra-talented, yet so humble,” a friend said.

Her friend shared that they once went to a party to benefit Hatzolah, where it was discovered that the music at the event had been played and pre-recorded by none other than Raizel. Always modest, she hadn’t said a word about it.

“She had extraordinary talents,” her friend said, “yet she never spoke about it. She carried herself with humility. By looking at her and speaking to her, you would have never known how skilled she was in so many different areas.”

At night and at other times, Raizel would record music for people, who would visit her basement, often accompanied by friends.

“People would come at all times, and sit with her for hours on end, and yet she was always so patient,” her friends recalled. “It was amazing how courteous and polite she was no matter how tedious the job was or how long it took. She never lost her cool. She was always so calm, so collected, so level-headed, and nothing was ever a problem.”

Her dikduk b’mitzvos stood out as well. “Even when it came to something difficult,” a friend stated, “she would say, ‘Halachah is halachah, even if it might be hard.’”

Even with regard to something as mundane as texting, Raizel’s middos shined.

“Everything she wrote was expressed with class and dignity,” one of her friends said.

“In classic Raizel style,” the friend recalled, “she wrote back to me in a way that made me feel so good, as she always did. ‘I feel so bad,’ she wrote. ‘But it’s the thought that counts.’ And then she wrote, ‘I have good friends.’”

Raizel had an ability to make everyone feel good, always saying the most appropriate things and touching others in a way that uplifted them and empowered them.

“Raizel was tons of fun, filled with so much life,” her friends said. “At the same time, she was so regal and queen-like. Perhaps that is why she was so loved. She was nimtza chein be’einei Elokim b’adam.”

One of her friends wanted to teach her students about the 50 states and asked Raizel if she could pay her to create a recording for this purpose. As was her wont, Raizel was thrilled to help her friend, stating that she had a recording perfect for this purpose, but she would not even consider taking money for it. Helping her friend was the greatest reward she could imagine.

Those who knew Hindy and Raizel are inconsolable.

“Hakadosh Boruch Hu came and took two beautiful roses, two of His most precious diamonds,” said a friend of Hindy and Raizel. “He could not have chosen two more beautiful neshamos.”