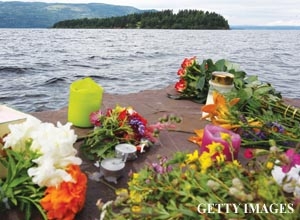 Think of the parents. Think of what they are going through. The massacre in Norway over the weekend by a psychopath is all over the news. First he bombed a government building in downtown Oslo, killing 6 people. Then, while the entire country and police force were distracted, dealing with that bombing, the murderer took a boat to an island where some 300 teenagers were camping and began gunning down the teens in cold blood. He murdered over 60 defenseless, innocent people on that island, most of them teenagers. Before we even attempt to understand the reported motives of the killer and prior to analyzing much of the cynical, knee-jerk political maneuvering so close to the killings, let us contemplate the human tragedy.

THE INESTIMABLE VALUE OF A HUMAN BEING – A TZELEM ELOKIM

We should have a feeling of being noseh be’ol with Hashem’s creations, with all of those people in Norway who have had their loved ones cruelly ripped away from them, with such evil, malice and brutality, especially now, when we are collectively mourning the recent brutal killing of one of our own.

When I think about all of those broken people in Norway, people created in the image of G-d, both those whose last moments of life were lived in terror as they watched the butcher systematically killing their friends and the family members who will never know peace in their lives, I am reminded of an incident. I read about it in the sefer on Rav Meir Chodosh zt”l, famed mashgiach of Chevron, written by his daughter, Rebbetzin Shulamis Ezrachi.

During World War I, Rav Meir was forced to flee, together with the Slabodka Yeshiva, deep into Russia in order to avoid the carnage on the warfront. After tremendous difficulty travelling through war-torn Russia, the group came to the city of Kremenchug. To their dismay, they found the inhabitants of the city starving from hunger. Almost no food was getting through and the Jewish community there did not have food to share with the refugee yeshiva students.

Meir Chodosh, a bochur at the time, and several others were appointed to scout the neighboring villages to see if they could perhaps find some food. The yeshiva bochurim inadvertently ran into a group of marauding soldiers and were almost killed. Fleeing for their lives, they eventually found refuge by falling into a wet, muddy field with high grass. Meanwhile, they hadn’t eaten in over two days.

Rav Meir related: “Finally, we were able to leave the field. We came to a tiny village, covered from head to toe in mud, exhausted and starving. Suddenly, a non-Jewish farm woman holding a large loaf of bread came out to meet us. She looked at us with mercy and said, ‘Take the bread. I see that you are starving. Please take it and eat it in good health.’ The look of pure mercy and the goodness of heart with which she gave us that bread were so profound that her kind face is still etched in my mind. Until today, I can’t forget that look on her face as she held out that precious loaf of bread for us.”

Rav Meir, the quintessential baal mussar, ended off by saying, “This is what Chazal mean when they say, ‘Choviv adam shenivrah betzelem.’ A human being is so dear, because he was created in the image [of Hashem].”

All of those people in Norway who are mourning loved ones are experiencing unspeakable suffering. All of those who lost children in the massacre on the island have lost their entire world. If our instinctive sense of rachmanus is not aroused when we hear about such incidents, it shows that we have not internalized the appreciation of a tzelem Elokim.

Perhaps this is why the political posturing that started within a few hours of the tragedy is so reprehensible. When pundits can’t even find the time to mourn for at least 24 hours, it is simply disgusting. Some pundits and politicians with vested interests see a tragedy as an opportunity to capitalize on their own agendas. It almost seemed as if they were happy to have a tailor-made tragedy to enable them to shove their own political and social agendas down the throats of the public.

What was the agenda? The cold-blooded murderer was a 32-year-old Norwegian national named Anders Behring Breivik. Apparently, he was a racist who was furious over the fact that Norway was allowing immigrants through its borders. He left behind a disjointed manifesto that blamed virtually everyone for ruining Europe and Norway with the influx of immigrants.

Now, in the immediate aftermath of the tragedy, the entire left-wing media apparatus and political operatives have begun the march in lockstep to demonize anyone who dares question the nature of radical Islam and its millions of adherents worldwide.

This person was a sick psychopath. Just the fact that he did not let his wrath out on the immigrants who were the objects of his hatred, but rather on his fellow Norwegians, offers a glimpse into his distorted mind. It is this obviously sick, butchering psychopath who is now being used by all of the fine souls writing for the New York Times, USA Today and numerous other publications the world over in their attempt to forcibly muzzle anyone with less “enlightened” views than they have. USA Today reported, “Islamophobia has reached a mass murder level in Norway as the confessed killer claims he sought to combat encroachment by Muslims into his country and Europe…”

The New York Times made sure to write in its headline that he was Christian, although it seems that he wasn’t religious at all. Leave it to the Times to make sure to take a swipe against religion whenever possible. Jared Loughner, the psychopath who killed a whole bunch of people and injured Congresswomen Gabrielle Giffords earlier this year, was an avowed leftist. Of course, the Times didn’t put that in its headline or even in the body of the article about the murders. In fact, the Old Grey Lady tried every trick in the book to try to link him with right-wing extremists.

Astute columnist Mark Steyn put it succinctly when he wrote, “Free societies can survive the occasional Breivik. If Norway responds to this as the Left appears to wish, by shriveling even further the bounds of public discourse, freedom will have a tougher time.”

As for this writer, perhaps the most unsettling thing is the degree of opportunism that exists out there. This is a colossal tragedy. But instead of at least mourning with the victims and their families for a couple of days, the entire focus has been diverted to name-calling: Are you a racist or aren’t you? Is there Islamophobia or isn’t there? Should we stop monitoring Muslims and focus on white supremacists or not?

Shame on all of them!