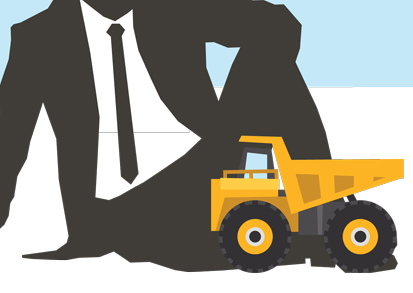 Imagine walking into a posh Manhattan office building and being escorted by one of the uniformed doormen up to the fifth floor, which is entirely taken up by the company with whose head of marketing you have an appointment. Your escort leaves you at the door to the main office, telling you to go in, make a right, and present yourself to the receptionist. You go in, but, distracted by the sheer wealth displayed all around you, you make a left instead of a right.

Rather than being greeted by a receptionist, you find yourself facing a long plush-carpeted hallway. Still unaware of your mistake, you wonder if your escort perhaps meant for you to walk down the hallway and through the door at the far end where you would find the receptionist.

The hall is long and unusually quiet, and, somewhat unsettled, you push open the door at the far end without thinking to knock first or check for a nameplate on the door. You open the door – and stop short. There, on the floor, in a crumpled custom-tailored designer suit, is the company’s billionaire CEO, whom you instantly recognize. After all, his face is prominently featured in all the business papers. The man is on his knees, pushing a bright yellow Tonka dump truck and crawling after it, while making guttural noises with his throat, which you assume is supposed to resemble those of a real dump truck.

The CEO hasn’t even noticed you – so engrossed is he in his play – so you quietly step back outside, closing the door behind you. You take a deep breath and try to steady yourself. Boy, that could have been uncomfortable! Still, you are in a state of shock. What are you to make of the sight you just witnessed? Could anyone have ever imagined such a thing?

There is no question that the sight of any grown man entertaining himself by zooming around with toy trucks is an embarrassing one. One would have assumed that by this age and stage, he would have moved on to more appropriate forms of enjoyment. The same could be said about a group of women in their twenties, or fifties, sitting around and holding a tea party for their dollies. There may be nothing wrong with it, no prohibition against it, but it is utterly embarrassing.

Shockingly, however, we see such sights, in our daily lives and pictured prominently in the papers, all the time. What is worse is that we are often the ones in those pictures.

How can that be, you ask? You’re sure you haven’t played with trucks or dolls in quite some time now, other than with some kiddies perhaps. What we overlook, though, is that there are various kinds of “toy trucks” and “play dolls” out there.

Ours is a generation seeped in material excesses. The glossy, glitzy, full-page ads with which we are bombarded on an almost-daily basis in our own “heimishe” circles touting the piece of “mouthwatering meat you will remember for a lifetime,” or asking whether “you go crazy when you can’t get the perfect sushi you truly deserve,” are perhaps (perhaps!) not prohibited in any way. What’s wrong with enjoying, in a “kosher” atmosphere with top “kosher” certification, every last type of available pleasure?

There is nothing wrong with playing with Tonka trucks or American Girl dolls either. It would be highly embarrassing, though, to feature a picture of us in the papers doing so.

We recognize the immaturity and silliness of engaging, let alone embracing, the world of children’s toys and make-believe play. Since this is recognized almost universally by all, we would indeed be mortified to be seen engaged in such activity, let alone featured prominently in the papers doing so.

How mortifying. One doubts that such a humiliating event will help garner many (if any) supporters.

In our whole-hearted and multi-faceted embrace of all things pleasurable (clearly influenced by the hedonistic world in which we live), all with a mehadrin hechsher, of course, we’ve forgotten that in our worldview, in a worldview that recognizes the truly important things in life, the pursuit of pleasure is as vacuous, inconsequential and immature as they come.

To be sure, such misguided pursuit is nothing new, having been around since the yeitzer hara was created. Even the most respectable people struggle, daily, with their yeitzer hara, and one cannot summarily dismiss anyone who has not yet overcome his lesser inclination as being no more respectable than an adult who is acting like a complete imbecile. What we must recognize, though, is that the yeitzer hara’s pull towards all sorts of immature and immaterial pleasurable is indeed imbecilic. Hashem has given him the power to fool us, and it is thus normal for even the most intelligent people to be fooled at times. We must realize however, that at such times, we are being taken for fools.

As long as we recognize that, we’re pretty much okay. We’re in the normative realm of avodas hayeitzer, working on perfecting ourselves and our inner drives. The world of superficiality, of fleeting pleasures that fill our bellies and tingle our external senses while leaving our inner selves utterly void of any fulfillment, manages to fool us now and then (sometimes now more than then!), and we work to fight back and to reclaim what is really important to us.

The problem is when we begin to embrace foolishness, immaturity and imbecility and put them up on a pedestal. When rather than being seen as a normal weakness that people fall for on a regular basis, we advertise gashmiyus and complete emptiness as being some sort of ideal or great thing, we’ve entered into the twilight zone of grown men and women playing with dolls and toy trucks and not even realizing how silly and imbecilic they look.

Suppose one works in a daycare center where two types of meals are delivered for the children and care-givers. There are bags containing cold cut sandwiches, and other bags that offer a health salad. The bags are clearly labeled “Cold Cuts” or “Health Salad.” There is a room of children where, for allergy or other issues, only the health salad bags are brought in. An unscrupulous worker in that room wishes to bring in a cold cut sandwich for herself, but knows that if anyone sees her bringing in a bag bearing the “Cold Cuts” label, she will be summarily dismissed from her job.

What does she do?

She has a third option, though. She can place a label that says “Health Salad” right on top of the label which stated “Cold Cuts.” By doing so, by placing a shtempel or hechsher upon it, by mislabeling the very product itself, she can now bring her bag where it would never have gone before (based upon a similar moshol heard in the name of Rav Matisyohu Salomon).

It is one thing when blatant excesses are understood to be such. This does not stop people from desiring “just a bit” of those excesses. It takes a lifetime of work to view those excesses as empty and meaningless, and to actually be turned off and disgusted by the wastefulness inherent in their pursuit. At least one is cognizant of what he is up against. He knows that, ideally, he should be more in tune with his ruchniyus rather than be subsumed by his gashmiyus.

When we take the most hedonistic, self-indulgent and totally superficial pursuit of self-gratification, though, and we stamp them as pursuits worthy of respectful people and organizations, we’ve lost all hope. We end up publicly posing in front of our toy trucks, our play mentchies, our sumptuous selection of dripping ingestibles, our dollies, our dream homes and our napkin collections, without the slightest sense of what fools we are making of ourselves.

We become the CEO on the floor engrossed in his Tonka toy, and we don’t even know it.

Of course, being the great, giving and special people we are, in our essence we are clearly above such silly and vacuous behavior. If we do act that way, it’s but a temporary insanity, because we surely understand that rather than spending hundreds of thousands of dollars buying ourselves toy trucks and dolls to play with, we can accomplish truly meaningful things and buy eternity with the resources, the gifts and the bounty Hashem has bestowed upon us.