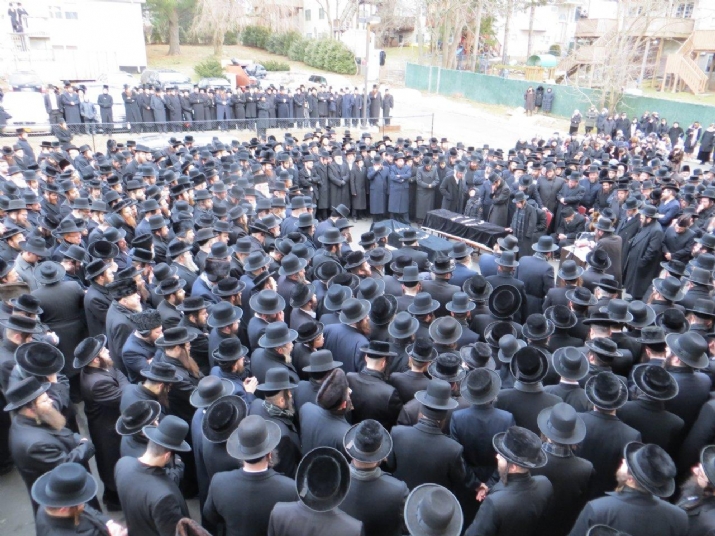 There is nothing to say. We feel numb. Shattered. On Sunday afternoon, there was a double levaya. The cries of pain and grief ascended to the very heavens. Tisha B'Av has intruded a joyous season, just a few days after Purim, with an unfathomable tragedy that shook us up and wrung us out. A young, sweet couple, on the cusp of parenthood, were taken from us after a hit-and-run collision involving a drunk driver and a convicted killer who ran from the scene.

The pain and heartbreak are immense. We’re all in a daze. Unable to function or do much of anything.

Nachman and Raizy Glauber were the sweetest young couple. They were married barely a year ago. I recall his mother, who sits next to me in shul, calling to reserve my guest room for the aufruf. Nachman, her eldest child, her pride and joy, was my son’s classmate in cheder. He was a boy with a golden heart, who would give the shirt off his back for anyone.

His young wife, Raizy, nee Silberstein, was her parents’ beloved youngest child. She was brilliant and astute, yet exceptionally modest and refined. Raizy enjoyed a beautiful, loving relationship with her mother-in-law, who had only boys, and considered her the daughter she never had.

This wonderful, sweet young couple, who enjoyed exceptional shalom bayis, were chosen as pure and holy korbanos to atone for Klal Yisroel. On Motzoei Shabbos, the 21st of Adar, the yahrzeit of Rav Elimelech of Lizensk, the Ribono Shel Olam chose the purest and most precious sacrifice.

It was shortly after midnight when the young couple ordered a taxi to take them to the hospital. Raizy, who was expecting, was feeling unwell, and she wanted to make sure everything was okay. Nachman and Raizy were on the outskirts of Williamsburg, at the quiet intersection of Kent Avenue and Wilson Street, when tragedy struck.

A gray BMW driven by convicted killer Julio Acevedo, who had spent eight years in jail for murder, careened onto the scene at high speed, crashing into their taxi and sending it spinning out of control. He is still at large and there is a reward being offered for his capture. The impact was described by observers as being “like a bomb going off.”

The force of the crash threw Raizy out of the car. She landed under a parked trailer, while Nachman was tragically killed on impact. The taxi driver, Pedro Nunez Delacrus, was saved by his airbag and called 911 for assistance.

Hatzolahparamedics were on the scene within moments. The car was cut open to remove the trapped victims. A few moments later, Raizy was rushed to the hospital, where doctors delivered her newborn son.

The Hatzolah volunteers were stunned by the force of the crash and its tragic aftermath. Next came the unenviable task of notifying the parents that their beloved children were no longer alive. Reb Yaakov Klar of Chai Lifeline, who resides in Monsey, was asked to visit the Glauber home, while other askonim notified the Silberstein family of their loss. Friends and family soon gathered to offer chizuk and be there during this initial grief.

As the tragic news spread like wildfire, all that night and into the next morning, Klal Yisroel said Tehillim and stormed the heavens for the survival of the newborn, his parents’ Kaddishel. Sadly, the infant joined his parents in Gan Eden a day later.

The horrific triple tragedy reminded me of a story I’d read in Rav Ephraim Oshry’s “Shailos Uteshuvos Mimaamakim,” a chronicle of the desperate shailos that were posed to the Kovna Rov during the war years and hidden in scraps of paper under the ghetto. This particular tragic story occurred in the Warsaw Ghetto in the early 1940s, when Jewish blood was hefker.

A young Jewish expectant mother was shot in cold blood by a Nazi and rushed to the hospital, barely alive. The Jewish doctors quickly asked an emergency shailah: Was it permissible to try and save the baby, and perhaps inadvertently hasten the woman’s passing? The rabbonim paskened that it was permitted to save the child. The newborn was born healthy a few minutes later, a triumph against the evil Nazis.

Tragically, the bloodthirsty Nazi butcher returned to the hospital a few minutes later to gloat about his “accomplishment.” When he saw that the baby survived, he murdered it brutally, on the spot.

I remembered being very shaken by the story, which to me epitomized the horrors of the Holocaust.

We huddled on Sunday afternoon in the bitter cold, sobbing and shaking, our hearts broken, watching two sets of parents bury their children. Nachman’s parents, who made a bris for their own newborn son only a week ago, now bid goodbye to their eldest, their pride and joy.

The levaya in Williamsburg, which was attended by thousands, was especially heartbreaking. Hespeidim were delivered by Rav Zalman Leib Teitelbaum of Satmar; the Limanover Rov, with whom Nachman had a close relationship; and Raizy’s brokenhearted father, who told his precious youngest child, “I will never forget you.” Raizy’s brother also delivered a moving hesped.

At the levaya in Monsey, which I attended, Nachman was eulogized by Rabbi Yoel Braun, one of his maggidei shuir, who recalled his golden heart and refined nature, and how he would offer to learn with anyone who needed a chavrusah. When he was a young boy, he once discreetly paid trip money for a classmate who couldn’t afford it, never boasting about what he’d done.

Nachman’s grieving father, Reb Yom Tov Glauber, was maspid, his broken sobs echoed by the wails of hundreds, our united cries of grief ascending heavenward. “Oy, Nachman, Nachman, you were so dear and precious, so beloved.”

Nachman’s uncle then delivered a moving hesped, followed by Rav Chaim Yehoshua Halberstam, Satmar Rov of Monsey, who recalled Nachman’s d’veikus during davening and the warmth with which he said Tehillim. Rav Chaim Yehoshua mentioned Nachman’s longtime habit of waking up before dawn to learn and daven. In fact, he was one of the founders of the pre-dawn Shovavim project through which hundreds of bochurim and yungeleit gather in the Satmar Bais Medrash on Thursday nights to learn.

The Rebbe exhorted us not to allow this tragedy to pass without undertaking one kabbolah, now, when we were all so shaken, as this was clearly a powerful message min haShomayim.

Nachman was always seeking to improve his relationships, bein adam laMakom and bein adam lachaveiro. Indeed, he was a golden boy. A former classmate, S. Z. Friedman, recalled his kibbud av ve’im, his close and loving relationship with his parents, and his desire to help anyone in need. In yeshiva, before he would go to sleep, he would listen to tapes on Chovos Halvovos and other sifrei mussar. He once “adopted” a classmate, who was a ger, raising thousands of dollars for him and asking his parents to take the boy into their home.

This wonderful young couple radiated contentment and joy, bringing untold nachas to their parents. Nachman learned in kollel, while Raizy worked as an office manager in a busy real estate office, running the entire business with her capable hands. She was such a content young wife, always smiling, trying to do chessed and help others, and running her own home smoothly.

Nachman and Raizy were looking forward to the next stage in their lives, raising their child together. Now they are all together in a better world, leaving two sets of families to grieve.

Indeed, all of Klal Yisroel is grieving. The loss of such beautiful flowers, torn from their roots, has upended the natural law and order of the world. Such events are not ‘supposed’ to happen, but they do. They shatter us from our complacency, spurring us to cry out, “Tatteh, save us! We can’t bear it anymore!”

May the day come, very soon, when Hashem will erase our collective tears, with the arrival of the geulah sheleimah that we so desperately yearn for. In the meantime, may the Glauber and Silberstein families be granted strength from Above to overcome this unspeakable loss. And may Klal Yisroel no longer experience such agonizing pain and suffering.