There for the Taking 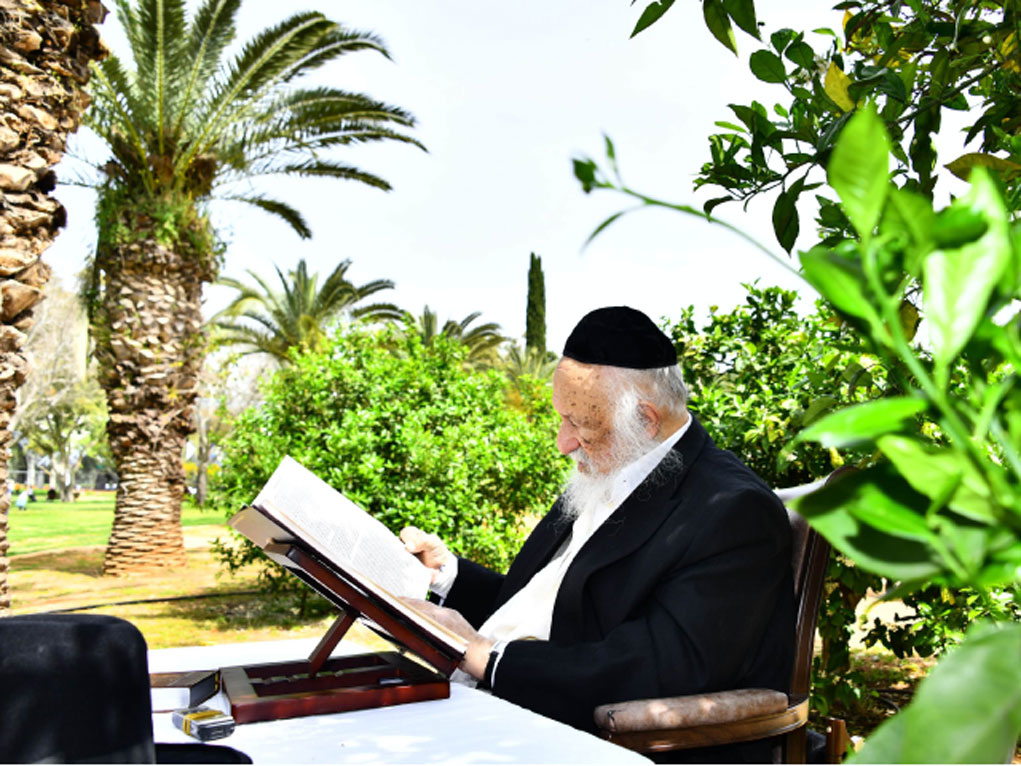 We don’t have to be too knowledgeable to recognize that the world is sinking to levels unparalleled since the days of Greek and Sedomite hedonism. You don’t have to be a student of history to be able to perceive how pathetically immoral and debased the world has become in just the past few years. The nosedive is driven by the culture elites, promoted by the media and codified by “progressive” lawmakers and government leaders.

We see people assuming power through lies and subterfuge. Take a look at the Israeli government. The prime minister heads a small party named “The Right.” He ran to the right of Netanyahu and promised not to partner with leftist anti-religious Yair Lapid or the Muslim Brotherhood affiliated Raam party to form a coalition, which is exactly what he did.

With a small yarmulke pasted to his head, he has collaborated with other ostensibly religious ministers and rabid secularists to upturn religious Jewish influences and wreck the lives of chareidim through onerous laws and regulations. They have regularly capitulated to Arab blackmail, spending hundreds of millions of shekels to keep them in the coalition. They have connived, as well, to assist Raam’s constituents in every way conceivable to the detriment of the state.

Yet, the coalition remains in power and people wonder how and why.

Security is increasingly failing, and terror attacks and lawlessness mount. Iran and its allies in the region on Israel’s border lurk menacingly. President Biden is planning to visit in a few weeks and unleash a propaganda storm on behalf of the Palestinians.

In the United States, we aren’t doing much better. The president and his administration have been proven to be inept in foreign and domestic leadership. The economy is teetering, as the inflation caused by their wasteful spending is raising prices to historic levels and collapsing markets. With miniscule public support, the president and his gang press on with their progressive socialist agenda. The only hope of stopping their destructive policies is a Republican takeover of Congress in November.

People who claimed that elections have no consequences and all politicians are the same had a rude awakening and lessons we hope they will remember.

The answer is in this week’s parsha of Bechukosai, laid out clearly for us and others to follow. The posuk states: When will you be blessed? “Im bechukosai teileichu v’es mitzvosai tishmeru va’asisem osam.” If you will follow the chukim and mitzvos of the Torah. It is right there for everyone to see and study. As they say, it’s there in black and white. Translated into many languages. Repeated for thousands of years. If you want a good life, follow the Torah.

Is there a drought? Are you afraid of global warming? Do you think the world is running out of water? The Torah promises that if you follow the chukim and mitzvos, “venosati gishmeichem b’itom,” you will have as much rain and water as you need.

Are you afraid of food shortages? Are you wondering what you can do to ensure that you have enough food for your family? Same answer. The Torah promises that if you follow the chukim and mitzvos, “vehisig lochem…va’achaltem lachmichem lesova,” you will have plenty to eat.

Do you want to be and feel safe? Do you want peace? Also the same answer. The Torah promises that if you follow the chukim and mitzvos, “vishavtem lovetach b’artzechem…venosati shalom ba’aretz ushechavtem v’ein macharid…v’cherev lo saavor b’artzechem,” you will live contently in your land, there will be peace in the land, and you will sleep with no fear.

Everything that is happening today is spelled out in this week’s parsha. The history of the Jewish people is all in Parshas Bechukosai. When we were good, life was good. And when the people sinned and strayed, then what the pesukim say will happen (26:14-44) happens.

And there is more.

Most everyone is familiar with the words of Rashi on the opening posuk of the parsha. His words are so often repeated in shmuessen and drashos that they have become marching orders to generations of bnei Torah of all ages. But it’s always good to review them.

How does the Toras Kohanim derive this lesson from the words “Im bechukosai teileichu,” which appear to indicate that Hashem wants us to follow His chukim? The posuk says nothing about studying Torah.

Apparently, this question was troubling Rashi, leading him to quote a different message from the Toras Kohanim: I would think that the words “Im bechukosai teileichu” refer to their literal meaning, namely observing the commandments known as chukim. But if that is the case, why does the Torah then repeat itself and say “v’es mitzvosai tishmeru,” referring once again to mitzvah observance?

Therefore, he writes those immortal words, that “Im bechukosai teileichu” doesn’t only mean that we will be blessed if we follow the chukim. Rather, they contain another message: “shetihiyu ameilim baTorah,” that you shall toil in Torah. Those who toil in Torah will be blessed.

When we study Torah, we are connecting with Hakadosh Boruch Hu. We study His word and it affects us, our neshamos, and our daily conduct. We become better people, more attached to our purpose in life, strengthening our very being.

The Rambam, in his introduction to the Yad Hachazokah, writes that the mitzvos were given to Moshe Rabbeinu at Har Sinai accompanied by their laws and explanations. He derives this from the posuk (Shemos 24:12) which states, “V’etna lochem es luchos ho’even, v’haTorah v’hamitzvah – And I gave you the Luchos, the Torah and the mitzvah.”

From the Rambam, we see that when the word “mitzvah” appears in the Torah, although it usually refers to the commandments, it can also refer to Torah Shebaal Peh, which explains for us how to perform those commandments.

The epitome of human achievement is to become bound with the Torah.

Klal Yisroel has always had special appreciation for ameilei Torah and views with special reverence those who study and excel in Torah.

Shetihiyu ameilim baTorah is the hymn of our yeshivos and kollelim, islands of intense limud haTorah to produce exalted people.

The person who sits at his shtender struggling to grasp a Tosafos, lost in a world inhabited by him and Hashem, is who we aim to emulate.

“Is the fact that he didn’t review one more time a reason to call someone asher lo avado?” wondered Bar Hei Hei.

“Yes,” Hillel answered, bringing the example of the donkey-drivers in the market, where a journey of ten parsa’os costs one zuz, but a trip of eleven parsa’os cost two zuzim.

The Baal HaTanya explains the answer. A standard trip for a wagon driver is ten parsa’os. That is the normal. Requesting that he go eleven parsa’os is asking him to go out of his comfort zone, to stretch himself, to go beyond what he’s used to.

Hence, he charges double to go eleven parsa’os, because it isn’t just one more parsah. It is an entirely different trip.

Therein lies the secret of ameilus baTorah. The ultimate mitzvah is performed through serving Hashem via that one extra time. When people push themselves way beyond their comfort level, reaching into themselves and finding the strength for another blatt of Gemara, another few minutes in the bais medrash, or one more chazarah, they enter that exalted realm.

Each one of us has that gift. It’s there for the taking. With some spirit and determination, we can earn those blessings.

Shetihiyu ameilim baTorah. A mortal can brush the heavens and merit the brachos of Heaven.

Yisroel v’Oraisa v’Kudsha Brich Hu chad hu. Hashem and the Torah and Am Yisroel are one. When you plug into Torah, you are plugging into Hashem. When you connect to Torah, you are connecting to Hashem. You are having a relationship with the Borei. What could be better?

Our ambition and drive must be to excel in Torah and avodah. We have to value excellence and appreciate it in others. We should demand the best for ourselves when it comes to spiritual matters and not easily compromise on what is really important in life. In other words, we should all seek to become ameilim baTorah.

Studying Torah helps us confront the temptations society offers and withstand the ever-present pressures and enticements.

The Torah promises that if we are ameilim baTorah, if we work according to the Torah and concentrate our main efforts on Torah study and observance, we will be blessed and successful in all we do.

The Torah is what gives us our identity and what defines us. As we stand in the Sefirah period, we commemorate that we were freed from Mitzrayim so that we could accept the Torah on Har Sinai.

We count towards Shavuos and receiving the Torah to demonstrate that we are striving and reaching upward. Each day of the count, we seek to improve ourselves so that we better appreciate the gift that is the Torah.

There is an unprecedented explosion of Torah study in our day. Increasing numbers of Jews of all walks of life study Gemara daily, whether as part of Daf Yomi or some other program. It is no longer rare to travel on a plane and see people with a Gemara on their tray table. All across the country and around the world, there are more people dedicating themselves to full-time Torah study in kollel.

We are not economists. We can’t rectify the worsening inflation. We are not farmers. We can’t procure fertilizer and grow more crops. We don’t own factories in which we could produce baby formula. We are not generals or foreign policy experts who can end the war in Ukraine and contain China. And even if we could, nobody would listen to us.

What we can do is study more Torah, with deeper concentration. We can increase our diligence in the observance of mitzvos. We can be more careful with what we read, what we watch, what we bring into our homes, and where we go.

We can learn Parshas Bechukosai this week slowly and carefully, studying every Rashi and Ramban and the classic Meshech Chochmah until we understand and take to heart every word. By doing so, we will be motivated and inspired to do what it takes to improve our own lives and bring brocha to ourselves, our families, those around us, those who dedicate their lives to the study of Torah, and all of Klal Yisroel.