The Worst Sin of All: Hypocrisy at the New York Times 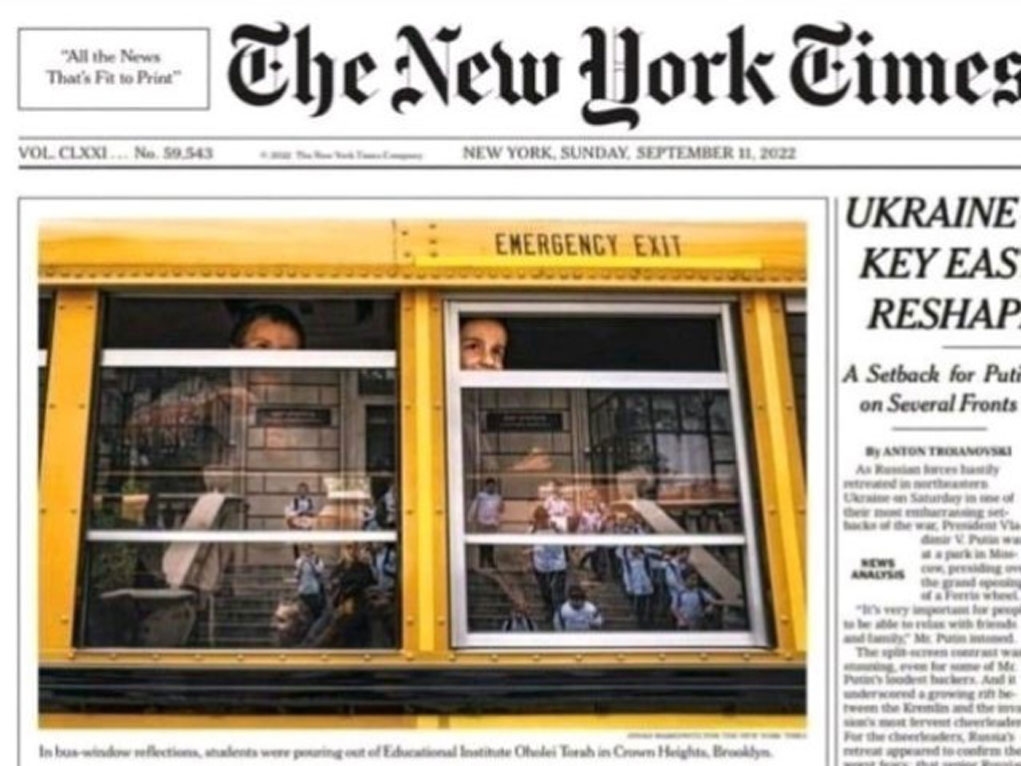 As this newspaper has often pointed out, including one of my own recent articles, the New York Times has recently turned into one of the most anti-Semitic and specifically anti-Orthodox Jewish organs in the media. As Avi Schick put it most succinctly, “The New York Times has long had a Jewish problem.” If its sins began with covering up and certainly downplaying the destruction of European Jewry, its recent attacks upon one ethnic minority, the people of Israel, have been more than egregious. However, a recent Times article which seemed more reasonable actually exposed a streak of hypocrisy that requires calling out and analysis.

The Sunday edition of last week’s New York Times (November 6, 2022) published an opinion piece entitled “The Meaning of Stanford’s Apology to Jews.” In it, Mark Oppenheimer correctly points out that Stanford University’s belated apology for decades of “purposefully limiting the enrollment of Jewish students” was too little and too late. It was merely the latest example of “the history of Jewish exclusion” from the elite and biased Ivy League schools that “perfected Jewish exclusion.”

All of this is, as we say, no chiddush. Even the condescending use of the Hebrew word teshuvah on the part of Stanford could perhaps be forgiven, to apply a painful pun. However, the phrase that caught my eye was, “That brings us to the report’s recommended step, which carries a heavy whiff of historical irony.” Actually, the true irony and far from a whiff is the Times’ complete tone-deafness and actual chutzpah in criticizing others without ever recognizing or acknowledging its own vicious history, which only gets worse with each day, week and issue of the paper.

Now that Binyomin Netanyahu appears set to become the prime minister of Israel once again, will the time come to dredge up the anti-Semitic cartoon it published of him in its international edition three years ago? Mirroring the worst of the Nazi rag Der Sturmer, its publication was condemned by Jewish and gentile decent people across the globe. Of course, the Times has never apologized or, to use its own term, done teshuvah for that heinous act. Furthermore, many objective studies over the past three quarters of a century have indicated that had the “paper of record” actually recorded the facts it clearly had available, countless Jewish lives could have been saved.

Indeed, as the Times writer concluded, improving the availability of kosher food at Stanford is far from the solution to a systemic anti-Semitic problem there and at all of the Ivy League institutions of higher learning. Nevertheless, reading these words on the pages of the New York Times without a mea culpa of its own does not only ring hollow, but is offensive and beneath contempt. We have all read of cultural heroes and apparently leaders who have recently endorsed anti-Semitic tropes and classical anti-Semitic beliefs about the Jewish people. It is worthless for major purveyors of the news to condemn these so-called “stars” without making even the most minimal effort to repudiate and take responsibility for their own sins of omission and commission.

What does the Torah have to say about this kind of mendacity and hypocrisy? A great deal. First of all, the Gemara (Yoma 72b) teaches that “a Torah scholar whose inside is not like his outside…is an abomination.” Translated into the modern vernacular, this clearly means that those who comment upon others, who make judgments – such as political leaders and the media – must be above suspicion and as morally perfect as humanly possible. The Maharal (Nesivos Olam 1:99-100) points out that this definition flows directly from the structure of the Aron Kodesh in the Mishkon which had to be golden inside and out.

This metaphor is borrowed by many of our baalei mussar to teach the primary trait of consistence. Rav Leib Chasman (Ohr Yahel, Teshuvah, page 188) quotes the posuk in Nitzavim (29:16) which states, “You saw their abominations and their detestable idols – of wood and stone that were with them.” He then cries out, “Woe and oy to us that we have been swayed by those who are not inside the same as they are outside, who bring us to ruin.”

Rav Yechezkel Levenstein (Ohr Yechezkel, Yirah and Mussar, page 16) issues sharp words to every one of us: “In the days of Rabbon Gamliel’s leadership, they did not allow anyone into the bais medrash who was hypocritical in any way. Each one of us should ask ourselves if we would have even been admitted through the door under those stringent conditions.”

Indeed, although Rav Yaakov Kamenetzky has pointed out (commentary on Pirkei Avos) that the halacha does not follow Rabbon Gamliel, nevertheless, Rav Chatzkel felt it worthwhile to remind us that at least there was such a standard. Human beings need ideals to which to strive. The current media has never even considered such ideals and therefore feels no need to aspire to anything but crass political correctness and mercenary pragmatism.

Interestingly, a number of commentaries ask: Who was this amazing gatekeeper in the time of the Tannaim who was able to discern a person’s inner thoughts? Was he a prophet or did he have ruach hakodesh?

The Imrei Emes (Likkutim, Brachos 28a) suggests that the power of Rabbon Gamliel’s edict that no hypocrites would be allowed in caused each potential student to engage in a self-reckoning and often decided that he was unworthy of entering until he improved himself. Halevai – would only – that our leaders and self-appointed critics would set such standards for themselves before presuming to judge others who are far better than them.

The Gemara (Sotah 22b) condemns those “who act like Zimri but want to receive accolades like Pinchos.” The Yad Rama (Sanhedrin 82b) explains that in order to be a kana’i – one who admonishes and punishes others – one must be above reproach. The Chazon Ish (Emunah Ubitachon, page 57) applies this to all those who claim to teach others: “One of the most well-known rules is that if one who is held up as a role model is deficient in his own personality traits…even if his teachings are accurate, since he acts hypocritically, his students will not listen to his words… Even worse, they will learn from his actions, not from his speeches.”

The Chazon Ish goes on to set the high standards for those in public life, education or leadership. “The relationship,” he asserts, “of a teacher to a student demands a lofty character…and the student will always emulate his master. Furthermore, whatever criticism the teacher has leveled will usually be faulty in any case, since it has come from a defective human being.” It is fascinating to note that when the Torah tells us that the brothers “hated Yosef,” their enmity flowed from the statement of Chazal (which they already knew) that “one of the three people who Hashem hates is one who “speaks one way with his mouth and another in his heart.” This misplaced judgment was considered so crucial to the Shivtei Kah that they used it to reject Yosef entirely, leading to many later tragedies in Klal Yisroel (see Rav Yosef Salant, Be’er Yosef, page 104).

The meforshim on the Chovas Halevavos (Pischei Lev to Shaar Habitachon, page 308) point out that one who preaches trust in Hashem but is deficient in this middah will eventually cause a great chillul Hashem, “something that should always be in front of speakers and teachers.” Powerful words for us all, but certainly for those who have spread hypocrisy for generations in their writings and proclamations.

To conclude, Rav Moshe of Chernobel (Haggodas Mateh Moshe) interprets the end of the parable of Chad Gadya as referring to those who are killed by the Malach Hamovess for their sin of hypocrisy. “This person thinks that he is a tzaddik, but he actually fools everyone,” he thunders. “He is punished for his iniquity, but in truth he had no soul at all, as the Arizal teaches.” Clearly, there is much for all of us to think about when hearing these mighty words. But let us first recognize the outright hypocrisy of the media in our midst and then endeavor to become paragons of virtue inside and out ourselves. This will surely bring us the opposite of these predictions for blatant hypocrisy and will bring happiness and joy to all who act and speak honestly in all that we do. The middah of middah tovah merubah will, G-d willing, shower us with many brachos for our honesty and integrity.

A Country in Turmoil You may find this hard to believe, but at the beginning of this week, the entire country was preoccupied by something