The Uses of Disappointment 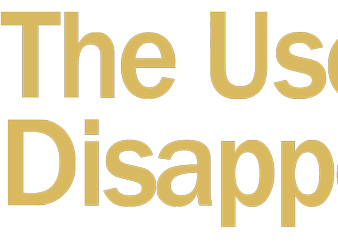 I hope we have not already forgotten our beloved Yom Tov of Sukkos. It was indeed a beautiful and uplifting time. In the sukkah, we were able to bask in the kedushah of the Shechinah and our holy guests, the Ushpizin. Outside, not so much. Please let me explain.

Like many rabbonim, I urged my listeners over Yom Tov to maintain and cherish the kedushah of the sukkah by opening the door to the holy Ushpizin, but not to the vileness of the outside world. Many of us pointed out that this year, our exhortations were focused upon a particularly vexing situation, a sordid and demeaning political atmosphere that had diminished us all. The inclination to bring these flotsam and jetsam into our own teivah, the sukkah (see Zohar, Pinchos 256a, and Rav Yeruchim Olshin’s Yoreiach Lamoadim, page 63) is simply the work of the Soton, who has been frustrated with our steady spiritual aliyah since Rosh Chodesh Elul.

I suggested to my kehillah that, above all, we should leave the current political duel out of our sukkos, because the words, rhetoric and images of this presidential contest, more than any in our lifetime, have sullied the atmosphere for Jew and gentile alike. Someone even shared with me a political cartoon of parents shielding the eyes and ears of their young children from the debates and so-called discourse being promulgated by the candidates and media, especially during these final few weeks.

I would, however, like to make a suggestion about what is actually happening before our eyes in the larger context of haskafah and Jewish history.

If we truly believe that hakol bishvil Yisroel (see Rashi, Bereishis 1:1; Avos D’Rebbi Nosson 41 with Peirush HaGra), then it should be manifest that all this is part of a divine plan. Although every player has his or her own free will, acting in accordance with their personal notions of self-interest, Hashem controls the actions of those in power (see Mishlei 21:1 with Ralbag and Malbim). What is happening and why now?

Let us learn together a major teaching of my rebbi, Rav Yitzchok Hutner zt”l, concerning patterns in world and Jewish history. As part of his trailblazing discourse, entitled “Holocaust: A Rosh Yeshiva’s Response” (originally printed in The Jewish Observer, October, 1977, translated by Rabbi Chaim Feuerman and myself), the rosh yeshiva identified a pattern in Jewish history he called “The Era of Disappointment” (reprinted in A Path Through the Ashes, ArtScroll, page 41). Rav Hutner pointed to several seminal events in the life of Klal Yisroel, when we learned the bitter truth that promises, laws and even the formal declarations of major powers were worthless and should not be counted upon. The purpose of these “disappointments” was to free Am Yisroel from falling into the “lure of the nations,” as he termed the Targumic translation of elohei neichar ha’aretz (Devorim 31:16) as taavas amemei arah.

Rav Hutner demonstrated in both hashkafic and historic detail that, at some point, after the danger from outright idolatry was no longer a potent threat, the new sakanah flowed from our becoming enamored by the power, culture, seeming graciousness and promises of the outside world. To alleviate and even cure that malady, Hashem arranged for promises to be broken, laws to be rescinded, and major declarations to be repealed, officially or by default.

Rav Hutner cited such examples as Lenin’s promise in 1917 of a kind of Jewish soviet, which would grant rights to the Jews, only to be savagely revoked by Stalin in the 1920s. At about the same time, Jews danced in the streets when Britain announced the Balfour Declaration, promising that “His Majesty’s Government views with favor the establishment in Palestine of a national home for the Jewish people.” By 1922, Winston Churchill was already backing away from this commitment, and with the issuance of the White Paper, little was left of British support for a Jewish state.

Just as dramatically, “on March 11, 1812, Prince Karl August von Hardenberg issued his edict emancipating Prussian Jews, but a mere century later, his definition of a Jew was used to help draft anti-Jewish legislation, culminating in the evil Nuremberg laws, which legalized anti-Jewish bigotry.”

The rosh yeshiva taught that disappointment in the gentiles, while painful, is one of the most important lessons Klal Yisroel must learn in its sojourn through golus. As always, each generation must apply the Torah teachings of its predecessors to its own time.

In our generation, perhaps an equally important lesson is our becoming disenchanted and even repulsed by the secular politicians and leadership. Whether the problem is a wholesale embrace of sheker combined with a reckless rejection of any semblance of emes or an apparent immoral or amoral attitude toward life, our innate Yiddishe neshamah has begun to recoil from the individuals and even the process itself. Just seven decades ago, rabbonim were warning about the avodah zarah surrounding the worship of F.D.R. in many Jewish circles. Even with the revelations of his perfidy in abandoning the Jews who were being systematically murdered in Europe, many Jews continued to blindly vote for his political party, having been morally corrupted by the gifts he ostensibly delivered to our people and others in the form of various social service programs.

Perhaps we can discover a source for the rosh yeshiva’s approach to this historical perspective in the Torah itself. It is well-known that the two great roshei yeshiva of Volozhin, the Bais Halevi (Vayikra 20:26) and the Netziv (introduction to Shir Hashirim), taught that anti-Semitism was created to stop Jewish assimilation amongst the gentiles. However, there is another phenomenon that has protected us from this perennial danger through the ages.

One of the strangest facts about our wanderings in exile and, surprisingly, even in Eretz Yisroel is that wherever we have lived, the gentiles have been the most depraved and immoral. The Torah testifies, “Do not perform the practice of the land of Egypt in which you dwelled and do not perform the practice of Canaan to which I bring you” (Vayikra 18:3). Rashi comments that “the actions of the Egyptians and the residents of Eretz Yisroel were the most evil of all the nations and the exact places where the Jews lived were the worst of all.” Why, indeed, did Hashem place us in the midst of such spiritual danger?

The great mashgiach of the pre-war Mir Yeshiva, Rav Yerucham Levovitz zt”l (Daas Torah, Vayishlach 33:4) turns the phenomenon upon its head and suggests that it was actually our arrival into these lands that triggered their sudden deterioration. He cites the age-old bitterness between Am Yisroel and the nations as stemming from Sinai (Shabbos 89a) and describes the essence of our enmity as that of fire and water, kedushah and tumah.

Although Rav Yerucham’s words ring so obviously true, there seems to be another conclusion to be drawn from his sharp observation. Perhaps Hashem allowed the prevailing culture in each land in which we were placed to sink so low that we would not be too tempted to emulate and become fully immersed in its more infernal elements. Of course, one by-product would always be that many gentiles would also find themselves disquieted if not totally appalled by the apparent “fall of Rome” type of rot that was afflicting their world. This tension and oscillation, often causing the pendulum to swing, is also part of Hashem’s Hashgacha of His world, but is not relevant to this discussion.

For us, as Jews, especially after the uplifting season behind us, we must certainly react negatively to the lowly words and deeds to which we have all been subjected. In fact, if we find that good people all over realize that they, their children and their families need cleansing (a comment widely heard in circles still seeking decency), we must apply a hearty kal vachomer to the holy neshamos we should be guarding from baleful influences.

May we soon say a hearty boruch shepetorani to a hazardous time, while understanding that Hashem may have had a hidden agenda for us all to follow. May we all have a gezunten vinter in gashmiyus and ruchniyus.