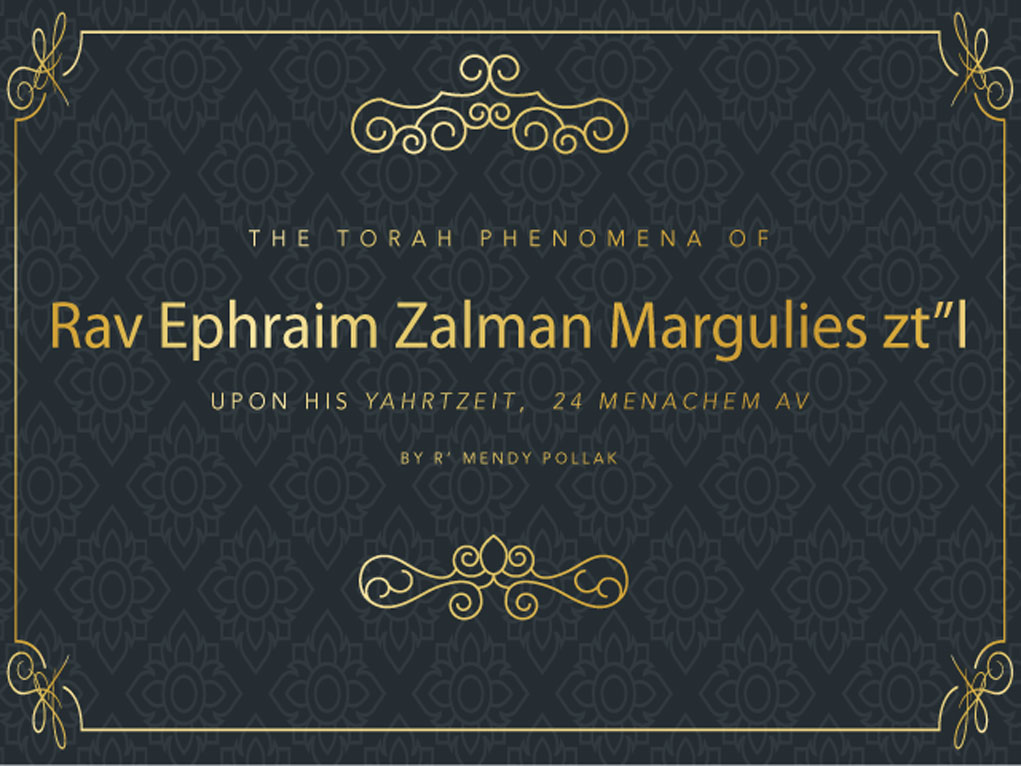 Rav Ephraim Zalman Margulies zt”l (5523/1762–5588/1828) was a tremendous talmid chochom whose reputation as a world-class scholar has been recognized by gedolei Yisroel until today. Though he was a major industrialist with offices in Brody and Vienna, he nevertheless spent most of his time learning with talmidim in the bais medrash. He wrote brilliant teshuvos to petitioners from far and wide on myriad topics.

Rav Ephraim Zalman was a son of Rav Menachem Manish, the rov of Donovitz. His rabbeim were his uncle, Rav Sender Margulies, the rov of Stanov, and Rav Yitzchok Hakohen, author of the sefer Bris Kehunas Olam. His brother, Rav Chaim Mordechai Margulies, was a renowned talmid chochom who authored the acclaimed Shaarei Teshuvah, found in all classic editions of the Shulchan Aruch.

Rav Ephraim Zalman was knowledgeable of all of Talmud Bavli, Yerushalmi and poskim. His authoritative seforim include Shu”t Bais Ephraim, Sheim Ephraim, Tiv Gittin, Mateh Ephraim, Shaarei Ephraim, Yad Ephraim and Olelos Ephraim. We present you with several of his phenomenal Torah thoughts to give you a glimpse of his gadlus baTorah.

Umal Hashem – Hashem will circumcise your heart alludes to teshuvah. V’ani le’odi alludes to tefillah, which is rinas dodim. The posuk in Esther, with reference to matanos la’evyonim, alludes to giving tzedakah. These remazim are to galvanize us to embrace these ideals of teshuvah, tefillah, and tzedakah prior to entering the Yemei Hadin.

The Gemara in Horiyos (12a) teaches that on Rosh Hashanah, we should see (eat) kara and ruvia, gourd and fenugreek, to indicate that our merits should increase. If we have not attained zechusim until now, how can eating these items help us attain zechusim?

Rav Ephraim Zalman (Drashos Ephraim) offers that our partaking of these simanim are meant for us to take to heart the seriousness of Rosh Hashanah, and to galvanize and extend ourselves during our tefillos, to do teshuvah with the utmost love for Hashem.

This is the purpose of pleading to Hashem: kasveinu b’sefer zechuyos, though we are lacking zechuyos. Consider, though, that we also plead for Hashem to be kasveinu b’sefer selicha umechilah. With our heartfelt pleas for forgiveness, we can merit that Hashem will turn our zidonos, willful sins, into zechuyos (Yoma 86b).

The thrust of having simanim is to motivate us to undertake whatever it takes to attain a teshuvah sheleimah. Surely, such a full-hearted teshuvah will turn all our sins into zechuyos.

On Sukkos night as well, why do we not eat separate pieces of challah, one for the seudas Yom Tov and one for the mitzvah of eating in a sukkah, to avoid chavilos chavilos?

Rav Ephraim Zalman (Mateh Ephraim 625) explains that there is a major difference between eating matzah on Pesach and eating challah in a sukkah. Regarding matzah, the mitzvah is to specifically eat matzah, as the Torah commands us (Shemos 12:18), “Ba’erev tochlu matzos.” Regarding sukkah, the main mitzvah is to live in a sukkah after making a brocha on the sukkah during Kiddush. The mitzvah of sukkah, besides eating therein, also entails sleeping, entertaining, and all daily routines. Therefore, eating a piece of challah as fulfillment of the brochA made during Kiddush does not make it chavilos chavilos. Since the brocha of leisheiv basukkah relates to living one’s life in a sukkah, it is therefore not related at all to the birkas hamotzie, which is solely on bread.

Rav Elazar ben Azaria says (Brochos 12b): “I am like a seventy-year-old man, yet I did not prevail to convince my colleagues to recite Yetzias Mitzrayim at night until Ben Zoma brought proof from kol yemei chayecha (Devorim 16:3).” Why does Rav Elazar focus so much on his age? What relevance does his feeling as if he is seventy years old have to the obligation of laining Shema at night?

Rav Ephraim Zalman (Shu”t Bais Ephraim, Yoreh Deah, introduction) offers an ingenious explanation. The reason the Bnei Yisroel merited to leave Mitzrayim earlier than they were supposed to was because the Egyptians enslaved the Jews even during the night. Consequently, it would be appropriate to require the laining of the Shema at night.

However, Chazal (Shemos Rabbah 15:4) say that the Bnei Yisroel left Mitzrayim early on account of our meritorious avos. Accordingly, the nighttime servitude was not instrumental in speeding up the geulah out of Mitzrayim.

Rav Ephraim Zalman continues: The turning of Rav Elazar ben Azaria’s beard into white was Hashem’s method of revealing that wisdom is not dependent on age, as there are plenty of elderly people who are not chachomim. Of course, a young talmid chochom may also not be sufficiently Torah proficient that we should heed his words. Therefore, Hashem turned Rav Elazar’s beard white to show that wisdom can come to a young person.

When Rav Elazar saw the whitening of his beard, he realized that just as Hashem brought the future (old age) upon him, certainly Hashem can bring the geulas Mitzrayim earlier than initially planned. Therefore, we do not have to say that the nights were instrumental in bringing the geulah upon us earlier. Just as Rav Elazar benefited from his personal zechus avos, likewise, the Bnei Yisroel benefited from zechus avos, on whose account the geulah out of Mitzrayim came earlier than scheduled.

However, Ben Zoma independently brought proof from pesukim that, indeed, even at nighttime we must mention Yetzias Mitzrayim, as the Mitzriyim enslaved us during the night hours, which caused the hastening of the geulah.

Why do Ashkenazim not perform Birkas Kohanim during the year other than on Yom Tov? It is a mitzvas aseh for the kohanim to bless the Bnei Yisroel. How did it come about that we forego this mitzvah throughout the year except for Yomim Tovim?

Rav Ephraim Zalman (Shu”t Bais Ephraim, Orach Chaim 6) notes that over five hundred years prior to his time, the Tashbetz wrote that Birkas Kohanim was no longer invoked during the year. Even the Bais Yosef, who writes that the communities of Eretz Yisroel and Mitzrayim where Birkas Kohanim is recited daily should be commended, nevertheless does not venture to reinstate Birkas Kohanim in communities throughout the world.

What is the source of the minhag not to say Birkas Kohanim daily?

Rav Ephraim Zalman cites the Rivash, who says that kohanim today do not possess shtar yichus, proof of their lineage. They are called first to the Torah based simply on chazakah. Since their status as kohanim is a safeik, we are reluctant to have them bless the Bnei Yisroel and possibly invoke Hashem’s name in vain through making a brocha levatalah. Even if the kohanim would bless the Bnei Yisroel without reciting a brocha, the Noda B’Yehudah rules that saying Yevorechicha Hashem itself would be a brocha levatalah.

Rav Ephraim Zalman points out three possible sins that would be transgressed if a kohein today would say Birkas Kohanim during the year. First, the Torah says “Ko sivorchu” to the kohanim, and if a safeik kohein says Birkas Kohanim, he transgresses the aseh that only kohanim may duchen, but not a zor, which he may be. Secondly, he has an obligation to endeavor to be blessed. When he stands up to bless the Bnei Yisroel, he is ignoring his own mitzvah to be blessed by the kohanim. Thirdly, he is possibly making a brocha levatalah.

If so, what is the heter to duchen on Yom Tov? Rav Ephraim Zalman brings the Gemara (Chulin 133a), where Abaya would accept matnos kehunah once a year, on Erev Yom Kipur, to convey that he was indeed a kohein.

Rav Ephraim Zalman lists the exiles we have gone through: France, Catolinia, Aragon, Spain, Portugal and Italy. We have been shaken m’kli el kli umigolah el golah. Since the chachmei hadoros saw how we have been mivulbul, they instituted that kohanim should no longer duchen daily. However, to assure that those who believe they are kohanim should not forget the obligations of the priesthood altogether, they duchen on Yom Tov.

When the farmer brings his bikkurim to the Bais Hamikdosh, he says the formula of “Arami oveid avi” (Devorim 26:5). We normally understand this as recounting how Lovon, the Arami, wanted to destroy Klal Yisroel.

Rav Ephraim Zalman (Shu”t Bais Ephraim, Yoreh Deah, introduction) reads these words differently: Lovon, the father of Rochel and Leah, might have been reckoned, had he merited, as one of the avos. However, “Arami oveid avi,” Lovon held on to the legacy of idolatry of Aram. This caused him to lose out on being reckoned as avi, as one of our avos. The farmer then concludes by saying: Lo avarti mimitzvosecha – I have not sinned. Unlike Lovon’s behavior, I want to grab onto mitzvos!