The Smell Of Kishke 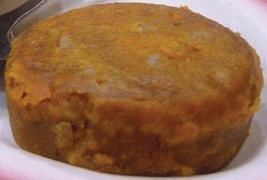 It was the kishke that did it. Often, the most seemingly mundane things can thrust a person into an emotional journey down memory lane, a journey full of nostalgia and longing. For me, it was the smell of kishke that triggered it. This past Shabbos, I had the zechus to visit my parents, may they be well. It was a bitterly cold Shabbos morning as we walked to the shul where I had grown up and where I had davened as a child and teenager.
Upon entering the shul, it hit me – an overpowering smell of kishke and kugel. It was a smell that aroused an overpowering sense of nostalgia. The warmest feelings and memories enveloped me. I had suddenly been transported back in time.
I was once again a young boy of 8 or 9 years old. It was the middle of the freezing Canadian winter. The temperatures were in the low teens and I was walking to shul, holding my father’s hand. My ears were beet red, my nose frozen. The sky was gray, almost overcast. Finally, after a 25-minute walk, we arrived in shul. In contrast to the gray outside, the shul was well lit and, even more than that, it was very warm, very inviting, with the most powerful smell of kishke tickling my nostrils. This wasn’t just any imitation, flour kishke. It was the real deal.

The warm, welcoming atmosphere, the way the people interacted, and the singing during davening just made one want to come to shul. Shul was an appealing place, where one felt a sense of belonging. It was a place one looked forward to going to and, indeed, my father did not have to pull me out of bed and force me to go to shul. It was so geshmak that I wanted to go.

It was that feeling of warmth and those memories that enveloped me as I entered the portals of the Agudas Yisroel of Toronto this past Shabbos.

Truthfully, it wasn’t only the shul. There is something interesting and fascinating about returning home to one’s parents and the same house in which one was raised. Without even realizing it, one suddenly reverts to the role of that little boy in the embrace, the warm, parental shelter in which one was raised. The fact that one might already be a father of older children makes no difference. Once a person is back in the same house, kitchen, dining room and bedroom, one is once again a little boy in the protective cocoon of Totty and Mommy, Daddy and Mommy, Abba and Ima.

Sitting in one’s seat at the Shabbos table, the exact place where one had sat as a boy, makes one feel again the role of the child who knows that no problem is too great for parents to solve.

I remembered running into the house panting as if my heart was about to burst. I was running away from the Italian neighborhood toughy who threatened to beat me up. When I crossed the threshold of my house, I knew I was safe. My parents would always be there to protect me.

This was the feeling that I constantly felt throughout Shabbos. That association, that feeling of again being with one’s parents in the same house, eating the delicious food with those old familiar tastes, cooked by my mother, and walking with my father to the same shul, was eye-opening and comforting. I was once again the little boy in the place where all problems could be solved.

The davening, too, was a trip down memory lane. The baal tefillah was one of the chazzanim I remember from my childhood. He was always a fantastic baal tefillah,but this Shabbos, he seemed to have gotten even better over the years. He sang a dizzying array of beautifully chosen niggunim. While he was singing with tremendous longing the words “Mosai timloch beTzion,” begging Hashem, “When will You reign in Tzion?” and as he concluded the upbeat words of “Ve’eineinu sirena – May our eyes see Your Kingdom and Your Kingship over the world,” davening with such intense longing for Hashem to come back home, that is when it hit me.

All of a sudden, right there, in the middle of the beautiful rendition of Mimkomcha, everything became clear.
What are we asking for in the tefillah of Mimkomcha? We are asking Hashem, “Please, Hashem, take us back home. Please, Hashem, we beg of You, we want to return to that wonderful cocoon. We want to be enveloped in Your pure, holy embrace. Hashem, You are our Father and Mother. In Your Presence we feel secure, we feel loved, we feel protected, and we feel sheltered. We once felt that way, and then we moved so far away. We were driven away.

“They may take the form of various Arab nations and even so-called friendly European nations. They may even take the form of technological ‘innovations’ that have been so successful in bringing us down.

“In the old days, when we were with You, Hashem, when we were able to bask in Your wonderful Presence, even when we sinned, we knew we could come back to You. We knew we could bring a korban. And even as You were upset with us and demanded more, we could still fall into Your loving embrace. We could come to Your house, Your wonderful Bais Hamikdosh, and everything would be better. All of our problems would be solved. You were the ultimate Totty and Mommy, Avinu Shebashomayim,Who loved us so much and accepted our admissions of guilt and our contriteness. You saw through the thick layer of sin that sometimes encrusted us and hid our princely qualities. You saw our innate goodness. After all, You created us. You, like a mother who watches her child grow and knows his sweetest side and his best side, know that the good side is the real ‘him.’

“Certainly, even now that we have been exiled so far from our parental home, when we have been dispersed to the four corners of the earth, You are still watching over us with love. You still see our innate goodness. You still deal with us benevolently, but, at times, it is so hard for us to tell. We feel Your closeness so much more when we are sitting at your table. ‘Woe is to the children who have been exiled from their Father’s table.’ Ve’eineinu sirenah. Please let us come home and see You once again in Your House. Going home to parents is just different. We want to come home! We long to return home!”

HASHIVEINU – BEFORE IT IS TOO LATE

As the chazzan concluded the words of Kedushah, the posuk of “Hashiveinu Hashem eilecha venoshuvah chadeish yomeinu kikedem – Bring us back to You, Hashem, and we shall return, renew our days as of old,” came to mind. Please, Hashem, bring us back home. Please, please, Hashem, the golus has been so long. Yes, it is a benevolent golus, it is a good golus, and we are treated well, but it is still not home. So many of us are falling away. We don’t know if they will ever come home. They are so far…but they are still Your children.

We want to go back to our youth. We want to return to the days of kedem.

Please, Hashem, hashiveinu. Bring us back. If You wait for us to come home on our own, we may get so lost that we will not be able to find our way home.

Please, let us once more come in from the freezing cold to enter Your house, bask in its warmth, and smell and eat that delicious kishke – “rei’ach nichoach, isheh laHashem.”

Please, Hashem, we beg You. We are so tired, we don’t even know how to ask properly anymore. We need our Parents to teach us manners. We can’t even do that on our own.

You, Hashem, know us since we were babies. Zocharti loch chessed ne’urayich. You will understand our hidden cry, even it if is not eloquent.