The Return of the Chofetz Chaim ztâ€l 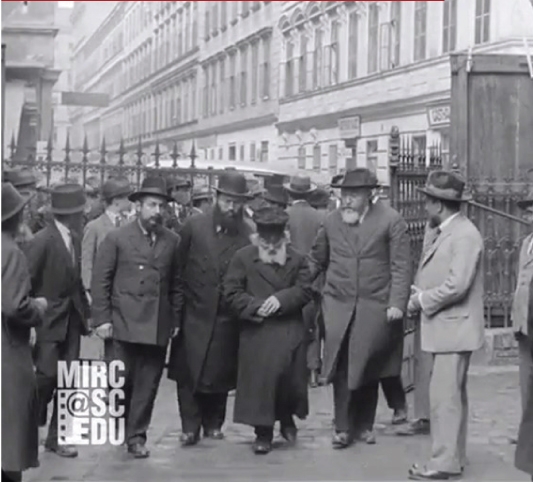 Why now? Why, indeed, did the 1923 video of the Chofetz Chaim and a number of other gedolim just turn up?

We have all heard the wonderful story of how the determined Yosef March and the staff at MIRC unearthed the treasured images from the first Knessiah Gedolah in Vienna. But why did it take almost a century for us to have the privilege of seeing the Chofetz Chaim actually walking?

I can only speak for myself, but for me it was a religious epiphany akin to watching techias hameisim. Unfortunately, neither the Chofetz Chaim nor Rav Elchonon Wasserman zt”l or the other gedolim in the short film have actually returned to us. But surely we have all experienced a taste – ze’eir anpin – of an event in our future, hopefully sooner than later. What, indeed, does it all mean?

I put the question to a major rosh yeshiva, who confessed that it had been bothering him as well. He suggested a brilliant answer. Yeshaya Hanovi (30:20) exhorts us, “Vehayu einecha ro’os es morecha – And your eyes will behold your teacher.” This is the posuk that was always quoted on the old “rebbi cards” we traded and cherished, implying that there was a mitzvah to collect “gedolim pictures.” The rosh yeshiva shared a mesorah that the Mishnah Berurah would be the accepted final posek until Acharis Hayomim. As we approach those momentous times, perhaps the Ribono Shel Olam is sending us a message that, indeed, our rebbi is very much with us, guiding us and still sharing his immense zechuyos with us.

Since the rosh yeshiva was kind enough to share this wonderful insight with me, I offered my own instant reaction to watching the diminutive octogenarian tzaddik walking rapidly into our hearts and minds once again. The Torah (Bereishis 39:11) tells us of the temptation Yosef Hatzaddik faced at the hands of the wife of Potifar. Rashi there quotes the Gemara (Sotah 36b) that “the image of his father appeared to him,” saving him from a potentially grave iniquity. Perhaps, we, too, needed the newly-discovered image of our revered rebbi, father and guide to daily life to help us avoid our own spiritual dangers. The rosh yeshiva endorsed my supposition, so I thought it would be useful to merge these two approaches into something from which we can grow and change in these times of heavenly signs.

We live in an amazing time, when technology allows us to learn from a faceless rebbi who whispers directly into our ear. This is far better than not learning at all and can certainly uplift “down time,” transforming it into Torah accomplishment. But our ancestors knew that there is no substitute for the rebbi’s shining face. The halachah (see Aruch Hashulchan, Yoreh Deah 246:23) clearly advocates that each student must be able to see the rebbi’s face, to the point that this rule dictates the seating arrangements in a classroom (Menoras Hamaor 5). In fact, poetically enough, the Ponim Yafos (Bamidbar 8:2) insists that “all teaching must be done face to face.” The Drashos HaRan (Drash 8) cites Shlomo Hamelech (Koheles 8:1) as the source for this halachah, since he teaches that “the wisdom of a man lights up his face.”

Indeed, the Seforno (Shemos 34:33) says that Moshe Rabbeinu did not wear his mask whenever he taught Torah so that the people would benefit from his radiance. He concludes that this can be clearly deduced from the famous words of the Gemara (Eruvin 13b) that “my sharpness comes from the fact that I saw my rebbi from the back. However, had I seen rebbi from the front, I would have been so much greater in Torah.” This stress upon the paramount importance of seeing the rebbi’s visage is codified in the Gemara’s statement (Yerushalmi, Kilayim 4) that “whenever repeating a Torah saying, one should imagine that the rebbi is standing directly opposite him.”

On a more global level, we should remind ourselves of the famous story of Shimon Hatzaddik’s pivotal encounter with Alexander the Great. The powerful young emperor and world conqueror revealed to his entourage that “demus deyukno shel zeh menatzachas lefonai – the image of this man heralds victory for me in my wars” (Yuma 69a). As has been pointed out by many meforshim, this seminal historic moment, featuring the kohein gadol in his bigdei kehunah vestments, symbolizes the eternal triumph of Klal Yisroel over its enemies. This reveals a new dimension in the importance of the “Jewish image.” Not only is the rebbi’s face crucial to the growth of his students, but demus deyukno of the true Jewish countenance is the source of our success and triumph.

We are now in a position to return to the idea that seeing the Chofetz Chaim moving and seeming so “alive” is a taste of techias hameisim. We are soon coming up to Pesach, when we will lain the haftorah of the techias hameisim of the dry bones during the time of Yechezkel Hanovi. The Tur (490) tells us that we lain this haftorah on Pesach because that is when techias hameisim will occur, im yirtzeh Hashem. Rav Eliyahu Eliezer Dessler zt”l (Michtav M’Eliyahu 3:76) teaches us that “Hashem is always performing techias hameisim, because the body and soul are inherently two contradictory entities, which can become detached at any moment if not for the fact that Hashem is constantly reuniting them with His infinite power.” He goes on to explain that in order for this to happen, “the tzaddik must recognize the work of Hashem in every single aspect of creation. Thus, not only is it ‘tzaddik be’emunaso yichyeh – the tzaddik lives by his faith,’ but ‘tzaddik be’emunaso yechayeh – the tzaddik brings life back through his faith.’” Techias hameisim clearly comes in many modes, at various times. One of them may be the renewal of our connection with a particular tzaddik or group of gedolim.

But we must dig yet deeper into why the gadol who would cause such a reinjection of the spirit of techias hameisim had to be the Chofetz Chaim. My rebbi, Rav Yitzchok Hutner zt”l, teaches (Pachad Yitzchok, Shavuos 41:9, and Igros, No. 87) that Rav Yisroel Meir Hakohein Kagan embodied the spirit of the bris on the Aseres Hadibros, because he, like the Luchos themselves, represented the dual aspects of the Torah, bein adam laMakom and bein adam lachaveiro. The Mishnah Berurah refocused Klal Yisroel on the mitzvos between man and G-d and the Sefer Chofetz Chaim reintroduced Klal Yisroel to the importance of being scrupulous about the laws between man and man. The Chofetz Chaim/Mishnah Berurah was therefore the ideal intermediary to remind us of the great potential of our time to bring about a rejuvenation of the spirit, but only if it includes both elements of the Torah, attaining a fresh devotion to mitzvos between ourselves and Hashem, while being equally scrupulous never to hurt our fellow man in any way as well. If reflecting upon the hadras ponim of the Chofetz Chaim helps us in this goal, his long journey back from Gan Eden will have been well worth the trip.