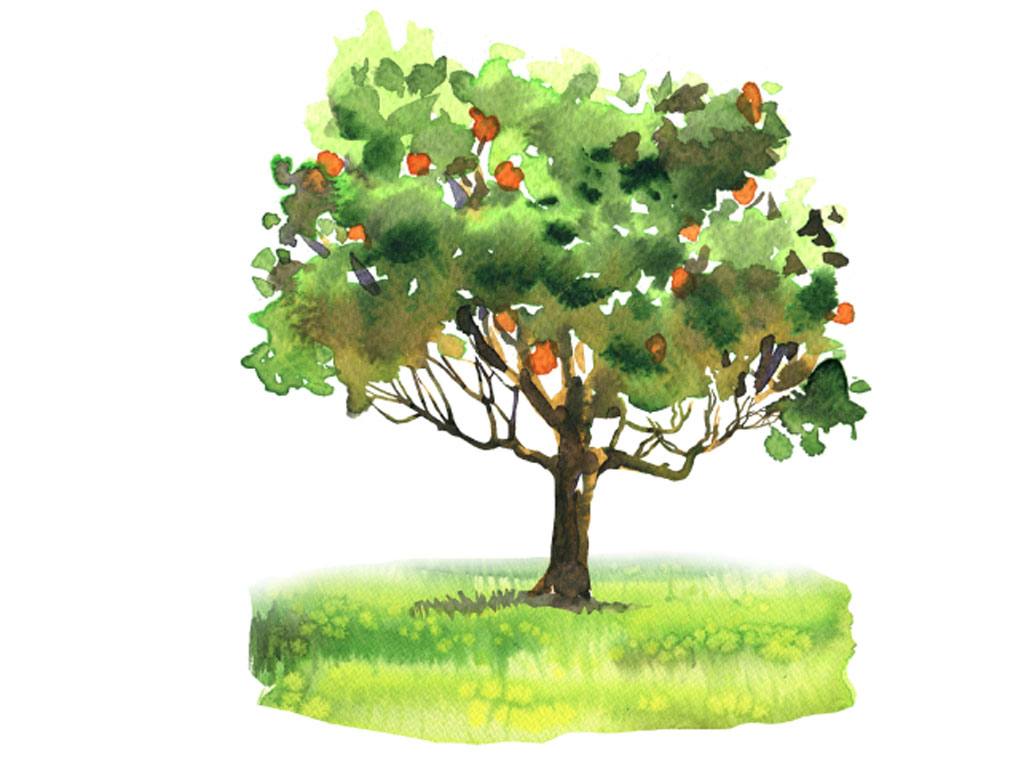 On Tu B’Shevat, we eat fruit and we talk of trees. We remember that we human beings are very much like a tree (Devorim 20:19) and are careful to make a borei pri ha’eitz with extra kavanah. But there are some trees among us that actually remind us of the ideal tree. This, in turn, inspires us to live like the trees which did not really come into being, but left a memento so that we would yearn for the world of perfection they represent. We will meet them very soon.

To begin this journey of discovery, let us return to the days of Creation. Hashem declared, “Let the earth sprout…fruit trees yielding fruit” (Bereishis 1:11). However, the earth produced something less than the Creator intended: “trees yielding fruit.” What exactly happened? Rashi reveals to us that the earth was supposed to bring forth fruit “where the taste of the tree would be like the taste of the tree. But she did not do so.” The perfection that could have been was lost, and Rashi concludes that “when man was cursed for his sin, the earth was remembered for her own transgression and punished.”

One of the questions most often raised about this cosmic event is: “How could the earth sin, ignoring the word of G-d, when it has no free will to be iniquitous?” Numerous meforshim, such as the Apter Rebbe (Oheiv Yisroel) and Ohr Gedalyahu, have analyzed this issue at length. Rav Gedaliah Schorr, rosh yeshiva of Yeshiva Torah Vodaas (Ohr Gedalyahu, Bereishis, page 14), answers that when Hashem uttered the word bereishis, everything in the universe was already created in potential. Then, with each of the other Nine Statements of Creation, all things came into being in reality. With the creation of the earth, man, who comes from the earth, was already dormant, replete with the unique power of free will. Therefore, it was possible for the inanimate earth to actually sin, utilizing the power of its future “outgrowth.”

But this does still not explain why the Mother Earth would want to deviate from the word of the Creator. The Chizkuni, as explained by Rav Aharon Leib Shteinman (Ayeles Hashachar, page 8) suggests that the earth thought that this change would be beneficial to the trees it was about to produce. It considered that if the tree tasted exactly like its fruit, human beings would destroy all the trees. Now, of course, as Rav Shteinman points out, it is clear that it is not up to any of Hashem’s creations to second-guess its Creator, Who obviously knows best. However, combining this with Rav Schorr’s explanation of how the earth could sin at all, we can understand that the earth, similar to mankind in later times, is prone to doubting, challenging and eventually even rejecting the Creator’s decisions and actions.

According to the Arizal (quoted by the Avnei Neizer on Bereishis, page 3), this explains Chava’s mistake in taking from the forbidden fruit. She thought that the prohibition applied only to taking from the tree itself, the fruit actually being permitted. As we will see later, this is especially logical according to the opinion that the fruit she took was from an esrog tree, whose fruit and bark are identical.

But what indeed did Hashem have in mind in the first place and what does it have to with us?

My rebbi, Rav Yitzchok Hutner zt”l (Pachad Yitzchok, Shavuos 22:2, page 148), gives an amazing answer. The fruit of a tree represents the final result – in his word the tachlis or purpose of the tree. But the tree itself represents the process or venue by which the fruit is brought to us. In an ideal world – which the earth did not seem capable or willing to cooperate – the tachlis and the process would be identical. The rule for one would apply to the other.

A personal interpolation: I do not know if this is what Rav Hutner meant, but it would seem that many functions of our world have lost out because of the earth’s sin. For instance, if the goal is tzedakah, the method for obtaining the money to contribute would have to be as perfect and pristine as the resulting mitzvah. All preliminaries would be as holy and pure as their ultimate goals. In fact, a number of seforim (see, for instance, the Netziv Shemos 13:15; Hakesav Vehakabbolah quoted by Gevuras Yitzchok, Bamidbar, siman 262; Meshech Chochmah, quoted in Chavatzeles Hasharon, Matos) indicate that this is reflected in Dovid Hamelech’s takanah (institution) to reward those who guard the weapons and utensils out of the war zone equally with those who go to war. I believe that Rav Hutner said that this, too, is part of Malchus Bais Dovid’s role in restoring the gap created by the earth. This would be done by equating the process (the guardians behind the scenes) with the final result (the warriors who fight and win the battles).

Let us now take a look at the remnants of these idyllic trees which can actually be found in our midst. We begin with the Jabuticaba, a tree found in many Latin American countries (Brazil, Argentina, Chile, Peru) where the fruit is found directly on the tree itself, without the intermediaries of branches. However, even more like the tree which seems to fulfill Hashem’s original plan is the edible bark of the cambium layer trees. Interestingly, the word Adirondack in the Iroquois language means “bark eaters.” These trees whose bark is edible are very popular amongst the survivalists, who favor learning how to survive in the forests and jungles in case of nuclear or other global catastrophes.

Our Tu B’Shevat goal should be much more spiritual, internalized and practical. Hashem has provided us all with individual tasks and purposes in life. Although some seem to be more glorious and conspicuous, Dovid Hamelech taught us that all are equal before Hashem. Each contribution brings kevod Shomayim and the geulah ever closer. Thus, both men and women, those who teach Torah and those who learn, those who contribute billions and those who sacrifice to give pennies, play a crucial role and are valued by Hashem.

Perhaps beyond the rare Jabuticaba and cambium layer edible bark trees, it is the lesson of the esrog, as we mentioned earlier, that we should think of on Tu B’Shevat. The Bnei Yissoschor teaches that the 15th of the Shevat is the time to daven for a beautiful esrog. Chazal (Sukkah 35) teach that it is the real fruit that is taam ha’eitz ketaam hapri – the taste of the tree is identical with that of its fruit. Perhaps one insight is that although only the lulav is mentioned in the brocha, the esrog is the fruit that represents complete perfection. That is the way to rectify the sin of the earth which flowed from man himself. This Monday is our opportunity and mandate to close the gap between the process and the goal. We must be careful to ensure that our ends are not used to justify forbidden means. When our goals and how we get there are in sync with each other, we will hopefully have gone a long way to help bring the return of Malchus Bais Dovid bimeheirah beyomeinu.