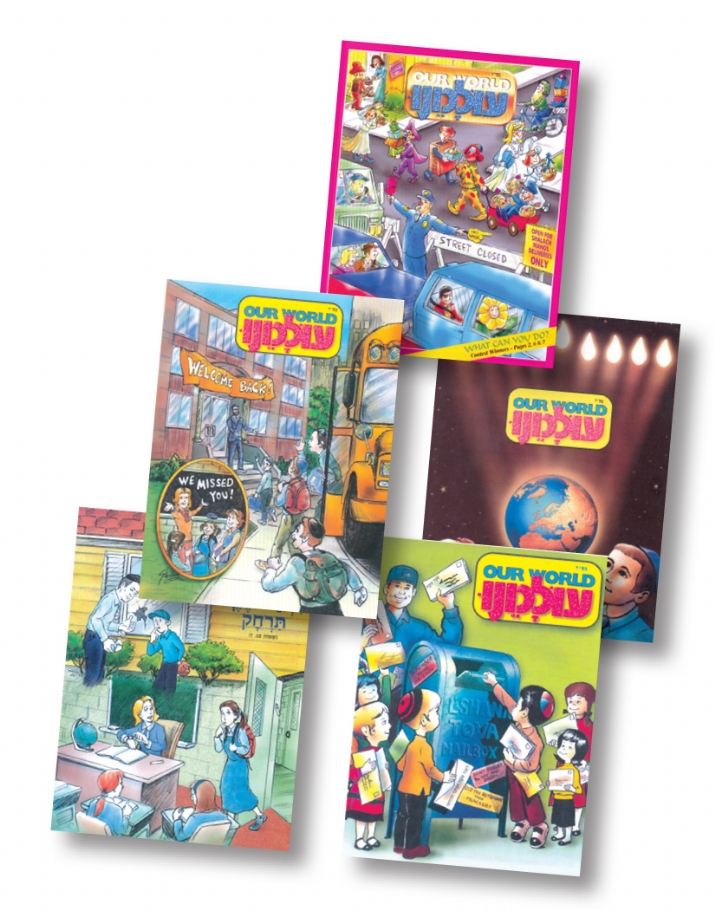 It is news like this that is met with mixed feelings. One is not sure whether to be deeply saddened or whether to be satisfied that a tafkid, a task, has been accomplished and it is time to move on to new goals, new challenges and new accomplishments. It was those ambivalent feelings that welled within the heart when my children brought home the final issue of Olomeinu last week, accompanied by a two-page letter from the editors and from Torah Umesorah, founders and publishers of the children's magazine for the past 67 years, explaining why they have to cease publication of the magazine enjoyed by some four generations of children. They rightfully put the best face on it with a large headline stating: â€œMission Accomplished.â€
In this week’s column, I would like to address what the closure of Olomeinu means on a personal level, and, be’ezras Hashem, in next week’s column, I will discuss what it may indicate to us as a tzibbur on a communal level.

I can never forget the feelings of anticipation when we would see our teacher entering with the ubiquitous cardboard box. We were thrilled. We knew we were about to get the next issue of Olomeinu.

Perhaps I am dating myself, but I distinctly remember the banner emblazoned across the top proclaiming, “Our 30th Year,” and I certainly read the previous volumes that my older siblings had gotten that said, “Our 25th Year.”

It is hard for the contemporary reader to understand what getting Olomeinu meant back then. There was virtually no frum publication for children (and basically nothing for adults either). We looked forward with such anticipation to the monthly arrival of Olomeinu. There was the green cover for Sukkos, the purple cover for Purim, and so on. Most of all, however, Olomeinu was a combination of wholesome entertainment and great chinuch rolled into one.

As a child growing up in an out-of-town community and attending a day school, Olomeniu, as its name implied, was my window into the wider Jewish world. Who can forget Olomeinu’s People, Places and Things column that ran for years and probably decades? It was that column that brought us in contact with varied interesting and inspiring developments in the Jewish world. Whether it was in Eretz Yisroel, New York or Omaha, Nebraska, there was always something interesting that gave us an enhanced appreciation and greater understanding of the Jewish world beyond the confines of our community. It made us realize that we were part of something bigger.

It was from the pages of Olomeinu that we learned how tefillin were made and what was in them. It was in the pages of Olomeinu that we learned of fascinating Medrashim that we would otherwise never have known. Yes, I know today’s kids are far more sophisticated than we were back then. Try telling them a story, a Medrash, or an anecdote about a godol, and, invariably, some of them have heard it already. That is the price of spiritual affluence and a more commercialized form of Yiddishkeit, but for us back then, everything was new and Olomeinu was a primary source.

I can never forget some of my most pleasant childhood memories of waking up early Shabbos morning, when the entire family was still sleeping, going downstairs to the kitchen with a whole stack of Olomeinus, and reading them for more than an hour until the rest of the family started to rise. The house was quiet and I would read and reread issue after issue.

After the comic, it was still dead quiet in the house,

And I would continue by reading Mendel the Mouse.

Mendel was always second to none!

But even then, I still wasn’t done!

From there I continued on to People, Places and Things, followed by the main tale, Rabbi Brailofsky’s and Rabbi Gevirtz’s stories, and on and on. I read and reread every volume. In my parents’ house, we had Olomeinus starting in the 1960s and going through the 1990s.

So much has changed since then, so much good has transpired, and we have come so far as a community, but there was a certain innocence back then, a wonderment about what being frum and being a Yid was all about. It was new, it was fresh and it was unique.

We know you can’t turn back the clock, but still, how am I going to explain to my kids what a pen pal was and what that relationship meant?

Another thing about Olomeinu was the fact that it went everywhere. Every school throughout North America, England, Australia and so many other places received Olomeinu. Somehow, the editors were able to accomplish the task of producing material that would appeal to kids from the most diverse backgrounds. Whether a child went to school at the Lakewood Cheder or in day school out in Tennessee, whether the child was a boy or a girl, somehow, everyone found something in Olomeinu. It is a tribute to the amazing founders and its subsequent editors, who were both deeply dedicated and talented pedagogues as well as good writers.

Yes, I know that Olomeinu wasn’t as exciting or as glossy as some of the stuff out there today. But neither were we.

We didn’t need it. We didn’t know it was missing. We were more than happy to get a publication that both imbued us with Yiddishkeit and entertained us at the same time.

I am not sure that formula, in that order, works today anymore.

So the feelings about the closing of Olomeinu?

More on this, be’ezras Hashem, next week.