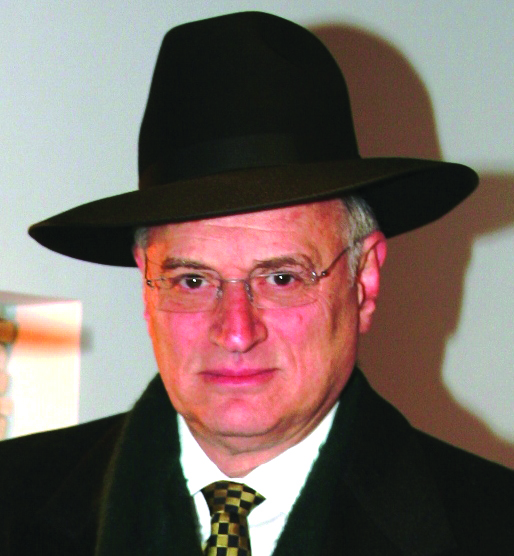 When I ponder the quintessential shtadlan who manages to straddle all fences, both within the Jewish world and in the general, non-Jewish world, I can't help but think of the amazing work of Mr. Malcolm Hoenlein. No, this article is not about Malcolm, although he deserves accolades from our community and indeed from all Jews. I am just reminded of something I once heard him say at a speech to a chareidi audience. I no longer remember his exact wording, but the message was: We are a very vulnerable nation. There are so many forces out there from within and without seeking to harm us and seeking to destroy us. We cannot afford to let others fight for us. As observant Jews, Mr. Hoenlein explained, we are the segment of the Jewish population that is growing in influence and power. When it comes to defending Jewish interests and the welfare and safety of acheinu Bnei Yisroel in Eretz Yisroel, we must make our voices heard. We must join in defending the barrage of attacks against the delegitimization of Israel, because it is ultimately those attacks that will serve as an excuse and license to maim and kill innocent Jews in Eretz Yisroel and put the existence of the State of Israel itself - and the Jews who live there - in jeopardy. Indeed, Mr. Hoenlein is correct. When terrorists or states go to war with Israel, they do not differentiate between victims and whether one is pro-Zionist or anti-Zionist. All that matters is that you are Jewish.

Mr. Hoenlein’s call to action especially resonated with me. As a person who follows the news for a living, I have seen how, over the past few years, anti-Israel campaigns have become extremely sophisticated – and not so sophisticated – ways of legitimatizing anti-Semitism. They hide and obfuscate their virulent hatred for Jews in the guise of being anti-Israel. In virtually all cases, with a few exceptions, the anti-Israel campaigns are really operations to hate and kill Jews.

This past weekend was a case in point. At a rally of the Muslim Brotherhood in Cairo, Egypt, the refrain amongst the crowd was, “Kill all the Jews.” Imams got up and did not suffice with venting their wrath at Israel, but rather at all Jews, everywhere.

In Europe and to a lesser extent in America, especially among the far left, they disguise their anti-Semitic intent a bit more, but the hatred is usually too acute and overt to contain and it slips out.

That is why I was very disappointed to hear the reaction of some frum Jews to a recent campaign against the delegitimization of Israel spearheaded by an Orthodox rabbi in England.

First, a little background. Rabbi Jonathan Guttentag is rov of the Whitefield Hebrew Congregation in Manchester. A talmid chochom and a former talmid of the Gateshead Yeshiva and Yeshivas Itri in Eretz Yisroel, he has several sons who are distinguished yungeleit in the kollel of Yeshivas Mir-Yerushalayim. In his years as rov of the Whitefield Shul, he greatly increased the observance of the community and established a kiruv kollel amongst numerous other programs.

THE POTENTIAL RESULT OF DELEGITIMIZATION OF ISRAEL: GENOCIDE?

As a rov involved in numerous public issues, Rabbi Guttentag came to realize that the hub of the delegitimization campaign against Israel was in London, England. While the center of the proverbial wheel is in London, its spokes extend to European capitals, the United States, South Africa and other places.

Our readers may not be aware of this, but the central concept behind the delegitimization of Israel campaign is to eventually render Israel so isolated that attacks against its civilians will be met with understanding as a legitimate form of defense. They want to render Israel so helpless and isolated that when there will be an attack on Israel, Israel will be left alone, with no international assistance. If successful – and the campaign is becoming increasingly successful – this idea would render the Jews living in Eretz Yisroel vulnerable to serious attack and even genocide.

Cognizant of this fact, Rabbi Guttentag boldly and courageously arranged an event held this past Sunday titled “The Big Tent for Israel.” The event was an effort to highlight the diabolical, systematic nature of the delegitimization campaign and take steps to combat it on multiple levels.

He succeeded in bringing together a very diverse coalition of Jewish groups in a show of solidarity and determined to devise strategies to neutralize the delegitimization campaign to ensure that Jewish lives will be saved.

“I WOULD WORK WITH THE POPE IF IT WOULD SAVE EVEN THE FINGERNAIL OF ONE JEWISH CHILD. …”

One of the most troubling, sad byproducts of the campaign was seeing how Rabbi Guttentag was criticized by elements in the chareidi community of England.

It is sad that our fellow Yidden, regardless of their view on the State of Israel, could not overcome their instinctive, kneejerk reaction and realize that this campaign was not praising the conduct of the secular State of Israel and its leaders per se, but actually preserving Jewish life in Eretz Yisroel.

Rabbi Guttentag was bombarded by phone calls, e-mails and text messages, primarily from “kanno’im,” but also from those with whom the message of kanno’us against anything related to the State of Israel resonated. They called him all kinds of names and asked him how he could team up with the devil.

They certainly forgot that if Israel is under attack, the Arabs will not differentiate between Meah Shearim, Tel Aviv, Bnei Brak or Haifa.

In reply to one of those attacks, Rabbi Guttentag asked, “So now, we need to ask the question: If delegitimization of Israel can lead to the downfall of the State of Israel, what will come in its place? I have four married children in Yerushalayim learning in the Mir Yeshiva… I wish to ensure that they are safely protected from the well-known terrorist threats that surround them…”

I can’t help but be reminded of what Rav Aharon Kotler said when he was accused of using every means at his disposal, legal or otherwise, and teaming up with secular Jews, to save the beleaguered Jews of Europe. He said, “I would work with the Pope if it would save even the fingernail of one Jewish child.”

DROPPING PAST SUCCESSFUL BATTLES TO SAVE JEWISH LIVES

There are times when it is to the detriment of the present and the future to wallow in the past, especially when it comes to pikuach nefesh.

No, we can never forget the evil of the Zionists and we must always be vigilant against the anti-religious and the Torah bias and hatred that so many elements of the present State of Israel possess.

In addition, we know as well as anyone the evil of the early Zionists in Eretz Yisroel. We know the evil campaign of shmad on the Yaldei Teiman and the Yaldei Teheran. The rishus is indescribable. We also know that the present leadership does not include people whom we would nominate for the 36 hidden tzaddikim…

Indeed, I am glad to inform the kanno’im that they won! They won the battle of the last century. They prevailed. There is no chareidi Yid, Rabbi Guttentag included, who romanticizes the State of Israel and its leadership as there was 50 years ago. We all know the state’s failings, which are too many to count.

That being said, knowledge of their failings shouldn’t relegate all of the Jews living there to be chayav misah! Rov minyan and binyan of Klal Yisroel and rov minyan and binyan of the Torah centers are there. If we don’t combat that delegitimization, the entire state will be in jeopardy. If the state falls, it won’t be the British coming back or the Americans taking over. It will be an Islamist regime, r”l. It’s as simple as that.

LEGITIMIZING THE JEWS, NOT THE SECULAR STATE

As we progress further into the second decade of the 21st century and we see enemies of our people wishing for nothing more than to perpetrate genocide against the Jews living in Eretz Yisroel, we would be wise to heed Malcolm Hoenlein’s warning and follow in the footsteps of people like Rabbi Guttentag. We, as a community, cannot be led astray by those who falsely uphold the banner of kanno’us . Certainly, we should not sympathize with kanno’us that empowers the most implacable enemies of our people who wish to murder us.

This is not the time for misplaced kanno’us.