The Coin of Chevron 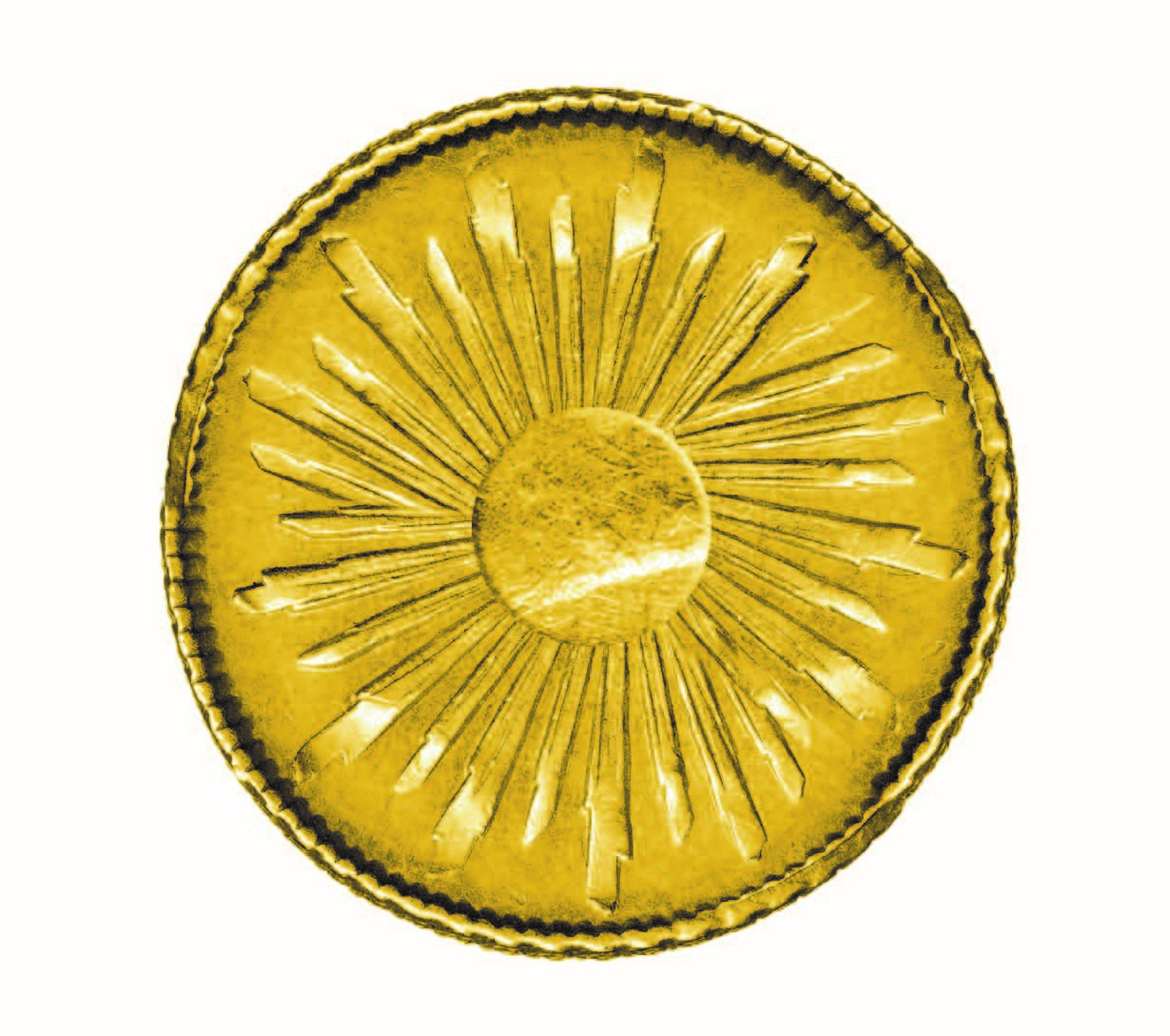 This week, we learn of the zenith that man reached when the Bnei Yisroel were given the Torah at Har Sinai. The moments at Sinai were the culmination of the world’s creation, as Chazal derive from the word bereishis, with which the Torah begins. They say, “Bereishis, bishvil Yisroel shenikreu reishis, bishvil haTorah shenikrais reishis.”

The Gemara (Avodah Zorah 9a) states that from the time of the world’s creation, there were 2,000 years of emptiness before the Torah was removed from its place On High and given to the Bnei Yisroel at Sinai. The Gemara (Shabbos 88a) teaches that Hakadosh Boruch Hu made a condition with the creatures of creation that if the Jewish people would accept the Torah, He would permit the world to remain in existence, but if they would refuse the Torah, Hashem would destroy the world.

I always knew that, but this week I learned a new twist to this concept.

One of the many gifts that Hashem has given me is that I have developed a closeness over the years with Rav Dovid Cohen, rosh yeshiva of Yeshivas Chevron in Yerushalayim.

Every time I am in Eretz Yisroel, I visit him and merit that we discuss matters of Torah and hashkofah. This week he is visiting the United States, delivering shmuessen and shiurim in various yeshivos in the New York area and a major address at the Dirshu Siyum Hashas Sunday night.

We were speaking on Sunday morning, and he told me that he wants people to know that while the other reasons he came to the United States are important, to him the most important component of his visit is to help Yeshivas Chevron.

In the United States, everyone knows of the large role of the yeshivos of Mir and Brisk, also Ponovezh, but few know and appreciate the large role that Chevron plays in teaching and spreading Torah.

The rosh yeshiva recounted that Rav Nochum Partzovitz, rosh yeshiva of Yeshivas Mir, would say that the mesirus haTorah at Har Sinai continues today in the yeshivos. Rav Dovid said that every day, when he enters the great bais medrash of Yeshivas Chevron, “I see 1,500 bochurim happily engaged in the study of Torah. I hear the kol Torah. I feel the joy and I see the realization of what Rav Nochum said. I see the mesirus haTorah at Har Sinai continuing in the Chevroner bais medrash.

“The Chevron Yeshiva is like no other,” he explained. “Chevron is the only yeshiva that carries the direct uninterrupted mesorah from its founding in Slabodka by the Alter 139 years ago through today.”

Where Will They See It?

Listen to Rav Eliyohu Eliezer Dessler mourn the churban of the yeshivos during World War II (Michtov M’Eliyohu, Volume 1, page 70): “My dear children, give me your hearts and listen well to what I say. Our generation is different than others, for it is one of destruction. No, we cannot appreciate or comprehend the wealth that we had that was destroyed and is gone.

“The memories are still fresh, but they fade with time, and presently we have nothing. We are empty.

“The spiritual wealth, the air of the yeshivos, the ambition for greatness and truth, the lomdus, the yiras Shomayim, the loving connection each one felt for the other, these are all gone and not with us anymore… The Shechinah has departed from amongst us; our children will not see it in us. And if we will tell them of what was, of what we saw and what we lived, to them it will be only a story and not reality.

“We saw the Shechinah in the hearts of the holy people, but where will they see it?”

The yeshivos were the lifeblood of our people, the home of the Shechinah, of the holy Torah scholars, of those who spread and taught Torah and mussar, and then it was all destroyed and went up in smoke. That impacted all the yeshivos, except Slabodka, which was transplanted to Chevron and from there to Yerushalayim. From there, the kedusha never departed, the holy ones never left the bais medrash, the Shechinah remained there, and the mesirus haTorah of Sinai took place there uninterrupted from 1881 until this very day.

What is so special about Chevron?

Listen as Rav Yitzchok Hutner depicts the experience of a bochur in Chevron, (Pachad Yitzchok, Michtovim, 166):

“At the inception of the yeshiva in Chevron, two main characteristics formed its existence: the freshness and vivaciousness of the heart and the stretching of muscles in the pursuit of Torah and yirah. These two characteristics merged into one flow.

“It is hard to say which attribute is the father and which is the child. Is it joy brought on by being engaged in the holy work or are the holy efforts enabled by being in a state of joy? In truth it was both, simcha brought on by avodah and avodah brought on by simcha, with the crown of the nobility of talmidei chachomim glittering upon them.

“Added to that is the spirit of Eretz Yisroel, which brings forth extra blessings upon the efforts of the students, allowing each one to attain, according to his own abilities, to unanticipated levels.

“Everyone in Chevron knew that the days spent here developed his personality, and that created the idyllic spirit that hovered in the air and created the atmosphere in this factory which creates great men. This is how the simcha and intense avodah were raised to the level of creating a great person.

“And this brings us to the second side of the coin: the appearance of the freshness of youthful energy, combined with intelligence and talent, internal pressure to grow, and the song of exalted youth, when they are totally dedicated to Torah, creates a live portrait of the supreme greatness of Torah.

“This precious individual – the student of Chevron – sharpens hearts and impresses other hearts. These hearts combine and gather around a great circle of dedicated friends who clutch the corners of the mizbei’ach, so they can be warmed by the flames that burn on the holy altar.

“Even those who were distant would direct their hearts and bring upon themselves the light that shone from Chevron.

“It was impossible for anyone who encountered this reality to refrain from taking a step towards greatness. Even for those who only merited a fleeting brush with this live performance of Torah majesty, it was impossible for them to continue on without being inspired by the honor and glory of Torah…”

That greatness continues until this very day within the halls of Yeshivas Chevron. The greatness and majesty of Torah are evident there. The sounds of sweetness and joy rise to a crescendo as bochurim,energized by their inner drive to rise and excel, engage themselves and each other in the pursuit of growth in Torah.

The great rosh yeshiva sits among them, providing guidance and direction, demonstrating through his actions and knowledge the superior heights to which man can reach if he dedicates himself to clinging to Torah.

The rosh yeshiva says, “The mesirus haTorah of Har Sinai is real in Chevron. I feel it every day. I welcome everyone to come visit our yeshiva. Come see 1,500 future leaders of Klal Yisroel as they fight to grasp every word of Hashem’s Torah.”

Slabodka is famed for the gadlus ha’adam that the Alter excelled in bringing out in his talmidim. Every talmid was treated differently and nurtured according to his individual talents and nature, guided to realize his fullest potential for greatness. Slabodka also stood for romemus, exalted loftiness, brought on by dedication to Torah, to chaveirim, to mussar, and to kiyum hamitzvos.

The students of the legendary master stood out not only in their greatness in Torah and kiyum hamitzvos, but also in the way they carried themselves, the way they spoke to other people, and the way they performed mitzvos and maasim tovim. They carried themselves with pride, they acted with dignity, and they lived with an inner joy and satisfaction on high levels of dedication to Hashem and his Torah. With every step taken and every word uttered, they were mekadeish sheim Shomayim and added to the world’s kedusha.

Who are we? What do we stand for? What defines us? Most of us don’t usually think of such heady questions, but if we are serious about our Yiddishkeit and why we are in this world, we do have to be able to readily answer them. Talmidim of Slabodka and the other yeshivos were always able to do so. They knew why they were here and lived their lives in that spirit. It is incumbent upon us to work upon ourselves to reach that level and comport ourselves as people who understand our role, obligation and mission.

And while we are discussing our obligations and our missions, it is a good time to remember that we must never compromise. Torah must remain supreme and its support uncorrupted by expedience. There is enough money in our world to support all the Torah institutions without compromising on principles and halacha. We must remain ever-vigilant and cognizant of our actions and their repercussions.

After my conversation with Rav Dovid Cohen, I left to participate in the cheder feerin of my grandson, who had just recently had his upsherin. It was heartwarming to watch how Rav Chaim Dovid Birnhak, the primary rebbi at Yeshiva K’tana of Lakewood, masterfully welcomed little Eli into the world of Torah.

I was overcome by the love and dedication he displayed as he went through each one of the Alef-Bais letters with the little boy he had never met. He lovingly held the “chosson” on his lap as he spoke of the sweetness of Torah and placed honey on the letters alef, mem and sof. While keeping the attention of the class, he made learning so geshmak for the future talmid chochom that he was ready to leave his morah and go to learn in the rebbi’s class every day.

The mesirus haTorah of Har Sinai that is alive in the bais medrash of Yeshivas Chevron is also tangible in the primary classroom of Yeshiva K’tana of Lakewood and in every bais medrash and classroom where rabbeim and talmidim dedicate themselves to knowing why they were created and what their mission is.

That same mesirus and kabbolas haTorah are present in the hearts of good Yidden who follow their mesorah and expend their efforts to grow in Torah and kiyum hamitzvos. Let us dedicate ourselves to be among those who feel a renewed transmission of and commitment to Torah every day.