The Beauty of Bayswater 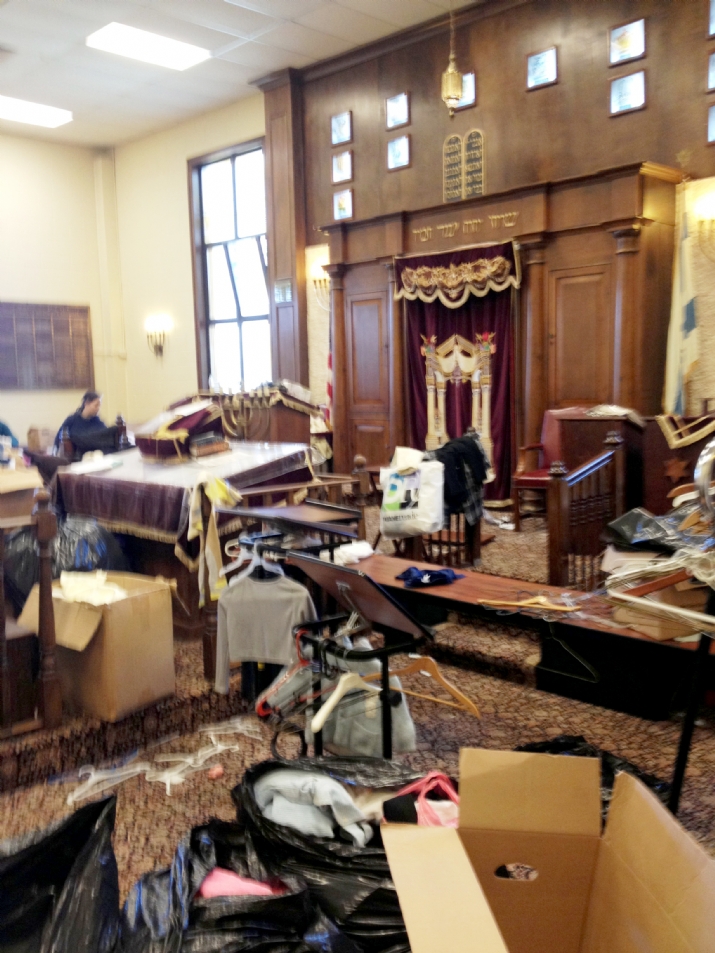 On Sunday, November 11, I came from Baltimore to the Bayswater/Far Rockaway community, an area ravaged by Hurricane Sandy. Of all my senses, it was the sense of smell that was the first to notice signs of devastation, as the putrid stench overwhelmed me while driving along Beach Channel Drive. Then, as my eyes caught sight of the unfathomable destruction, as well as the sea of garbage piled high next to the ocean, I could not help but wonder how these people had endured for the last two weeks without their most basic necessities. We take life for granted. We assume that we can create light with the flick of a switch, that we can receive a rush of water by turning a faucet, and that our warm, cozy houses will always be there for us.
And when those basic necessities are taken from us, we are left with nothing. Nothing but each other. Though the people in the Bayswater/Far Rockaway area suffered unimaginable damage, they were also privy to many hard-to-imagine acts of kindness – from all different ends of the Torah spectrum.

At the center of it all was the Young Israel of Bayswater, with their indefatigable rabbi, Rabbi Eliezer Feuer. Supported by an army of selfless men and women, the community rose from the depths of despair to the pinnacle of triumph. I was greeted by smiles and smiles and more smiles. But there was no time for talking, as there was much work to be done.

Sure, they had lost much. Some had lost everything. But they had each other.

In the story of Chanukah, we learn about the struggle of one small group of men, who illuminated the darkest black of night. We commemorate that miracle by lighting a small candle and placing it in our window for all to see. The story of the aftermath of Hurricane Sandy is like a modern-day version of Chanukah. Over the past two weeks, we learned the power of the Jewish spark and its indomitable spirit – how one light was able to flicker and ignite the flame of compassion that lasted and lasted and lasted. Although threatened by hopelessness and despair, the glow of kindness warmed the hearts of those who were now homeless, despondent, and lonely.

Volunteers converged on the shul on Healy Avenue. From Williamsburg to Teaneck, there was the unification of all parties. Satmar, Skver and Lubavitch put aside all ideological differences. Chassidic, yeshivish and Modern Orthodox Jews crossed the lines of demarcation to write one of the greatest chapters of chessed in recent memory. A command center was sent from Williamsburg, and three of the Skverer Rebbe’s generators were delivered by his Chassidim.

Dedicated volunteers left their jobs for two weeks, since they could not bring themselves to go to work when they knew how much their brothers were suffering. Men and women spent every spare moment ensuring that their neighbors and friends and strangers would have a place to sleep. Separate crews were sent to drain the water, to remove the debris, and then to obliterate anything that was left. A group of 75 volunteers has been taking turns patrolling the area to make sure that it is safe from looters.

In one room of the shul sits a woman who takes care of insurance claims. In the next room, stands a policeman who watches and marvels at this army of Jews who have gathered to overcome the forces of darkness. In yet another room, we find crayons, games and toys for the children to come and play – and remember that they can still be children even when everything else in their life has changed.

A young, irreligious girl traveled from Stamford, Connecticut, with a bag of coins and dollar bills. She had woken up early that morning and cried to her mother that they must do something to help. Late Friday afternoon, a woman from Teaneck placed an ad on a local Jewish website asking for donations. When someone called to offer to deliver the goods to Bayswater, she declined, saying she wasn’t sure if she would receive any contributions. By Motzoei Shabbos, however, her garage was filled with numerous donations of food and clothing.

When the National Guard finally came, among them was a Jewish religious soldier, whose name was Omar. He came to help his brothers as they delivered thousands of meals. In the kitchen, there was a team of women with smiling faces and open hearts who had come to feed their children. But it was not only their own children they were feeding. It was all of the children and families of the area. In fact, there were non-Jews, as well, who came to seek comfort and shelter under the umbrella of the shul. And they were fed a dose of good, old-fashioned Jewish kindness.

Do not make the mistake of thinking that it has been all peaches and cream. One young lady, who was overcome with despair, tried to end her life. She ran away and left a suicide note. But the modern-day Chashmonaim searched in the darkness of night and found her flickering soul, brought her to the hospital, and, hopefully, she is on the road to recovery.

There were very dark moments, some in which many of the members of the community wondered how they would persevere. But now, as they see the light at the end of the tunnel, as the electricity begins to go back on, they can begin to rebuild their lives anew.

We all hope that the charon af manifested through an unleashed hurricane that destroyed portions of the East Coast unlike any storm in recent memory must have been pacified by the selfless response of Hashem’s children. The cold, shivering souls of Bayswater have been warmed by the fact that no Jew will ever be left alone.

All these heroic efforts were summarized by Rabbi Feuer, when he reminded me of a story from Rav Shalom Schwadron:

A young man, Shmuel, arrived at a concentration camp along with his entire family. Within moments of their arrival, he was sent to the right and his family members to the left. One motion of the thumb determined the fate of the rest of his family members. They headed toward the gas chambers and were immediately annihilated.

Shmuel’s grief knew no bounds, but there was no time to wallow in self-pity. The German guards barked at him and the others to undress and undergo a cleansing process. They would be shorn and forced to endure a painful dip into a tub of cleansing agent, which was mainly composed of burning acid.

One by one, the prisoners were transformed from humans into hardly recognizable creatures. Their hair was cut and they were tossed into this tub. They did not remain there for more than a second or two, lest they burn themselves. But Shmuel, inexplicably, stayed in there for a lengthy period of time. His fellow inmates were shocked, but there was no time to dwell on these matters at the moment.

After the entire day, Shmuel collapsed on the slab of concrete that had now become his bed. He lay there, staring off into oblivion. But another young man who shared the slab with him, a friend from the past, asked him why he had lingered in the burning tub for longer than he had to.

After a long silence, he began to explain. “You know, hours ago, I arrived here with my family. We were all together, and we had made up that nothing would separate us. But within moments, that plan was destroyed. They were sent to their deaths and I was sent to life.

“When I was ordered to remove my clothing and immerse myself in the tub, one thought hit me. I am left with absolutely nothing in this world. I don’t even have clothing! But there is one thing that I have. Ribbono Shel Olam, I have You! I am not alone in this world. I still have You.

“And that thought was so comforting that I did not want to let go of it. That is why I remained in there for longer than I should have.”

Rabbi Feuer turned to me, and with tears in his eyes he said, “Kasheh olai preidaschem,” echoing the Al-mighty’s words, as He takes leave from us at the end of Sukkos (Rashi, Bamidbar 29:36). “It hasn’t been easy,” he explained. “But throughout the last two weeks, we have experienced a closeness with each other and a closeness with the Ribbono Shel Olam that is so very difficult from which to take leave.”

Rav Yitzchok (Itzele) of Vorki was a very close friend of the Kotzker Rebbe, Rav Menachem Mendel Morgenstern. They made a promise to each other that whoever dies first will appear to the other one in a dream to tell what is transpiring in heaven. A month after the passing of Rav Yitzchok, his son came of the Kotzker to ask if he had heard anything from his father. The Kotzker responded that he had not. Because of that, he had ascended to heaven to seek out his friend.

When he came up, he asked if anyone had seen Rav Yitzchok. They all pointed him in the direction of a forest. He walked through the forest until he finally spotted Rav Yitzchok, who was standing by what seemed to be the ocean. He asked him why he had not gone on to Gan Eden. Why was he standing there?

Rav Yitzchok told the Kotzker to listen. Suddenly, he heard the most terrible cries. He could not understand where the cries were coming from. Rav Yitzchok explained that they were coming from the ocean. This was not just any ocean. It was an ocean formed from the tears of Klal Yisroel.

Rav Yitzchok turned toward his friend and said, “I promised the Ribbono Shel Olam that I am not leaving here until the tears in this ocean achieve what they were meant to. I will not leave here until all the tzaros and tears come to an end…”

Hurricane Sandy brought with it an ocean of destruction and left behind a sea of tears. But if the past two weeks are any indication – and they are – those tears are watering the seeds of joy.

The community of Bayswater, along with so many other communities, has suffered greatly. People have lost so much. We must never forget that. And we must double our efforts to donate and raise money to assist them in their recovery. Tens of millions of dollars are needed, as darkness has enveloped their lives.

But for many, the lights of their neshamos, and the eternal glow of the Chanukah candles, have been ignited as never before.