The Alligator or the Gorilla 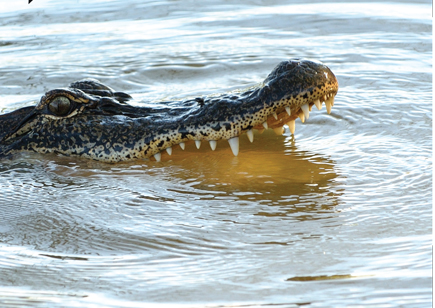 By now, everyone has heard and read about both sad stories. The Cincinnati gorilla was shot to save the child and the Orlando alligator that drowned a child was killed as well. Much has been written, secularly and religiously, about our societal priorities in favoring the child over the gorilla. The secularists generally bemoaned the loss of an innocent creature, while religious people the world over instantly understood that in the tragic conflict between animal and beast, there is ultimately no contest at all. One was created in the image of G-d and one may be slaughtered for food or medical research. I don’t believe anyone bemoaned the death of the alligator, an amphibian widely depicted as cold-blooded and heartless in dragging the sweet little boy to a watery death. Yet, both sets of parents were widely criticized for neglecting their child, sometimes with the implication that there was some kind of equivalence between the death of man and beast.

I must confess to some sense of déjà vu, having already written two columns about this subject in these pages (“Are You a Man or a Mouse?” [June 5, 2015] and “Rising Above the Uproar” [August 8, 2015]). Nevertheless, as the drumbeat equating man and beast grows ever louder, there is more that needs to be said. So, without repeating, defending or retracting, let us return to the menagerie for another Torah look.

We have already mentioned in these articles that Shlomo Hamelech speaks often in Koheles about the ostensible similarity between man and beast. However, in truth, this is a theme throughout Tanach. Many Nevi’im speak concurrently of “man and animal” (Yirmiyahu 50:1; Yechezkel 14:13; Chagai 1:11; Zecharia 8:10, etc.). In fact, by one calculation (see Otzar Archei HaTorah/Oholei Yissochor, page 83), this close referencing of human beings and animals appears 88 times in Tanach. One must wonder about this odd juxtaposition. Surely, the Torah teaches us clearly that human beings are created b’tzelem Elokim and animals have only a nefesh habehamis – an animalistic soul – which it shares with man only for certain physical characteristics. Otherwise, we have very little, if anything, in common, so why does the Torah mention us in the same breath so often?

Interestingly, Chazal seem to add to the mystery with several statements such as “man is destined to die and [some] animals are destined to be slaughtered” (Brachos 17a) and “people place the image of an animal over a grave until they can erect a monument” (Brachos 19b). What exactly is the message from both Torah Shebiksav and Torah Shebaal Peh on this very important matter?

Paradoxically, both a deepening of the question and the answer may be found in the same place. A well-known Gemara (Kesubos 66b) tells a story about the Tanna Rav Yochanan ben Zakkai, who was riding on a donkey outside Yerushalayim, followed by his students. Suddenly, he noticed a grievous scene. A young girl was collecting bits of barley from the dung of animals belonging to Arabs. When the great sage approached, the doleful young woman composed herself and begged for help. Upon discovering that she was the daughter of the formerly wealthy Nakdimon ben Gurion, Rav Yochanan ben Zakkai issued an odd declaration: “Ashreichem Yisroel – Fortunate are you, O Yisroel. When you do the will of the A-mighty, no nation can oppress you. However, when you do not do the will of the A-mighty, you are placed in the hands of a lowly nation. But not only into the hands of such a nation itself, but even into the hands of their animals.” Again, the uncomfortable apposition with animals.

The Maharal (Netzach Yisroel, chapter 14) is shocked at Rav Yochanan ben Zakkai’s choice of words. “Where is the Ashrei?” he demands. What did Rav Yochanan ben Zakai see that caused him to reflect positively upon the plight of the nation of Klal Yisroel? Surely this was a tragic sight and nothing more. The Maharal explains, in somewhat cryptic fashion, that when Am Yisroel is surrendered to such a menial nation and placed even below their animals, it is as if “ain lo metzius klal…uche’ilu nechshav ne’edar – they have no existence at all.” Now, what does it mean to be alive, even in the most minimal of ways, and yet to “have no existence”?

Rav Chaim Soloveitchik (quoted in Orchos Hamussar, page 26), although others (Chochmas Koheles 1:242) attribute this to his son, the Brisker Rov, explains, based upon the famous delineation of the Kuzari (1:30-35), that the world was originally created with four levels of existence: domeim – the inanimate, such as rocks; tzomeiach – the vegetative, such as plants; chai – the animal world; and medaber, which refers exclusively to human beings. Later, another level, Klal Yisroel, was added (1:41-42).

Rav Chaim klers a chakirah – considers a seemingly hypothetical thought question. Is tzomeiach merely a step above domeim or is it an entirely new entity? The same question is applicable to each of the stages. Is one just better than that which is below or is it actually a new species?

Rav Chaim answers by exploring what happens when each deteriorates and dies. For instance, does a dying flower become a stone? Does a dead cow turn into a flower? A human being doesn’t turn into a cow upon his demise. This proves that each category is indeed a new variety of being, a genus unto itself. If that is true, then Klal Yisroel, too, when it loses its edge as the fifth stage of existence, falls lower than the rest of mankind and lower than the animals themselves. That was the tremendous optimism of Rav Yochanan ben Zakai’s conclusion upon the lamentable sight of Nakdimon’s daughter. We had fallen lower than anyone; we were literally and figuratively below the animals. But there, teach the Maharal and Rav Chaim, is the secret of our greatness. We are not only a medaber; we are Yisroel, for when we fall, we never return to being merely human, for ultimately we are unique and peerless when we do guard our singularity properly.

We are now in a position to understand why the Torah juxtaposes us so often with the animals. We do indeed represent the pinnacle of existence, but, at the same time, we must remember how fragile our distinction from the beasts can be. Neither wealth nor status can stand in the way of a precipitous fall when we have not lived up to our expectations. But, with Rav Yochanan ben Zakkai, the Maharal and Rav Chaim Brisker, we can shout, “Ashreinu!” because even – and perhaps especially – in our most pathetic state, we instinctively know that we are different. If it is being slaughtered in the Crusades, leaving Spain in 1492 or going to the gas chambers in 1942, we knew that we are not just Homo Sapiens, but Am Yisroel, in a class of our own.

The Chasam Sofer (Devorim 4:4) adds even more optimism. He points out that each of the stages of life contributes to the one above it. The inanimate earth generates the vegetative world, which grows directly from its soil. Animals eat the grains and plants, whereupon man, in turn, consumes animals. If he is fulfilling his role as the zenith of creation, every aspect of the universe wins, for he elevates them all. Hence, the posuk (ibid.) concludes “chaim kulchem hayom – all of you are alive today,” referring to all the elements of creation (see, also, Rav Yerucham Levovitz in Daas Chochmah Umussar 2:292).

This approach may explain a mystifying Medrash (Bereishis Rabbah 26:12 and Tanna Devei Eliyahu 24). Chazal teach us that all of creation – even trees, various animals and objects that were used to hurt people – must eventually stand in judgment. Now, we know that none of these things have free will to choose good or evil, so how can they possibly be judged? It would seem that since Hashem created nature cumulatively, with each stage contributing to the next, they will all benefit or be chastened for being used improperly. Of course, it is man who will stand in judgment, but everything else will be affected as well (see also Imrei Shammai, Devorim, page 171).

Most people have judged the gorilla innocent but the alligator guilty. But we know better. It is not either of them. It is us. Not necessarily the frightened and traumatized parents or the residents of zoos and lagoons, but all of humanity is being scrutinized as we approach the End of Days. As in ancient Mitzrayim, when the animals came out of their forests and jungles to punish the Egyptians, we are witnessing and experiencing a universal appraisal. Some see climate change and stranger weather than usual. Others are puzzled by the behavior of our fellow creatures on the planet. But perhaps there is a message here for all of us at the top of the pyramid. Reclaim your lofty status. Everything depends upon you.