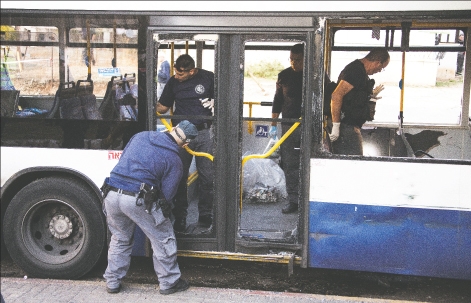 Sharp-eyed passengers and the prompt response of a chareidi bus driver miraculously saved 12 people traveling Sunday from Bnei Brak to Bat Yam from a terrorist bomb discovered near the end of the route. The bomb exploded ten minutes after they fled the bus, blowing out windows and charring its sides. The bombing is part of a recent upsurge in terrorist incidents, which included the killing by a sniper Tuesday of an Israeli-Arab employee of a civilian firm who was repairing the Gaza border security fence near Nachal Oz. The incidents come a week before the next scheduled release of jailed Palestinian terrorists in conjunction jailed Palestinian terrorists in conjunction with the Israeli-Palestinian peace talks.

Israeli security officials say that they do not see any evidence that the recent attacks have been coordinated, or that they could signal the start of a third intifada. However, the sniper attack Tuesday was a direct violation of the Egyptian-brokered cease fire agreement with Hamas which has been in effect since November, 2012. Prime Minister Netanyahu called it “an extremely serious incident” and promised “we will not stand by. The army then launched artillery and air attacks against six Hamas and other terrorist targets in Gaza.

The bombing of the bus Sunday had the potential to cause extensive loss of life and was only averted by a miracle. Passenger David Pappo described how he warned the driver there was a bomb aboard.

“One of the kids told me that a large bag was left on the bus,” he said. “Everyone told me it was nothing, but the driver stopped the bus and I went to see what he was talking about. When I tried lifting the bag I saw it was quite heavy. I opened its zipper and saw a pressure cooker inside and as I continued opening it I saw a red wire joined with white insulation tape. I told the driver to get everyone off the bus.”

“It was towards the end of my day’s work, at the end of the line from Bnei Brak to Bat Yam,” he said. “A woman traveling in the bus approached me and said there was a large black bag behind the back door that didn’t belong to anyone and one of the passengers had seen wires inside it. This was just before a bus stop. I dropped off all the passengers and got off myself. The police were called in at the same time.

RIDING WITH A BOMB FOR 40 MINUTES

“A few minutes after we moved far away from the bus there was a large explosion. I realized an explosive device had been sitting with me inside the bus for forty minutes, at least from Ramat Gan… Boruch Hashem, we experienced a miracle today.”

“This could have ended in tragedy. Who stopped the terrorist device from exploding? Only hashgohah protis!”

Michael, a chareidi Jew who has worked for the Dan bus company for the past 35 years, said he’d be returning to work the next day. He recalled that he was about 100 yards away from the 142 bus bombing in Tel Aviv during the Pillar of Defense Campaign against Gaza last year, in which 28 people were wounded.. Michael said that after the Sunday explosion he returned home and later attended his daily shiur in a local shul.

“I spoke with my rov in connection with the miracle and he told me I had to recite Birkas Hagomel,” he said. “With Hashem’s help, I intend to get an aliyah in shul this Shabbos and bless and thank Hashem for the neis.”

A police sapper approaching the bomb to defuse it suffered light ear damage from the blast and was taken to a nearby hospital. Israel’s security forces had no prior warning of a terrorist attack. Police conducted extensive searches to locate the bomber.

The US and Britain condemned the attack. Hamas and the Islamic Jihad did not take responsibility for the attack, but praised the perpetrator.

“This is a natural response to Zionist crimes,” said a Hamas spokesman. “The act proves that the Palestinian people are on one side, and Abu Mazen and the negotiations are on the other side.”

An Islamic Jihad official said he hoped the attack “could usher the resumption of suicide attacks” and that it showed “the Palestinian people no longer accept that Israeli attacks continue without any real response.”

There were two other attacks Sunday. A rocket launched from Gaza exploded harmlessly inside Israeli territory, and a policeman was stabbed at the Mishor Adumim junction near Yerushalayim. The officer’s condition stabilized following surgery, in what doctors described as a great miracle given that the 6 inch knife struck very close to the officer’s heart and other vital organs.

On Shabbos, the army shot and wounded a terrorist in Gaza who was trying to conceal an explosive on the security fence.

The previous day, terrorists threw rocks at soldiers by the Gaza border near Beit Hanun and fired a mortar which hit the Shaar HaNegev regional council.

Over the past four months, two soldiers and one civilian have been murdered in the West Bank and one soldier inside Israel, in addition to dozens of non-fatal terrorist attacks each month.

FIRST DAY ON THE JOB

The civilian worker who was killed Tuesday while repairing the security fence was identified as Salah Abu-Latif, 22, from the Bedouin community of Rahat. He was an employee of a drilling company which the army hired to repair damage caused by the recent storm to the security fence. It was his first day on that job. He suffered a single chest wound and died shortly after being evacuated to Soroka hospital in Beer Sheva. He was apparently shot by a sniper from inside Gaza, not far from the border fence.

The incident occurred as Israeli Prime Minister Netanyahu was visiting the nearby town of S’derot, a frequent target of rocket attacks from Gaza, to inaugurate a new rail line.” He said that Israel’s “policy until now has been to act beforehand and to respond in force, and this is how we will act regarding this incident as well.”

Israeli Defense Minister Moshe Yaalon said after the sniper attack, “I recommend to Hamas not to test our patience and to assert its authority [in Gaza]. If there isn’t quiet in Israel, there won’t be quiet in Gaza.” Yaalon accused the Palestinian Authority of promoting incitement and hatred of Israel that have created an environment for violence.

The Israeli military said the targets it hit in Gaza included a weapons-manufacturing facility, “terror infrastructure” and a concealed rocket launcher. Hamas ordered its forces to evacuate offices and compounds and redeploy to safer sites.

A Hamas Health Ministry official said an air strike killed a 3-year-old girl and wounded three relatives, including two young siblings. In all, 10 people were wounded, he said.

The number of reported terror attacks has been rising steadily from 82 in July to 167 last month. Justice Minister Tzipi Livni said the PA has no connection to the terrorist attacks and that they should not be allowed to interfere with the peace talks.

“We will not allow criminal terrorists to determine Israel’s future. Israel continues to act against terrorism and in this case too, if it is indeed terrorism like it appears, we will do what needs to be done,” said Livni.

At the same time, Livni stressed, “We owe it to ourselves to exhaust every opportunity to reach an agreement. We will continue to use force against terrorism and promote negotiations that reflect our interests, including security.”

Minister Naftoli Bennett disagreed. He said that the PA does in fact bear responsibility for the attacks. “We continue the diplomatic process as if there is no terror, while the Palestinians are continuing the terrorism as if there is no diplomatic process. The claim that the Palestinian Authority is not connected to the attacks explodes in our faces every day. When you educate your children starting in kindergarten to commit acts of terror, when your broadcasts paint Jews as monsters, when even Tel Aviv is not on your map, you are a terrorist.”

The Associated Press and Arutz Sheva contributed to this article.