A Surprising Avodah for Shavuos 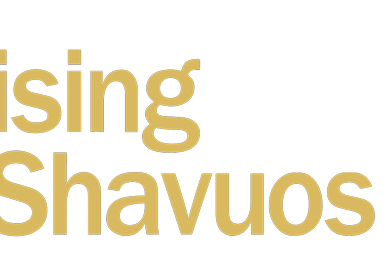 Everyone knows that Shavuos is all about learning Torah. We stay up all night, we lain the parshah of Matan Torah and we try to enter the summer with renewed hasmadah and dedication to limud haTorah. However, there is also an important middah, profoundly linked to Shavuos, whose lessons began on Pesach and culminate this week with Shavuos. That is the middah of hakoras hatov, truly feeling and expressing gratitude for our blessings.

One of the common denominators between Pesach and Shavuos is the mitzvah of bikkurim, offering the first fruits of our harvest to Hashem. The Haggadah Shel Pesach is largely based upon the four pesukim (Devorim 26:5-8) recited when offering bikkurim to the kohein in Yerushalayim. Of course, bikkurim is not only one of the mitzvos associated with Shavuos, but constitutes one of the names of this Yom Tov (Bamidbar 28:26). As the Sefer Hachinuch and many others explain, the essence of bikkurim is our obligation to thank Hashem for His beneficence, utilizing both actions and words to express our appreciation. But what does this have to do with Shavuos?

The Ramban (Shemos 20:17), in a lengthy exposition, explains that Matan Torah was actually a colossal test to determine if we understand and are properly grateful for the incredible gift of the Torah that we were granted. Regarding the place of hakoras hatov at the Seder, Rav Dovid Cohen (Birchas Yaavetz 3:224) relates the centrality of the bikkurim theme to the Mishnah requiring that we begin the story of Yetzias Mitzrayim with our lowliness (genus) and end with praise for our elevation (shevach). He points out that one of the most basic aspects of hakoras hatov is establishing how bad things were before and how drastically they have changed for the better. This requires us to enumerate the sad state of our slavery and even depravity and to then acknowledge the magnanimous redemption we experienced from all these deplorable conditions.

In a separate piece in the same volume (page 276), Rav Cohen points out that on Shavuos we must also thank Hashem for giving us the tools (i.e., the Torah itself) to combat the yeitzer hara. As he concludes, the criticism of Klal Yisroel for not properly reciting Birchas HaTorah (Nedorim 81a, with Ran) is actually a rebuke for not being sufficiently grateful for the gift of the Torah. Armed with these insights, we can now understand that the entire period from Pesach to Shavuos must be suffused with the common theme of these Yomim Tovim, of recognizing Hashem’s kindness and attention to our needs. In truth, Hashem taught us this fundamental lesson at the very beginning of creation. Although the world immediately required rain, Hashem did not allow it to rain until man arrived on the scene to appreciate this heavenly largesse (Rashi, Bereishis 2:5). The Maharal (Gur Aryeh, ibid.) adds that since it is forbidden to perform chesed to one who is unappreciative and no other creature has this ability, Hashem waited to grant rain to the earth when man come on the scene to show gratitude.

Rav Yitzchok Zilberstein (Lechanech Besimcha, page 95) tells movingly of a rosh yeshiva in the Switzerland of his youth who installed an aquarium in the hall of the yeshiva, so that the talmidim would be inspired to thank Hashem for His creations. He further strongly suggests that Jewish children be trained to listen carefully to the song of the birds, an activity that leads to both hakoras hatov and personal serenity. These examples demonstrate dramatically that the middah of hakoras hatov began at creation and is crucial to our spiritual lives today.

Rav Shlomo Wolbe (Daas Shlomo, page 30) grants us an incredible insight into the Shavuos avodah of bikkurim and hakoras hatov. He quotes the posuk (Devorim 26:3) delineating the text that the farmer recites when he offers bikkurim. Rashi states that it is to testify that “you are not an ingrate and unappreciative of Hashem’s goodness.” Why, Rav Wolbe asks, does Rashi put this into the negative? Why not simply state that “I am grateful to Hashem”? He answers that there are, in fact, two aspects to the bikkurim lesson. The first is to eliminate our bad middah of being a kofuy tovah, not appreciating what we have been given. Only then can we begin traveling down the road of positively feeling and expressing hakoras tovah. He quotes the Chovos Halevavos (beginning of Shaar Habechinah) and the Alter of Kelm that for the majority of the time, most of mankind forgets that there is a Creator who gave and provides us with everything we have. Rav Wolbe, in these shmuessen, which were delivered on or just before Shavuos, teaches clearly that Shavuos is inexorably bound up with hakoras hatov.

We might add to these powerful sources that perhaps one aspect of reading Megillas Rus on Shavuos relates to hakoras hatov. Rus, of course, hailed from the nation of Moav, whose males were forbidden to enter Klal Yisroel. What was their great sin? The Ramban explains that since Amon’s and Moav’s ancestors were saved by Avrohom Avinu, they should have met us in the desert with, at the least, the most minimal welcome of bread and water. The Alter of Kelm (Chochmah Umussar 1:12) uses this condemnation of Amon and Moav as a lesson for us all in hakoras hatov. “Imagine what an obligation we all have,” he teaches, “to be grateful to our elders.” Rus, who is forever called by the appellation Hamoaviyah, of Moav, provided an antidote to their flaw by constantly acting and teaching the principle of gratitude. By doing this, she not only removed any possible taint of Moav, but uplifted her progeny to the point that Malchus Bais Dovid and Moshiach himself are proud to be her children.

Rav Eliyahu Eliezer Dessler (Michtav M’Eliyahu 1:142) asserts that “it is possible for one to see open miracles and yet not gain any new feelings of faith if he doesn’t internalize gratitude for these amazing phenomena.” This may also explain why Hashem did indeed perform astonishing miracles at Matan Torah, but also taught us Who did them and why. This was to instill in us the lesson of never taking anything for granted and affirming the source of our bounty. Thus, not only should we seize the opportunity in our times to work on our hakoras hatov on Shavuos, but we are, in effect, emulating what Klal Yisroel did at Matan Torah.

My rebbi, Rav Yitzchok Hutner, often repeated the exhortation of his own rabbeim, the giants of the mussar movement, that someone who does not show hakoras hatov – a kofuy tovah – is barely human and spiritually toxic to others. In fact, Rav Chaim Vital (Shaarei Kedushah 1:6) goes so far as to say that forgetting the favors someone did for us “is one of the three worst spiritual ills.”

In preparing for the hakoras hatov part of the Shavuos avodah, we will mention two stories that can help guide us. When Rav Isser Zalman Meltzer, author of the Even Ha’azul passed away, he was buried in the chalukah derabbonon, the rabbinic section, of Har Hamenuchos. Rav Elazar Menachem Man Shach immediately purchased a plot for himself so that he could be with his beloved uncle and rebbi for eternity. However, when a certain dayan passed away at an early age, Rav Shach yielded the plot to him, since he, too, had wanted to be buried near Rav Isser Zalman. Many asked Rav Shach why he would give up such an important wish that involves many mitzvos and eternal fulfillments. Rav Shach answered simply that this dayan had helped him move from the north, very close to Lebanon, to Yerushalayim. Rav Shach clearly felt that there is no limit to the obligations of hakoras hatov.

A famous story about Rav Yisroel Zev Gustman also illustrates this middah, but with an amazing twist. Rav Gustman was a very young member of Rav Chaim Ozer Grodzensky’s Vilna Bais Din and often took walks with his mentor; these were necessary for the older man’s health. Many times, Rav Chaim Ozer would point out various plants, mushrooms and other unusual forest growths. Amazingly, he seemed to know the efficacy of each plant, telling his young protégé what he could eat and what was dangerous. Rav Gustman listened politely, but could not fathom why Rav Chaim Ozer, the gadol hador, would be sharing this information. Later, under the Nazi occupation, Rav Gustman had to live in the forest for a year and was sustained by the edibles and was able to avoid the poisonous ones. When he moved to Eretz Yisroel, Rav Gustman made sure to plant a garden with the plants that had saved his life so that he could show them proper hakoras hatov.

The lesson Rav Gustman taught is actually the same one we experience every Shabbos and Yom Tov when we cover the challah while we make Kiddush on the wine. We do not want the challah “to be embarrassed” that it is not being used for Kiddush. Now, as the seforim point out, everyone knows that challah has no feelings, just as Rav Gustman’s plants would not express gratitude. But he had to do the right thing because “ha’adam nifal lefi pe’ulosav – man is what he does” (Sefer Hachinuch). If we just say thank you to those who do so much for us on Shavuos, we will have taken a giant step toward being the people to whom Hashem gave the Torah.