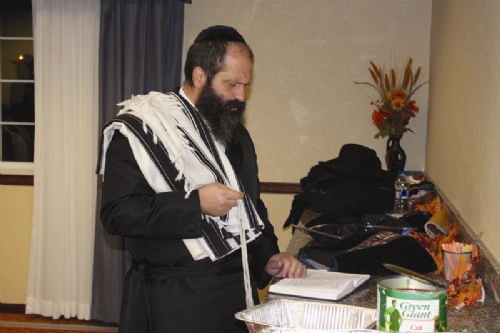 The nation's most prestigious authority in legal and judicial ethics has issued a scathing indictment of Judge Linda Reade's conduct in the Rubashkin case. In a written legal opinion addressed to the Eighth Circuit Court of Appeals, Professor Mark Harrison, one of the key architects of the Code of Judicial Conduct - the country's standard judicial ethics guidebook - asserts that Judge Reade repeatedly violated the Code's provisions. Harrison's affidavit accompanies a new motion, filed this week by Sholom Mordechai Rubashkin's lawyers, for a stay [postponement] of the September 7 deadline for filing an appeal.

Defense lawyers are requesting that the Eighth Circuit first consider the merits of the Motion for a New Trial that was filed several weeks ago. If a new trial is granted, an appeal would be unnecessary.

Professor Harrison’s affidavit, attached to the motion for a stay, powerfully bolsters defense arguments that Sholom Mordechai’s trial was tainted by Judge Linda Reade’s judicial misconduct and should therefore be vacated.

“Based on my experience and my review of the facts and documents, it is my opinion that Judge Reade violated several provisions of the Code of Conduct applicable to federal judges,” Professor Harrison wrote.

The renowned legal authority studied the defense’s Motion for a New Trial filed in early August and the government’s response to that motion. His scrutiny included the new evidence released under the FOIA [Freedom of Information Act], after defense attorneys sued the government to obtain the information.

Those documents showed that Judge Reade had initiated and authorized private meetings with federal prosecutors and law enforcement agents that crossed permissible bounds. Compounding the impropriety, she concealed this information from the defense team when they were considering the possibility of requesting her recusal.

The U.S. Attorney’s Office hotly contested the defense motion, belittling the disclosures in the FOIA documents as “nothing new.” True, Reade had attended numerous meetings with federal prosecutors, the brief conceded, but her involvement was limited to logistics. She was never told at these meetings who the raid would target or where it would take place, and her neutrality was therefore never compromised.

Professor Harrison ignores these protestations in his affidavit to the Eighth Circuit, stating unequivocally that Reade’s more than ten private meetings with law enforcement officials and prosecutors violated the Judicial Code.

“Meetings or communications about impending litigation between a judge and only one side, to the exclusion of the other parties or their lawyers [known as ex parte], are prohibited,” Harrison wrote.

The rules barring ex parte meetings are designed to safeguard the judicial process, “to prevent its corruption through bias, prejudice, coercion and exploitation,” he stressed.

Those safeguards were violated by the multiple meetings which occurred between October 2007 and May 12, 2008, in which Reade participated.

“The meetings in question all concerned an impending matter – the Postville raid and the arrest of Agriprocessors employees and officials – and therefore clearly involved what the Code of Conduct defines as ex parte,” Harrison wrote.

Harrison’s affidavit cited a letter to Rep. Zoe Lofgren by attorney Rockne Cole in connection with the July 2008 Congressional Hearing into the details surrounding the controversial ICE raid and the subsequent Postville prosecutions.

At the time, the government’s actions drew blistering criticism from eyewitnesses and voices in the legal community who protested the gross violation of the defendants’ civil rights.

Cole described a “secret” meeting of defense counsel assembled by the court to arrange for the representation of defendants arrested in the Agriprocessors raid. The meeting was attended by people from the U.S. attorney’s office who explained the procedures that had been prearranged for the processing of the arrested immigrants.

Harrsion singled out a statement in Cole’s letter that proved beyond a doubt that Judge Reade participated in plea discussions between lawyer and client that should have been off limits to her as the future presiding judge.

“What I found most astonishing,” wrote Cole, “is that apparently Chief Judge Reade had already ratified these deals prior to a single lawyer even talking to his or her client. This directly violates the Rule 11 plea procedure, which provides that ‘the court must not participate in these plea discussions.’

“Rockne Cole put his career on the line by writing that letter,” said David Leopold of the American Immigration Lawyers Association [AILA], who has written extensively about the travesty of justice committed in Postville, in which hundreds of defendants were misled into waiving their rights.

“There were undoubtedly many present at that meeting who were repulsed by what was going on, but Cole had the moral courage to dissent,” Leopold said.

Other legal observers note that almost without exception, the plea deals the defendants were coerced into signing were “binding,” meaning that they came with a mandatory five months imprisonment, followed by deportation. This fact, too, hints broadly at Reade’s collaboration with federal prosecutors.

The power to hand down sentences lies at the heart of a federal judge’s immense clout.

Judge Reade is notorious for using her sentencing discretion to impose uniquely harsh sentences, often going beyond the prosecutors’ recommendations.

In the case of a binding plea deal, however, the judge renounces her sentencing discretion – she cannot raise or lower the sentence – and the defendant waives his right to a trial, or to change or withdraw his plea. Because they etch the defendants’ decisions in stone and allow for no flexibility on the judge’s part, binding plea deals are rare, experts say.

Yet, in the mass proceedings in the Postville prosecutions, hundreds of binding plea deals calling for jail sentences and deportation were pre-scripted and signed by the defendants in a matter of a few days. They were then presented to Judge Reade, who, without discussion or debate, instantly rubberstamped them.

The only way this could have happened with a powerful, controlling judge like Judge Reade is if she herself had orchestrated the plea deals with prosecutors ahead of time. There is no other way she would agree to give up her sentencing discretion in hundreds of cases, insiders said.

Professor Harrison in his affidavit addressed the government’s argument that “difficult and unprecedented logistics” involved in the processing of hundreds of defendants justified Reade’s prior communications with law enforcement officials and prosecutors.

“Logistical requirements do not negate the prohibition of ex parte communications, nor do they excuse the failure to make a complete written record of them, and to disclose them at the earliest possible time,” Harrison countered.

His affidavits echo the question many have voiced after reading the government’s brief: why was there no attempt to address the fact that Judge Reade made no disclosure of her many meetings with prosecutors and ICE agents? Whether those meetings were improper or not, the government’s total silence on her failure to disclose them is revealing.

In addition to the multiple breaches of ethics cited above, Harrison’s affidavit notes a final overarching violation of the Judicial Code: Reade’s “failure to recuse herself from presiding at the trial of principal defendant arrested in the raid that was the subject of her ex parte meetings.”

Sholom Mordechai’s motion for a new trial is generating probing questions in many quarters, forcing people to turn back the pages of recent history for a fresh look at events.

“The Postville events are returning to haunt the U.S. Attorney’s Office and Judge Reade,” observed a member of AILA. “They would prefer to rewrite history – and might have succeeded – except for the testimony of a few who stood up at the time for human dignity and American justice. Their testimony is frozen in time – a voice that can’t be silenced.”