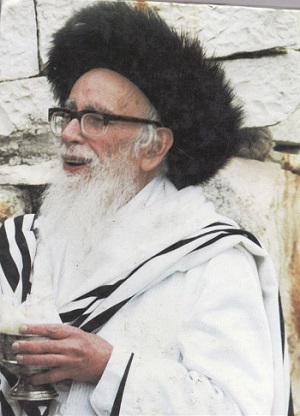 Rav Shlomo Zalman Auerbach grew up in a time of great poverty in Yerushalayim. As a child and bochur, his family was so poor that Rav Shlomo Zalman would often go to learn in yeshiva without have eaten anything at all because he wanted to leave the little bit of food in the house for his younger siblings. He once said, “When I was young, I had more than enough reasons al pi halacha to absolve myself from learning.” Rav Shlomo Zalman, however, never used these heteirim. In fact, in his later years, doctors told him that he suffered from general weakness and other health problems because as a child and teen, he suffered from acute malnutrition. On another occasion, Rav Shlomo Zalman said, “If when I was young, I wouldn’t have learned every time I had a headache, I would never have learned anything! I always had a headache!”

Once, in Rav Shlomo Zalman’s final years, he was walking home after davening Shacharis and felt very weak. He was so exhausted that he needed to hold onto both sides of the railings on the stairs leading up to his house and pull himself up the steps. As he reached the top step, he realized that a long line of people was waiting to ask him shailos and speak with him. He was so tired and sick that with his last bit of strength, he approached the line and said, “I simply have no strength. If it is possible to come another time… please come a different time.”

One of the people waiting to speak with him on that occasion was his nephew, Rav Tzvi Rotberg, rosh yeshiva of Bais Meir (Rav Tzvi was married to Rav Shlomo Zalman’s niece, the daughter of his sister and brother-in-law, Rav and Rebbetzin Simcha Bunim Leizerson zt”l). As soon as Rav Shlomo Zalman noticed him, he asked him to come inside. Rav Tzvi refused, saying, “The uncle doesn’t feel well. I will come a different time.” Rav Shlomo Zalman replied, “I don’t feel well, but that will only last until we start learning together!” They began to talk in learning. As they became involved in the depths of a sugya, Rav Shlomo Zalman became infused with a newfound strength.

On another occasion, Rav Rotberg came to talk in learning with Rav Shlomo Zalman. As he was walking up the stairs to his uncle’s home, Rav Shlomo Zalman’s sister was coming down the stairs and told Rav Rotberg, “It’s a pity you are coming now. My brother is not feeling well, and he barely nodded his head to me to acknowledge my presence when I came in.”

Rav Rotberg, who knew that he would not be returning to Yerushalayim before Rosh Hashanah, went to ask Rav Shlomo Zalman’s son, Rav Boruch, if he could at least go in for a minute to get a brocha in advance of the New Year. Rav Boruch asked Rav Shlomo Zalman, who instructed him that Rav Tzvi should be allowed in. Amazingly, after just a few seconds, the two became involved in a conversation about peiros that belong to a gentile during the shemittah years. Suddenly, Rav Shlomo Zalman’s weakness seemed to have disappeared. With the energy of a young man, the two debated the finer points of the sugya, with Rav Shlomo Zalman becoming so involved in the sugya that he forgot his weakness completely.

A Question Of Pikuach Nefesh

Rav Shlomo Zalman had a small room in an apartment at the edge of Shaarei Tzedek where he would learn himself or with a chavrusa. That room was known to only a few people. Rav Shlomo Zalman went there when he wanted to learn undisturbed. Every day from 10-1:30 in the morning, he would learn there. One day, while he was learning with his chavrusa, Rav Yitzchok Eizik Prag, someone began to knock on the door. Rav Shlomo Zalman told Rav Prag, “Don’t answer. Now we are learning!”

On a different occasion, there was knocking on the door, but this time the knocking was extremely loud and didn’t stop. Suddenly, they heard a person scream, “It is pikuach nefesh!”

Rav Shlomo Zalman was not moved. He told his chavrusa, “I am not a doctor,” and continued learning.

Rumors began to spread that the British Mandate that ruled Palestine at that time was about to impose a tax on all landowners. Everyone who owned land was trying to figure out how to get around the new law.

Rav Shlomo Zalman realized that worry over the parcel of land was affecting his ability to concentrate fully on his learning. Therefore, he got up one day and journeyed to Bat Yam. Upon arrival, he entered the first real estate office that he saw and put his parcel of land up for sale. A buyer was found, but the buyer wanted to pay a price that was considerably lower than what the piece of land was worth. Rav Shlomo Zalman neither bargained nor haggled; rather, he said it was worth it.

He returned to Yerushalayim, his face beaming from simcha. “Now I can learn without any worries. This was the best deal I have ever made!”

Rav Shlomo Zalman took the money that he had made from the sale and invested it in a savings account in a bank owned by non-Jews (to avoid questions of ribbis). Before depositing the money in the bank, Rav Shlomo Zalman asked if anything would be required of him once his money was deposited. He was told that every Friday he would have to dedicate a half hour to review the account.

Rav Shlomo Zalman answered, “If that is the case, then this investment is not for me. It will take my head out of my learning.”