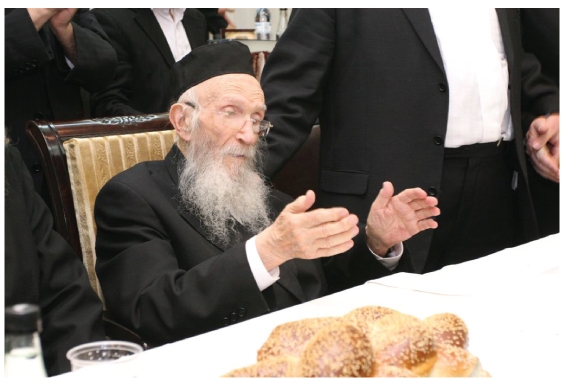 Thursday, 26 Sivan/June 24, is the third yahrtzeit of Rav Michel Yehuda Lefkowitz ztâ€l, rosh yeshiva of Ponovezh Yeshiva L'tzeirim, whose greatness in Torah and sterling character continue to inspire Yidden around the globe.

Rav Michel Yehuda was the address for many rabbeim and mechanchim, who turned to him with their chinuch shailos. One veteran mechanech in Eretz Yisroel posed all his chinuch questions to Rav Michel Yehuda. One day, he presented a very personal question to the rosh yeshiva. “I feel like I am not shteiging individually,” the mechanech related. “I am considering taking two years off to recharge. I will go back to kollel and rejuvenate myself. I have been promised that I won’t lose my shteller. I just feel that I need some time off to get myself to where I want to be in terms of aliyah.”

The mechanech had little doubt that Rav Michel Yehuda would support his train of thought. He was thus stunned when the rosh yeshiva advised him to present the shailah to someone else for a decision.

“But rosh yeshiva,” asked the mechanech, “in all the years, you have answered every question of mine. Never have you referred me to someone else. Why now?”

Rav Michel Yehuda explained: “I have been in chinuch for 65 years. Ich hob kein mol nisht getracht vegen zich alein. I have never thought about myself. Ich hob nor getracht vegen der shteigen fun mein talmidim. I have focused only on the shteiging of my talmidim. If you are thinking about yourself,you have to go to ask your shailah to someone who understands one who thinks about himself.”

This was said with utmost humility and genuineness. Rav Michel Yehuda was giving an honest response: He simply didn’t possess the mindset to effectively answer the mechanech’s shailah. He had never thought vegen zich.

Rav Michel Yehuda suffered from poor eyesight for many years and underwent several operations. Despite his thick eyeglasses, as he aged, he struggled to see. When he was brought expensive new glasses that allowed him to read the Gemara with ease, his excitement was visible. It was the first time in years that he could see clearly.

His talmidim were surprised when, the very next day, Rav Michel Yehuda was seen in yeshiva wearing his old glasses. He later explained, “I will have to wait until bein hazemanim to make the change. If I enter yeshiva with the new glasses, it will create a distraction among the talmidim. It will cause bittul Torah.” After wearing the glasses during bein hazemanim, he said, the issue wouldn’t cause such a tumult when the next zeman commenced.

For Rav Michel Yehuda, it was worth enduring the tremendous inconvenience and struggle of poor vision so as not to cause bittul Torah among the talmidei hayeshiva for even a moment.

As is well known, the rosh yeshiva suffered the tragic loss of a child. He also endured the loss of an ainikel, a child of his son, Rav Moshe Dovid, a rosh yeshiva, mashgiach and rov. At the levayah, Rav Michel Yehuda delivered a hesped, and on the first day of shivah he went to be menachem avel his son, his daughter-in-law and the rest of the family.

On the third day of the shivah, he asked his grandson, Rav Yitzchok Karlansky, to accompany him to the bais avel. When they got there, the aveilim were sitting at one end of the room. Rav Michel Yehuda asked his ainikel for a chair to be placed at the other end, where he sat down. People came and went, asking him to move closer to the crowd, but he declined. After over an hour, Rav Michel Yehuda stood up, said, “HaMakom yenacheim esechem,” to the aveilim and left.

Perplexed, Rav Karlansky asked his zaida about his seemingly strange visit. After all, he had already been menachem avel. Why the additional visit?

“At the levayah and on the first day of shivah, that was for my tzaar, my pain. But how was I being mishtateif with the pain of my son and daughter-in-law and the rest of the family? How did I share in their pain? That’s why I went back. That was to be mishtateif in their tzaar.”

When he was already in his nineties, Rav Michel Yehuda held his customary kabbolas kahal on Chol Hamoed Sukkos, greeting person after person individually. Rav Michel Yeshuda’s warmth and sensitivity were legendary, and he took the time to wish each person ah gutten moed and inquire about their welfare.

Day turned into night. After about 4-1/2 hours of greeting people, he davened Maariv and then turned to his grandson, Reb Yossi Karlansky, and said that he is very worn out. “But I have not yet learned today,” he added. Rav Michel Yehuda had indeed learned earlier, but he was apparently not satisfied with that. “I am going to sleep for an hour,” he told his grandson. “Please wake me up then so I can learn.”

Rav Michel Yehuda went to sleep in the sukkah. An hour passed, but his grandson didn’t have the heart to wake up his grandfather, who was clearly exhausted. After several hours, Rav Michel Yehuda woke up and realized that he had “overslept.” He called his grandson, who explained that he didn’t want to wake up his tired zaida. “And lemaaseh,” Reb Yossi added, “you were sleeping in the sukkah and were thus being mekayeim a mitzvah – the mitzvah of sukkah – anyway.”

The rosh yeshiva’s lesson in treating people of all ages with respect and dignity was clear.

And then there are the priceless lessons he taught in his interactions with his rebbetzin.

Rav Michel Yehuda invited the rosh kollel to come inside, but the rosh kollel explained his hesitation. “I am sure that you had a good reason for not coming to the kollel today, but I thought that perhaps your rebbetzin doesn’t know, so I figured that I’ll just hand you the check and leave, so as not to bring any attention to it.”

Rav Michel Yehuda was confused by the rosh kollel’s suggestion that his rebbetzin would not be aware of whether he had left the house or not. “What do you mean?” he asked the rosh kollel. “I have never left my house without saying goodbye to my wife.”

Decades later, when he was over 90 years old, Rav Michel Yehuda was scheduled to address a major atzeres. For whatever reason, he was running late and it was unclear that he would make it to the event in time. He was en route to the gathering, about ten blocks out of Bnei Brak, when he turned to his driver and asked him to turn around and return home. The driver was taken aback, since they were running late, but he figured that Rav Michel Yehuda had forgotten something at home. When they arrived at his house, the driver offered to run inside and get whatever it was that the rosh yeshiva needed. Rav Michel Yehuda waved him off. With great difficulty, he got out of the car and made his way to his home. Upon entering and seeing his wife, he said, “Rebbetzin, I am so sorry! This is the first time in all our years that I left the house without saying goodbye and wishing you kol tuv.” He then asked his rebbetzin mechilah and wished her well before heading back to the car.

Many thanks to Rav Menachem Savitz, a close talmid of Rav Michel Yehuda, for sharing his reminiscences of the rosh yeshiva.