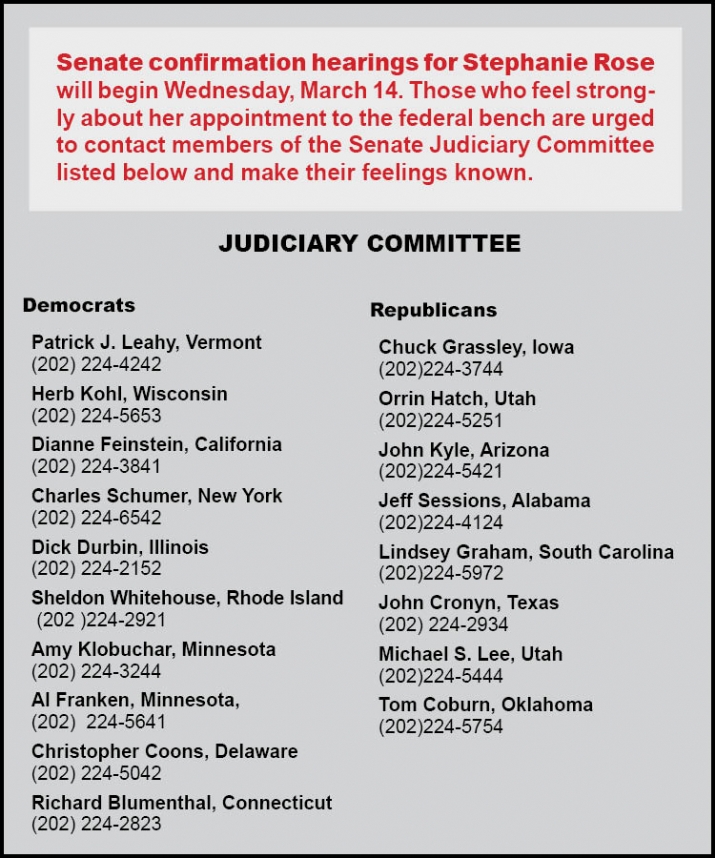 With the Senate Judiciary Committee poised to consider the nomination of U.S. Attorney Stephanie Rose to the federal bench, critics are urging committee members to take a searching look at this nominee who was a chief prosecutor in the controversial 2008 Postville Prosecutions. An op-ed in the Des Moines Register by Dr. Camayd Freixas, a federal interpreter who witnessed the prosecutions, adjured the Senate not to â€œrubber-stampâ€ Rose's nomination â€œas if Postville never happened.â€ â€œPostville, May 12, 2008, will be remembered in infamy as a stain on American justice,â€ he wrote. He urged the senators to question Rose closely about her role in the prosecutions that drew harsh criticism for alleged abuses of due process and civil rights. One of the most serious allegations against Rose's office concerned its collaboration with Chief Judge Linda Reade, who later imposed prison and deportation sentences on the defendants. The nation's top judicial experts have said that the judge's close involvement in the enforcement operation had compromised her neutrality, and should have compelled her to recuse herself from the trials of the defendants, including that of Sholom Rubashkin.
REVISITING ‘DISTURBING ALLEGATIONS’ ABOUT ROSE AND COLLEAGUES

The Des Moines Register article highlighted “the disturbing allegations of unethical ex parte communications between Rose’s office and the chief judge, in the planning of the raid and prosecutions for 8 months leading to the ICE operation.” It also slammed the “withholding of exculpatory evidence from the defense.”

“Rose saw nothing wrong with this, but considered it a proper role for both judge and prosecutor. So much for her ethics and impartiality.”

Dr. Camayd-Freixas wrote a detailed and widely quoted essay about the abuses he had personally witnessed. He also gave testimony to a congressional committee investigating the raid and the prosecutions of the defendants.

“More than 300 undocumented meatpackers were hammered with the anti-terrorism-related charge of identity theft, forced to plead guilty to felony fraud, jailed up to a year at public expense and deported without an immigration hearing,” the author recounted in his current op-ed.

“Hundreds of families were left to starve and the Postville economy was devastated. The seven-day ‘fast-track’ proceedings, with one lawyer for every 20 defendants, were a mockery of due process, condemned nationally by the legal community and slammed at a congressional hearing.”

Camayd-Freixas said that the fast-track, “assembly-line” justice–where defendants’ individual circumstances were completely disregarded–stands out as the only “mass felony prosecution” in the history of modern democracy.”

A FEDERAL JUDGE MUST BE HELD TO A HIGHER STANDARD

While many denounced the proceedings as a travesty of justice, then Assistant U.S. Attorney Rose called it “a ton of good work,” praising the “tireless” efforts of those who took part in the proceedings.

But Camayd-Freixas noted that her serious errors of judgment in the Postville prosecutions cast a shadow over her fitness for the federal bench.

“A federal judge must be held to a higher standard of fairness, impartiality and understanding of the law,” he wrote, noting egregious breaches of all three credentials in the Assistant U.S. Attorney’s conduct.

He harshly criticized Rose and her colleagues for using “the identify theft” charge against immigrants who were ignorant of the Social Security system, and had no clue their false papers contained identification numbers belonging to another person.

Holding the “aggravated identity theft” charge over the heads of the arrested workers drove most of them, guilty or not, to waive the right to trial or immigration hearing, Camayd-Freixas noted. In addition, it coerced them to plead guilty to felony charges that landed them in jail for five months, followed by automatic deportation.

The vast majority of this group had no criminal history. If they were not going to be allowed to stay here legally, shouldn’t they have been sent back immediately to rejoin their impoverished families in Guatemala and Mexico?

What purpose was served by jailing them at taxpayers’ expense, while their families back home starved?

The Postville strategy, using the identity theft charge as a weapon to coerce guilty pleas, backfired two years later. That’s when the Supreme Court ruled in an unrelated case that the charge was inapplicable in cases where the defendant did not knowingly steal the identity of a specific individual.

Assistant U.S. Attorney Stephanie Rose and Chief Judge Linda Reade, it now became clear, had misapplied the law in the hundreds of Postville prosecutions they oversaw.

“This landmark 9-0 decision overturned three appellate courts, including the 8th Circuit, and thousands of cases,” wrote Camayd-Freixas. “So much for Rose’s ‘ton of good work’.

“The Supreme Court ruling,” he said, “showed how easily a biased interpretation of the law can put politics and prejudice before justice.”

The author noted that Stephanie Rose’s nomination had been sponsored by Iowa Senator Tom Harkins, the same person who had nominated her for the U.S. Attorney position a year after the raid. [At that time of the raid, she had been third in the chain of command in the U.S. Attorney’s Office.]

Facing down criticism of his nominee for her actions in the Postville tragedy, Harkins claimed Rose had a very minor role in the operation and was just following orders.

That image contrasts sharply with an eye-witness description of a private meeting that took place at the United States District Courthouse in Cedar Rapids, Iowa, on May 12, 2008, as the ICE raid was underway.

The eye-witness report was written by Rockne Cole of Iowa City, one of the public defenders summoned to the meeting along with instructions “not to tell anyone” about it.

Cole addressed his July 2008 letter to Rep. Zoe Lofgren who chaired the congressional committee scrutinizing the raid and the legal proceedings that followed. Parts of his letter were printed in the New York Times.

A HANDBOOK FOR HOW TO GET YOUR CLIENT JAILED AND DEPORTED

Cole wrote of his astonishment at the meeting’s agenda, which he summed up as a legal scheme in which “a court-appointed attorney’s role was to act as a ‘guilty-plea processing clerk’, serving only to expedite the mass waiver of rights.”

“It was like a handbook on how to get your client jailed and deported,” he told this writer.

In Cole’s report, far from playing a minimalist role in the proceedings, Rose appeared to be a key player. She chaired the meeting, describing at length the well-crafted strategy by which the attorneys were to guide their clients into waiving their rights to a trial or immigration hearing, and to agree to plea deals that required 5 months of jail time and deportation.

“Assistant U.S. Attorney Rose began the meeting by scanning the audience for media officials…. She then began the presentation,” Cole wrote. He said Rose advised the attorneys they would be handling a large number of defendants at one time. [The number started out at 10 but later jumped to a staggering 20.]

After a court clerk handed out to all the attorneys “guilty plea handbooks,” Rose launched into a description of the various plea deals being offered to the defendants, all of which presumed guilt of a felony crime.

There was no allowance in the Rose’s “representation plan” for a plea of innocence, Cole told the congressional committee in his letter.

“What I found most astonishing,” he said, “is that apparently Chief Judge Reade had already ratified these deals prior to one lawyer even talking to his or her client.”

Cole said that he concluded from what he heard at the meeting that Judge Reade [who was present at the meeting] and the United States Attorney’s Office coordinated the mass detention; roundup; representation plan; plea deals and sentencings, before he or any of the attorneys could speak to their clients.

“I hope I am wrong about that inference,” Cole wrote, “but the overwhelming facts suggest a breathtaking level of coordination between the United States District Court Judge and the Department of Justice, [i.e. between Judge Reade and Assistant U.S. Attorney Rose–ed.].

Cole said he realized he could not be part of what he saw as a legalized assault on human rights, and walked out in disgust.

“I nevertheless strongly encourage the Committee to keep an open mind, and afford all officials involved a fair hearing, which unfortunately was not given to the defendants in Postville,” Cole concluded.

Almost four years later, on the eve of the Senate confirmation hearings for President Obama’s nominees that will decide Rose’s future, an op-ed appeared by Cole appeared in the Iowa Gazette.

“On May 12, 2008, prosecutor Stephanie Rose and her colleagues in the Northern District of Iowa brutally removed a large ethnic group from Postville through the infamous immigration raid. President Obama has now nominated Rose to be a federal judge for the Southern District of Iowa,” Cole began.

“Neither Rose nor any of her colleagues have ever acknowledged the slightest injustice arising from their brutal tactics,” Cole wrote. “To the contrary, she has celebrated the [government] operation.”

COULD NOT KEEP SILENT

Still practicing in Iowa City, Cole said he could not keep silent as he watched Stephanie Rose “about to ascend to lifetime employment on the backs of the “huddled masses.” He could not forget the “injustice” and “brutality” inflicted on the hundreds of defendants “by Rose and her colleagues.”

Aware that he has probably endangered his career by speaking out, Cole told this writer he “would rather stand up against this injustice than capitulate to further my own career, as [Rose] has done. It is sickening what happened to the workers and to Sholom Rubashkin, and they are getting away with it.”

“Since the raid,” he wrote in the Gazette, “I have wondered why so many of the legal elite have walked in lock-step supporting Rose and her colleagues while turning their backs on [the victims]. Perhaps, I will never have that question answered.

“But I do know one thing for sure: I will never forget what happened to Rosanna Meijia who was one of the ‘cattle’ rounded up and brought to the Cattle Congress…. and every person who, like her, was stripped of dignity.”

“I will never endorse any person who, after four years of reflection, cannot recognize the basic inhumanity that was shown on that day of infamy.

“President Obama,” he wrote, “shame on you for validating this injustice by nominating Stephanie Rose to be a U.S. District Court judge for the Southern District of Iowa.”