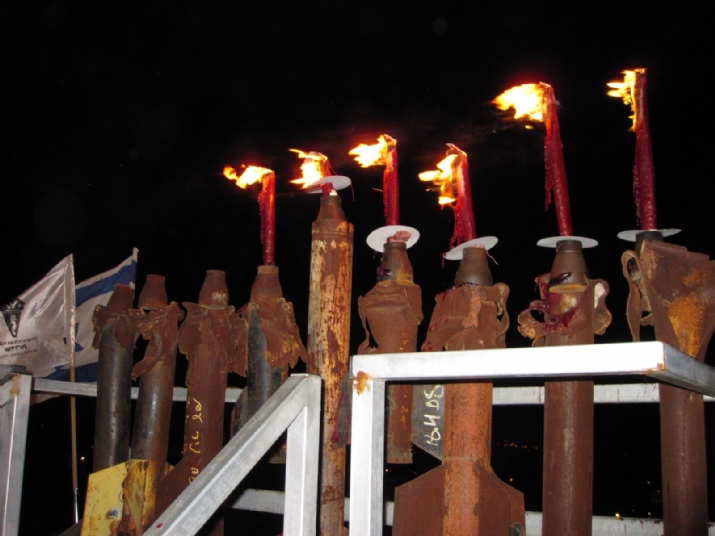 Last Sunday evening, the fifth night of Chanukah was marked by the lighting of one of the most unusual menorahs ever conceived, although, as we''''ll see, the concept it represented may reach back to the very first menorah lit by the Chashmonaim as they rededicated the Beis Hamikdosh. To avoid keeping readers in suspense, here is the gist of the invitation to the lighting which would be held on the roof of the Sderot Hesder Yeshivah. The purpose of the evening was to "help comfort the families of the those soldiers lost in Operation ''''Cast Lead'''' and to join the yeshiva for the lighting of the world''''s largest ''''Kassam Rocket Menorah.''''"

You read that right. Israel has found a paradoxical use for the thousands of Kassam rockets flung over its borders in the past few years – to fashion them into admittedly ugly menorahs in the symbolic hope of the novi Yeshayahu that flying projectiles such as these may one day be melted down into agricultural equipment.

The Kassam menorah of this evening was unique, however, as it was not only the largest of its kind every fused together, but would also serve as a vehicle of gratitude for the yeshiva of Sderot, a town that lies less than a mile from the Gaza border. When illuminated on the yeshiva’s roof, the menorah is visible throughout the town of Sderot and even in Gaza. A statement released by the yeshiva stated that, “The menorah illuminates a message of perseverance despite our enemy’s futile attempts to turn Sderot into a ghost town by firing over 10,000 rockets into Sderot and the Western Negev since 2001.”

Yated spoke to a representative of the yeshiva and found out that life in Sderot has indeed changed drastically since the last soldier returned from operation Cast Lead of two years ago. Before the Cast Lead operation, the town suffered from about fifty Kassams a week, whereas now, only two to three rockets a week are shot off on average, and in addition, Hamas is concentrating not only Sderot but also on surrounding settlements and towns such as the Eshkol Settlements bloc, Eshkol, and the major city of Ashkelon. Because of this lower rate and concentration of fire, two weeks can pass between Kassam blasts, and having got used to the rapid rate of fire before the war, the people can take a Kassam or two per month in stride.

Rosh Yeshiva, Rav David Fendel (formerly of New York) said the purpose of the evening was “to be able to recognize the extreme bravery of our young soldiers who fell in battle defending the state of Israel. We hope that we can bring some comfort to the families by broadcasting loudly that their sons didn’t die in vain. Our menorah, a holy tool made out of the weapons of our enemies, is the ultimate expression of our belief that the Jews of Sderot are here to stay.”

Later, he would explain why it was so important to gather the bereaved parents of soldiers in expression of the town and yeshivah’s gratitude. Just as we need to express our wants and our praise of Hashem in words, so it was fitting to express the yeshivah’s gratitude to those who had fallen so that it could continue its holy work.

“We need to express what we feel,” he said. “For a long time we have felt grateful and spiritually bound to all the great, joyful Torah that the parents see here, this is absolutely in the merit of your sons. We know this, and we know that you have paid the greatest price.”

On the night of the lighting, about five hundred guests climbed up to the yeshivah’s roof which is no less unique than the Kassam menorah. Unlike the days before and during operation Cast Lead when the yeshiva was precariously housed in caravans, it is now housed in the sole yeshiva worldwide with a rocket proof roof and walls. This way, the bochurim can concentrate on their sugyas without being nervous that unwelcome guests might “drop in.” Even the windows facing Gaza are made of thick, tough, rocket proof glass at the insistence of the Israeli army.

The first candle, “the light of Torah,” was lit by Rav Yisroel Lau (Previous Ashkenazi Chief Rabbi of Israel, Chief Rabbi of Tel Aviv and the Chairman of Yad Vashem).

In his droshoh later, he found a comparison between the Kassam menorah and the statement of Chazal that the first menorah lit by the Chashmonaim was made of bars of iron, presumably used as spear heads. “

Did they not find anything except spears that are used to kill people for the menorah,” he asked. “Symbolically, they were making the statement that even destructive spears can become a source of light, For a mitzvah is a lamp and Torah is light.

The third candle, “the light of comfort for the bereaved families of Sderot” was lit by Yonoson Abukasis, the father of Ella Abukasis, who was killed by a Kassam rocket while protecting her young brother, while the 5th candle, “the light of remembrance,” was lit by representatives of one of the bereaved families of the “Cast Lead” campaign of two years ago.

Another guest speaker, Major-General Ofer Levy, Northern division commander in the Gaza brigade, could only be expected to say something military and something military he said, expressing his fear that even though the Arabs, despite their boasting, knew they had been trounced.

“But I would be happier if they thought they had won,” he said, “as now they are learning from their mistakes and getting ready for the next round.”

At the conclusion of the lighting, as the yeshiva bochurim danced beneath the five flickering lights of the menorah, parents and guests alike felt that the ten commemorated soldiers were temporarily linked with those they had died for.