A Look at the Shiloh Winery 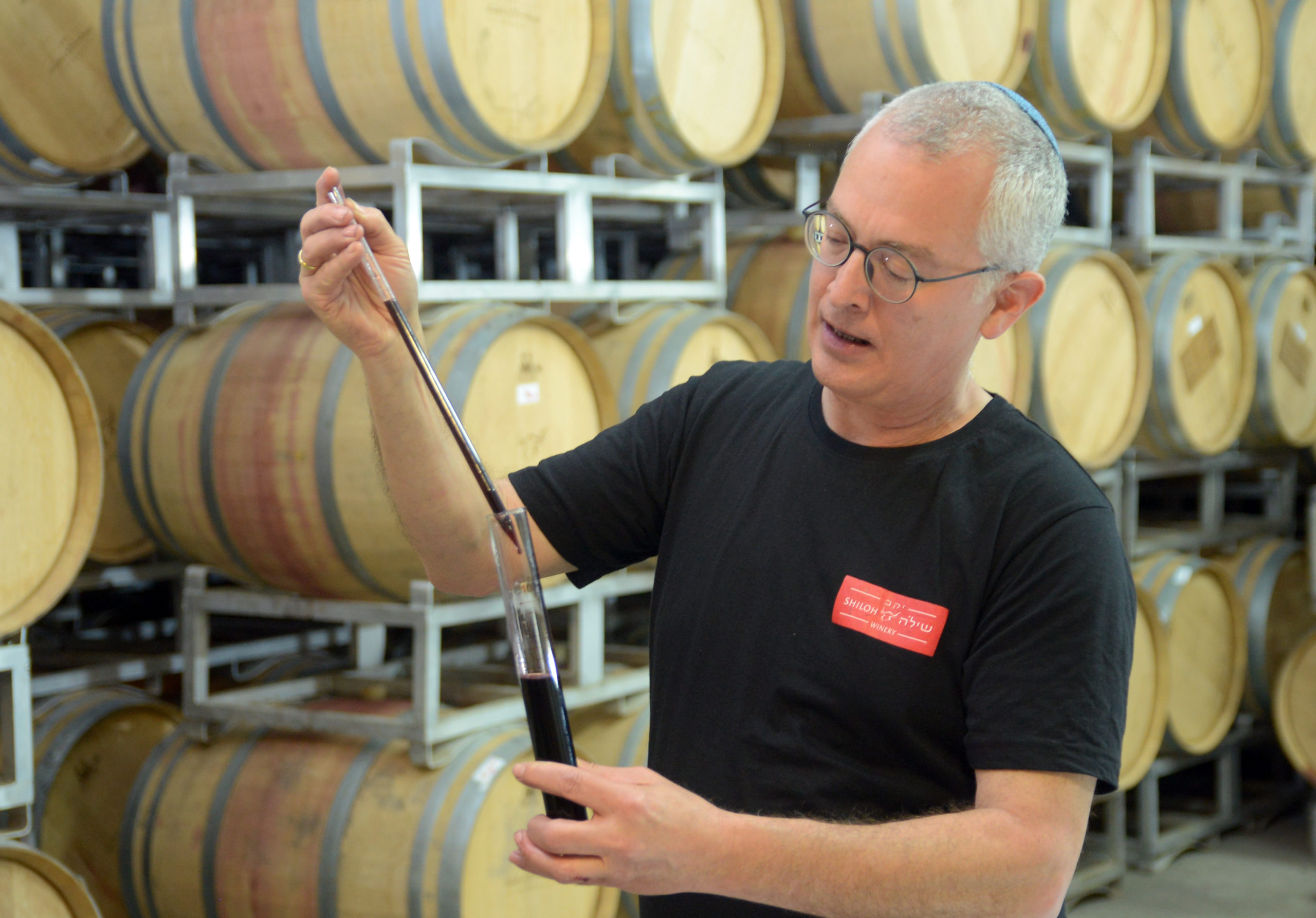 “There are a lot of natural advantages for making great wine in Eretz Yisrael,” says Amichai Lourie, winemaker at the popular and successful Shiloh Winery, in Israel’s Shomron (Samaria) region.

The Shiloh Winery has an impressive collection of international wine medals, and typically earns high wine-critic ratings and related accolades every year from esteemed wine publications like Decanter, Robert Parker’s the Wine Advocate, The Wine Enthusiast, and the like. Lourie’s real passion, however, is ignited by discussing the Land of Israel itself, and both the ancient and contemporary Jewish cultivation of wine there.

“One of my goals,” says Lourie, “is to connect people to Eretz Yisrael through Shiloh wines.” Whenever people compliment Shiloh wines or ask how Shiloh consistently impresses with its quality and distinctive wines, he always makes a point to “give the credit to Eretz Yisrael.” He likens it to his personal shlichus of Jewish outreach.

Simply put, Amichai Lourie absolutely loves making wine in Shiloh from grapes cultivated in Yehuda and Shomron, the Biblical heartland of Israel. He also loves sharing with kosher wine consumers not only Shiloh’s wines, but also his passion for making kosher wine in Shiloh. This is a passion he shares with Dr. Mayer Chomer, the winery’s owner and founder.

A Mexican lawyer with a PhD in criminal law from Spain who had immigrated to Israel, Chomer was imbued with exactly this same religious impulse when he established the Shiloh Winery back in 2005.

“The thought of earning a parnassah playing a role in the geula through the cultivation of wine,” recalls Chomer, “[and thereby also] being in a position to fulfill all the related mitzvos hatluyos ba’aretz [the commandments connected to the Land of Israel], producing wines that fellow Jews will be making brachos [blessings] over, and using for kiddush on Shabbos and Yomim Tovim…was very enticing.”

Despite this religious zeal, the Shiloh Winery was, and is, established as a business, to be sure. Its primary aim on a day-to-day basis remains firmly commercial. From its earliest conception, however, Chomer’s vision was also tightly bound to notions of religious fulfillment. So began an expensive and slow-going investment in the Shiloh Winery—but he still needed a fulltime winemaker to help make it work optimally. It was at this critical juncture that he chanced to meet Amichai Lourie, a guy who at that time worked in construction—building things and renovating houses, producing wines strictly as a hobby—an astonishingly passionate hobby, up to 2,000 bottles annually(!), but still just an avocation.

Attending a wine event at Lourie’s home in Ma’aleh Levonah, a town nearby modern-day Shiloh, Chomer was struck by both the man and his wines.

Lapsing into a happy reverie, Chomer vividly recalled the evening: “When I saw that guy [Lourie] serving the meal, cutting the meat, attending to guests, serving the wines, talking about life, the delicious food, and his excellent wines—I was struck by his dedication, his humility, his exuberance; demanding so much of himself, and giving it his all! Imbuing every action with purpose and an infectious passion for doing things right(!)—it was almost overwhelming. Also, his wine was, if not the best wine ever, certainly some of the best wine at the table…and he was really giving the evening his all. Not showing off, but simply being himself.”

Recognizing talent and a certain kindred spirit in Lourie, Chomer seized the opportunity to recruit him. In Lourie’s often repeated retelling, Chomer asked him: “Why don’t you turn your hobby into a profession?” Chomer’s pitch worked.

“I foolishly thought,” recounts Lourie, “I was going to go from working very hard in renovations to an easier life making wine. I just didn’t know how hard and demanding and, really, overwhelming making wine in large scale could be—especially if you want to do it right.”

Chomer attributes much of Lourie’s success to his dogged determination to give every endeavor his all, demanding and effectively producing as much dedication from others in return. “In Mexico,” says Chomer, “we have the expression, el león cree que todos son de su condición [roughly: the lion thinks that we’re all like him]—and Amichai is very much like this; he comes to everything like a lion and expects everyone else to be a lion too.”

The Chomer-Lourie team quickly proved, and continues to prove, to be a fabulous partnership for both men.

While Lourie acknowledges a richly deserved measure of pride in his talents and accomplishments, he continues to chalk the winery’s successes up, first and foremost, to providence.

“We are living in a country that’s blessed,” Lourie says simply, “so you can feel the blessing in the wines; there is no way around that—our making wine here in Israel has the explicit endorsement and backing of HaKadosh Baruch Hu !”

As Lourie explains, the Gemara says [in Sanhedrin, 98a] that a clear sign of the redemption of the Jewish people is that the trees of the Land of Israel will start growing again, and that the re-flourishing of the land is an integral part of the redemption process. Yechezkel Hanavi declared: “But you, O mountains of Israel, will give forth your branch and bear your fruit for My people Israel, for they are soon to come (Yechezkel 36:8).” Yesha’ayahu Hanavi said: “For the Lord will comfort Zion… He will make her wilderness like Eden and her wasteland like a garden of the Lord… (51:3)”

What’s more, according to Lourie, the Amotz Hanavi says this rejuvenation of the land for the benefit of the Jewish people will be the result of the labor of those returning Jews: “Behold, days are coming — the word of the Lord … I will return the captivity of My people Israel, and they will rebuild desolate cities and settle them; they will plant vineyards and drink their wine; they will cultivate gardens and eat their fruits (9:13-15).” So, while the land of Israel was desolate for others, it blooms for the Jewish people returning from exile to redeem the land.

The location matters not just in terms of Israel’s terroir, but because of its history. The Shiloh Winery is situated in the modern town of Shiloh, very near the archaeological site of Ancient Shiloh, in the very heart of Yehuda and Shomron. Shiloh is on the central mountain ridge, overlooking Israel’s coastal plain to the west and the Jordan Valley to the east.

The Biblical Shiloh is the heart of the earliest establishment of Jewish life in Ancient Israel. After the 40 years of wandering in the desert, when the Jewish people finally entered Israel and settled the land over 3,300 years ago, Shiloh was established as the initial capital of Jewish sovereignty. As the epicenter of Jewish life then, it was also a center of wine cultivation. The grape is one of the shivas haminim, so wine cultivation quickly became a primary occupation, and formed the backbone of the economy.

Before there was Yerushalaim, Shiloh was home to the Mishkan and the Aron for 369 years. Before the Temple in Yerushalaim, Shiloh became the first place of Aliya laregel, where Jews came to serve Hashem, bring sacrifices, and celebrate the festivals and holidays. Wines from around Shiloh were almost certainly used in the Mishkan service and poured as libations over the mizbeach (Nisuch Hayayin) for over three centuries.

The archeological record testifies to the sheer abundance of, and importance attached to, wine cultivation in Shiloh and its environs. “You can find dozens of ancient wine presses and related evidence of wine cultivation in Shiloh, and throughout the area,” notes Lourie. “We actually found several such wine presses directly in our vineyards; one row even stops short, as we had to factor in a gap to work around the archeological find.”

What’s more, notes Chomer, the area is particularly blessed. “There’s an incredible peirush Rashi on the parsha of the Torah (Devarim 33:13) where Yaakov gave over Shechem and the area of Shiloh to Yosef as an extra gift for him.” The verse states, “And of Yosef he said: ‘His land shall be blessed by the Lord, with the sweetness of the heavens with dew, and with the deep that lies below.’” Rashi comments on this: “For throughout the inheritance of all the tribes, there was no land more full of goodness than Yosef’s land.” For both Chomer and Lourie, such citation simply underscores objective reality. “Since then, as for today,” says Chomer, “wine cultivation was an ancient art in Shiloh, and is flourishing once again.”

The Shiloh Winery began producing around 20,000 bottles annually under the Shor series [Hebrew for ‘bull’ or ‘ox” after the symbol of Shevet Ephraim, the son of Yosef, to whom the area was bequeathed). Today, Shiloh produces over 250,000 bottles annually: it makes two top-end flagship wines—Mosaic and Mosaic Exclusive red blends, and six Secret Reserve varietal wines (this is based on a motif familiar to religious Jews—the word ‘secret’ in Hebrew is ‘sod’, which carries the same numerical value as the Hebrew word ‘yayin’ [wine], from which comes the Talmudic proverb “when wine comes in, secrets come out…”). Shiloh produces three Shor varietal red wines, as well as two varietal whites and a rose. They also produce two special red blended wines under the Legend label. Finally, Shiloh also produces an entry level red blend called Privilege.

The name of the entry level offering nicely encapsulates up the Shiloh Winery in nutshell. As Lourie explains: “It’s an amazing privilege to work the land of Israel, it is an amazing privilege to plant the vines and knowing that the nevuos are coming true, and when you respect the vines themselves, then you get back. It’s a spiritual connection of a person that makes wine to the land itself, to the vines—this unleashes tremendous potential for greatness. It is our responsibility to not mess it up.” Indeed.

Shiloh’s wines are imported and distributed in the US by the Herzog family’s Royal Wine Corp. of Bayonne, NJ. They are well worth seeking out.

Amichai Lourie, Shiloh’s winemaker, makes himself available to all inquiries about Shiloh Winery and his wines. You may reach out to Amichai at: