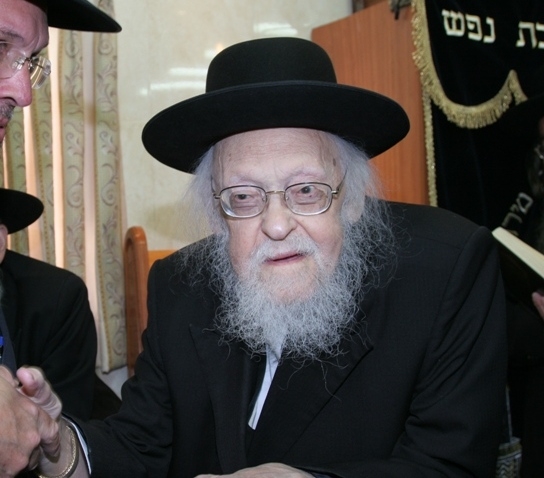 On this daf, we find that it is forbidden to leave food on a fire that was not covered.

One fairly uneducated man would always place a blech on the fire before putting his cholent on the covered stove to continue cooking. A friend came to visit for Shabbos and asked what the precise function of the blech was. The baal habayis was unsure. “All I know is that one cannot place a pot on the fire – even from before Shabbos – unless the fire is covered.”

When the guest asked a talmid chochom for the reasoning behind this after explaining that his host had been unsure, the learned man was shocked. “We do this as a way of diminishing the flames to remind us not to turn the heat up on Shabbos. Unfortunately, I am not certain that this will help if one doesn’t understand how it works!” he added.

When this question was presented to Rav Yosef Shalom Elyashiv zt”l, he ruled that it was permitted for the unlearned man to make use of the blech. “Even if a person is unsure how a blech works, as long as he knows that the food may not be left on the fire without a blech, this is enough. The reason is that he did cool off the fire with the blech and his intention is to make the stovetop permitted so that he can leave food on it on Shabbos.

“If one were to put a blech on merely due to habit without knowing that doing so permits leaving food on the fire on Shabbos, however, it is as if he left the food on an uncovered fire” (Shvus Yitzchok, Part II, p. 21).

One non-Jewish woman would help out in the Gateshead Yeshiva throughout the entire week, including Shabbos. She was a good-hearted woman, sensitive to the needs of the bochurim under her charge.

One Shabbos, she noticed that the hot water urn had a bit less water than what was needed. The bochurim had been drinking more teas than usual and, with Shabbos just beginning, the water was sure to run out. Without a moment’s thought, she refilled the urn with water so there would be enough for much-needed tea.

As we find on this daf, even if a Jew purposely leaves a pot to cook on an uncovered fire from before Shabbos, the contents are forbidden. The Rama clearly states that one may not partake of food or drink that a non-Jew cooked on Shabbos, especially if this was done expressly for the benefit of the Jew. Presumably, the water was prohibited.

Rav Leib Gurwicz zt”l, rosh yeshiva of Gatehead Yeshiva, asked how much water was added. Was there sixty times what was already in the huge urn? When it became clear that there was, he permitted the water.

His students asked why this was allowed. “But isn’t this water a dovor sheyeish lo matirin, something which will be permitted after Shabbos? Such a substance is never nullified when mixed b’mino,in the same substance which is permitted.”

The rosh yeshiva immediately replied that there was a difference. “When the water was poured into the urn, it was permitted. And if the urn had been removed from the fire immediately, the water would have been permitted, since it is not yet considered cooked. So when was the water prohibited? Before it was cooked, it was permitted. Until it cooked, it was permitted. And by the time it cooked, it was already botul. We find a case of a barrel of grape juice into which one added grapes that leak juice into the grape juice. The Mordechai rules in this case that the juice that goes into the grape juice is botul. Even though juice that emerged from grapes on Shabbos is forbidden, since the grapes are in a barrel and the juice which was in them was only recognizable when it was already nullified in the grape juice, it is botul, and this is how the Mishnah Berurah rules in 320:14. The same is true of the comparatively small amount of water added to the yeshiva‘s urn” (Chashukei Chemed, Shabbos, p. 227-228).

Shabbos 39: Heated by the Sun

In the second version of Shemiras Shabbos Kehilchosah, Rav Shlomo Zalman rules that it is better to avoid using water heated in a solar water heater, but he still maintains that it is halachically permitted.

When Rav Yosef Shalom Elyashiv zt”l was consulted on this matter, he disagreed with Rav Shlomo Zalman’s analysis. “Although the solar panels do not touch the water, they certainly are the factor that heats the water, since without them the water would never get hot enough. It is therefore clear that a solar water heater is toldos hachamah, like cooking an egg on a hot rock which was warmed by the sun, which is forbidden. Claiming that the water that comes out of the tap is water that was already heated, and that the cold water that enters the water heater is a groma, indirect, unintentional result of turning on the water is incorrect. Since this is how the water heater is set up to work, the cold water that enters the water heater and is cooked on Shabbos is the same as water cooked with toldos chamah by the one who turns on the water” (Shemiras Shabbos Kehilchosah,Shvus Yitzchak, Part VI, p. 297-298).

Shabbos 40: The Heat of the Yomim Nora’im

The rov of Piltz would learn Maseches Shabbos every day. One Yom Kippur, he was learning Shabbos, this time with one of the sons of the Imrei Emes of Gur. When the Imrei Emes noticed that they were learning Perek Kirah, he looked pleased. “You know that this chapter actually has a connection to Yom Kippur,” he said.

“I am referring to Rashi on daf Mem amud bais. Rashi explains that the language of yad soledes bo alludes to one whose hand is drawn back after touching something hot in fear of being burnt. Rashi proves that this is the meaning from a verse in Iyov: ‘Ve’asaldah bechilah.’ Rashi explains: ‘I will worry in trembling’ – and remove my complaint out of concern from the Yom Hadin if I knew that my passing is near and Hashem will not have mercy.

“The very name kirah (kuf,yud, reish, hey)is an acronym for Rosh Hashanah and Yom Kippur. It appears that the connection between the two is that we can compare Rosh Hashanah and Yom Kippur to an oven. Just like an oven cooks whatever is placed on it when hot, the Yomim Noraim whiten any person who is concerned about the result of his judgment on these most holy days” (Daf Al HaDaf, Shabbos, Part I, p. 222-223).

When the Imrei Chaim zt”l visited the Klausenberger Rebbe zt”l, the latter made a very interesting point. “It certainly appears strange that so many apparently unaffiliated Jews, certainly very far from the holiness of Rav Shimon bar Yochai, flock to his grave for Lag Ba’omer.”

The Rebbe offered a very satisfying answer to this question, “On Shabbos 41, we find that Rav Shimon bar Yochai holds that a dovor she’eino miskavein, something done without kavanah,is permitted. These Jews are an aspect of dovor she’eino miskavein. They don’t mean to sin, but they don’t know better. Since Rav Shimon bar Yochai ismelamed zechus on them, they are attracted to him.”

The Imrei Chaim agreed to this, pointing out, “They are drawn to Rav Shimon bar Yochai as metal is attracted to a magnet.”

Dealing with dangerously ill people is often traumatic. Trying to help one in this delicate state can be even more harrowing and complex when a crisis occurs on Shabbos.

One dangerously ill person needed light on Shabbos. His caretaker knew that the neighbor had an excellent light that could be moved from his home to the ill person’s house, but it was late at night and he was afraid to wake the neighbor from his sleep. It was certainly not dangerous for the sick man to wait until the lamp was moved.

Feeling as though he had no choice, he knocked on the neighbor’s door, waking him from a deep sleep, and received the required lamp. But the neighbor expressed doubt whether he had been required to wake him. “After all, the man is dangerously ill and you are allowed to do melachah for him,” the neighbor said.

When this question was presented to Rav Pinchos Epstein zt”l, he confirmed that the caretaker had acted correctly. “The neighbor is also required to do his part to ensure that there is as little chillul Shabbos as possible…”

When Rav Shlomo Zalman Auerbach zt”l was consulted, he disagreed. “This is clear from Shabbos 42. There we find that one who finds a burning coal in the public domain can extinguish it to protect people from danger. Why doesn’t the Gemara say that,

if possible, he should stand near the coal or metal, or delegate someone else to remain there, and warn people to avoid extinguishing it? Clearly, as long as one is sincere, he need not take unusual efforts that will cause undue pain to avoid chilul Shabbos at a time when he is permitted to extinguish or light a fire” (Minchas Shlomo Part I, #7, Shemiras Shabbos Kehilchosah, 32:62).

Rav Aharon Leider gave an inspiring talk about how we should greet Shabbos. “In Sidduro Shel Shabbos, we find that one should prepare himself on Erev Shabbos by clearing a space in his heart for the holiness of Shabbos to enter.

“This may explain a statement on Shabbos 43. There we find that if something was muktzah during bein hashemashos, it remains that way the entire Shabbos, even if the circumstance that caused it to be muktzah was removed during the course of the day. We can explain that one who is muktzah from before Shabbos because he did not clear space for Shabbos through teshuvah remains muktzah for the entire Shabbos. Such a person receives much less of the neshamah yeseirah than one who prepared himself with teshuvah” (Nitei Eishel, Part I, p. 384).