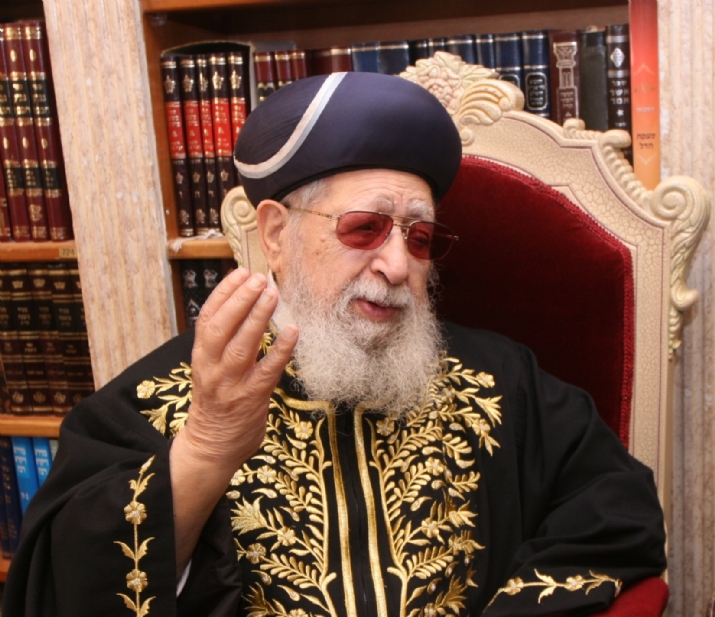 Before the Chazon Ish immigrated to Eretz Yisroel, he asked the bais din in Vilna to issue an important ruling regarding bris milah. “Please inform people that there is an essential difference between the bris of one who was born in the usual manner and one who was born without conferring defilement on his mother. A natural birth requires a bris on the eighth day, even if the baby was born on Shabbos. The bris of a baby born in a manner that does not confer impurity on his mother – such as a Cesarean section – may not be performed on Shabbos. Although the usual rule is that a bris bizmano, on the eighth day, is performed on Shabbos, the situation that I have described serves as an exception, as we find on Shabbos 135. Although such operations used to be very rare, in our times this has changed. Since it is now normal for a baby to be born via Cesarean section, people need to be informed of this important difference. It is possible that people are unaware of this halacha in Eretz Yisroelas well. I have complete confidence that the bais din will investigate thoroughly and uphold this halacha wherever necessary.”

On another occasion, the Chazon Ish strengthened this halacha in another manner. “All mohalim should be made aware that it is forbidden to perform a bris on Shabbos if the baby was born by Cesarean section. Anytime a mohel receives a request to perform a bris on Shabbos, he must clarify that the baby was born in the usual manner” (Teshuvos Vehanhagos HaChazon Ish #50; Sefer Chazon Ish, Yoreh De’ah, 154:4).

This daf continues discussing the halachos of making a bris on Shabbos.

A man who was a baal teshuvah was completely flummoxed. His firstborn son had been born naturally on Shabbos and he had looked forward to inviting one of the gedolei hador to be the sandek. To his dismay, his father, who was a mechallel Shabbos, asked to be sandek. “I know you want a distinguished sage to do this, but this I promise you: If you make me sandek this Shabbos, I will keep the laws of Shabbos completely that week.”

The new fatherhad heard that a sandek has a huge effect on the development of a baby. At the same time, perhaps he was obligated by halacha to give this honor to his father to prevent him from being mechallel Shabbos, if only for one week.

When this question was presented to Rav Yosef Shalom Elyashiv zt”l, he ruled that the non-observant father should indeed serve as sandek. “It is obvious that he should allow his father to be sandek in this instance if by doing so he is saving his father from a prohibition which is chayov sekilah, even for one week” (Chashukei Chemed, Pesachim, p. 493).

The bracha bestowed at a bris milah is certainly singular: “Just as he has entered into the bris, so may he enter into Torah, chupah and good deeds.”This bracha is found on this daf and is the custom, but many probably wonder exactly what it means.

Rav Yaakov Kamenetsky zt”l explained: “The halacha is that it is forbidden to circumcise a child who is not completely healthy. This, then, is the meaning of this bracha. We say that just as he has entered the bris in robust health, so should he enter into Torah study, his chupah, and doing good deeds.”

Rav Shloimke of Zvhil zt”l asked a different question about this nusach: “Why does chupah precede good deeds? After all, every male surely does many good deeds before he marries.

“The answer is that the good deeds referred to here are not conventional mitzvos at all. When we bless an eight-day-old child with good deeds after his chuppah, we mean progeny, who are also called one’s ‘handiwork,’ as we find in Shabbos 22. We bless the child even now that he father maasim tovim – children who impart Yiddishe nachas to their parents” (B’Mechitzas Rabbeinu, p. 29; Yesod Tzaddik, p. 281).

“This is why the first letters of the words of the verse, ‘Raglei chassidov yishmor – He will guard the feet of His pious ones,’ has the same numerical value as the word Zohar. This teaches that through learning Zohar, one is protected, since this sefer purifies the soul.”

The Ramchal makes a similar observation. “At the End of Days, we will once again be faced with a Mabul. Not a physical flood, but an attack on everything holy. The teivah that will protect us in those times is the holy Zohar. It is only through learning such deep concepts that one is inoculated from the negative influences that will abound.”

Many sources explain that learning seforim based on the Zohar and Arizal, like much of the Ramchal, Maharal, Nefesh Hachaim and Tanya, is how one affords this shemirah in our generation. After all, these works teach us the practical message from the Zohar, bringing it down to a place where we can understand and internalize it.

Nevertheless, we should not forget the importance of learning the Zohar itself. As the Chazon Ish told Rav Shmuel Halevi Wosner, “If one learns Zohar to attain yiras Shomayim, it is laudable. There is no better way to attain true yiras Shomayim than studying the moving language of the Zohar” (Likkutei Moharan; Tiferes Shlomo, Part II, p. 285; Adir Bamarom; Maseh Ish).

SHABBOS139:  THE IGNORANT AND THE UNWORTHY

“We can understand this apparent contradiction when we consider the words of the Maharsha in Sotah 40. He explains there that when baalei batim are the ones who decide which scholar to appoint, they do not choose the correct person. If the ignorant are the ones to decide which person will preside as judge, they are prone to appoint a worldly person with much charm but who is not fitting to serve in such a position of responsibility.

“In light of this, we can explain that there is no contradiction at all. Yes, it is the unworthy who are at fault. They fail to lead the nation to follow halacha and turn to Hashem. But it is the ignorant who appoint such dayanim who share the blame. If only those who are truly worthy would appoint the judges, they would be fitting, as the Maharsha points out. Leaders who are fitting will bring us to teshuvah and save us from punishment” (Meir Einei Yisroel, Part III, p. 716).

A family was setting their Shabbos table when they noticed something really out of place. Apparently, one of the children had moved a hammer onto a small table next to the sofa. When the father returned home from shul, he was unsure as to whether he was permitted to move it. After all, he didn’t really need to use the table, so the general rule that we find on thisdaf of being able to move a kli shemelachto l’issur when one needs its place did not apply. He did not require any permitted use of the hammer either, and just pushing it with an elbow onto the floor might ruin his tiles. Yet, he felt embarrassed that his guests would come and see such an obviously muktzah item out in the open on Shabbos.

To ease his discomfort, he tried to consider the man who went to the Chazon Ish with a huge wine stain on his otherwise spotless suit jacket. “How can you say it is forbidden to clean this off? This is my only jacket and it is a public humiliation wherever I go!”

The Chazon Ish gave the man another way to look at the problem: “You should think of it as a badge of honor. Like a beautiful adornment which declares to the world that you will not clean your suit because you keep Shabbos!”

When this question was presented to Rav Yosef Shalom Elyashiv, he issued a clear and surprising ruling: “Although you do not need the place in the conventional sense, having it out in the open will embarrass you. That is also called l’tzorech mekomo. You do need the space. You need it cleared away so that you will not feel ashamed” (Piskei Halachos p. 27).

Thisdaf discusses the halachos of muktzah.

The study of halacha can be quite complex. It is often no simple matter to determine what is the right way to act and how to comport oneself lemaaseh. What appears permitted may be prohibited and what we are sure is problematic may well be the proper way to act. Although Rabi Shimon bar Yochai insisted that the Torah would not be forgotten, the Gemara there adds that the halacha will nevertheless be unclear at times. The Tikkunei Zohar points out that if we had not sinned with the Golden Calf, halacha would have been something we could easily intuit. It is only because we sinned that figuring out what is the correct way to act is so difficult.

One family was very proud of their collection of decorative plates of blue glass inlaid with gold. One Shabbos, a guest was admiring them when he tripped and a plate began to fall to the ground. Almost without thinking, the owner of the plate leapt towards it and caught it right before it hit the floor. He immediately replaced it on the shelf where it usually stood, but then had second thoughts. After all, the family would surely never use these valuable plates for any purpose. They were each works of art. So, obviously, they were considered objects that are muktzah machmas chisaron kis, untouchable because of their value as ornaments. It was surely forbidden for him to hold it or replace it on the shelf. Perhaps he needed to do some serious teshuvah for having put his desire to save a valuable object ahead of his concern for shemiras Shabbos.

When this question was presented to Rav Ovadia Yosef, he ruled that according to all authorities it was permitted to save such a plate. “Since the objects of art were in your dining room, where the entire family is found, you were definitely allowed to save the plate, even lechatchilah. If it had broken, you would have had to be in contact with it in order to clean up the shards, because they are dangerous. You can certainly save it to avoid having to spend even more time involved in clearing away the shattered muktzah object if it had fallen” (Yalkut Yosef, Muktzah).