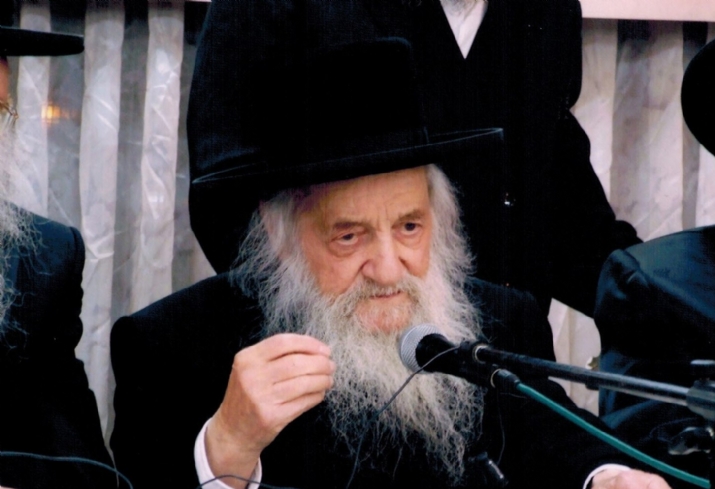 One Shabbos, at a very large men’s mikvah, a disagreement arose between friends. As one man dried his hair, his friend made a motion indicating that this is forbidden. After they left the mikvah, he explained: “The halacha follows the opinion on Shabbos 128 that one may not squeeze water out of his hair. Clearly, using a towel in a forceful manner as you do is forbidden. The only leniency I have ever heard was in the name of Rav Yosef Shalom Eliyashiv, who ruled that one can gently place a towel on his hair, since this doesn’t squeeze the water. But toweling dry in a vigorous manner is certainly forbidden.”

The person who was rebuked wasn’t so sure about this, so he asked a posek. “Well, the truth is that although he quoted the opinion of Rav Eliyashiv correctly – this is also the view of the Ben Ish Chai, by the way – I know of two other gedolim who argue. Dayan Fischer held a more stringent opinion; he forbade even placing a towel gently on wet hair. This was also the opinion of Rav Binyomin Zilber.

“Rav Shlomo Zalman Auerbach had a more lenient view. He explained that although squeezing out hair is forbidden miderabbonon, this is only if one squeezes the hair to get the liquid, since doing so resembles the melacha of sechitah. But there is no prohibition to squeeze out the liquid in his hair into a towel. As long as the towel completely absorbs the liquid, one may definitely dry his hair with a towel as energetically as he likes” (Orchos Shabbos,Even Yisroel, Shemiras Shabbos Kehilchisa).

SHABBOS 129: THE BLESSING OF SHOES

It is surely remarkable that the bracha we say every morning regarding shoes is she’asah li kol tzorki.Rav Shmuel Hominer pointed out that we should have in mind to thank Hashem with our entire heart for providing us with all of our needs, not only shoes.

Rav Yosef Chaim Sonnenfeld explained why our sages specifically mention shoes, when the language of the bracha is fairly general. “On Shabbos 129 we find that one should sell even the beams of his house to purchase shoes. It is for this reason that the bracha for all of our needs especially alludes to shoes.”

The Bnei Yissoschor explains this on a deeper level. “The Mishnas Chochomim says in the name of the ‘Masters of Allusion’ that we wear shoes for two reasons. First, it is to protect our feet. Another reason is because Hashem cursed the ground after Adam’s sin. Avoiding touching the ground while we are immersed in our day removes us from being in direct bodily contact with the ground and its cursed nature. It is for this reason that Hashem told Moshe to remove his shoes. Since he was on holy ground, it was preferable for him to remove his shoes.

“This explains why our sages say to sell all of one’s property to purchase shoes. It is also why we say she’asah li kol tzorki specifically about shoes. All of our needs revolve around avoiding what is cursed, because this is the means through which we attain bracha” (Olas Tamid; Chochmos Chaim, p. 352; Agrah D’pirkah, p. 212).

It was the dead of winter. In Bialavzeg, snow and ice abounded. Rav Nosson Dovid of Shidlavtzi strode through the streets. He had been called to be sandek at a bris being held fairly nearby. As the rebbe walked, someone kept trying to point out to him various shortcuts to get to his destination quicker. To this man’s astonishment, the rebbe chose to go the longer way through the main streets of the town. “In this manner, I honor the mitzvah,” the rebbe explained.

The Munkatcher Rebbe recounted this story and brought a source for this from Shabbos 130: “I say that the ways of tzaddikim are holy based on earlier sources. The source for the rebbe‘s practice is in Perek Rebbi Eliezer regarding milah. There we find that on the day of a child’s bris, one should walk with the izmel, the special knife used to perform bris milah, through the market for all to see to endear the mitzvah to them. It is obvious that it is not necessary for the milah to carry the knife through the market. This is done solely to show how much we cherish this great mitzvah. Similarly, the rebbe chose to take the longer route to demonstrate how precious mitzvas milah is in his eyes. In this manner, everyone will treasure this special zechus” (Divrei Torah, Part VII, #62).

Rav Moshe Sternbuch writes: “It is quite normal for a person to take an apartment or bungalow for several weeks of the summer. If one’s stay is for thirty days, he must be careful to place mezuzos on the doorposts. Obviously, if his landlord is a non-Jew, there will be no mezuzos and one must put mezuzos up. And even if his landlord is a Jew, unless he is careful with mitzvos, one must check the mezuzos, since they likely invalid. Sadly, most mezuzos procured by your average Jew today are not kosher. Due to our many sins, unscrupulous merchants from Eretz Yisroel are selling invalid mezuzos around the world.

“If one rents a bungalow or apartment in EretzYisroel, he must immediately place mezuzos on the doorposts, even if he is staying for less than thirty days. I was very confused regarding this halacha, since I used to rent an apartment in Eretz Yisroel from a Jewish landlord who was not careful in mitzvos. I didn’t want to put up my own mehadrin mezuzos, since it would be forbidden to take them off when I leave. How could I replace mezuzos which are almost certainly invalid?

“I resolved the problem by taking three people to the apartment with me, two who were kosher witnesses and one to be zocheh, and thenI was mafkir – Iwaived – my rental rights to the apartment and declared it ownerless. In this manner, I avoided being obligated in the rabbinic obligation to put a mezuzah on an apartment in Eretz Yisroel even if one is not staying in the apartment for thirty days. It is clear from Shabbos 131 that this act discharges one from his obligation in mezuzah for less than thirty days in Eretz Yisroel” [Teshuvos Vehanhagos, Part I, Siman 641 & 645).

SHABBOS 132: THE GREATNESS OF BRIS MILAH

When the Menoras Hamaor begins discussing the mitzvah of bris milah, he expresses the greatness of this mitzvah: “I shall begin discussing the laws of milah, the pe’er, splendor, of all the mitzvos. Hashem gave this mitzvah to our father, Avrohom, and his descendants after him. This was one of the very first mitzvos that we find in the Torah, since it is so essential. We find in Shabbos 132 that there are thirteen covenants on bris milah in Tanach…”

The Medrash tells us that from the time a baby boy is given a bris, he is a ben Olam Haba (Menoras Hamaor, chapter 6; Medrash Tanchumah, Parshas Shemini).

The Ohr Pnei Yitzchok explains why there is such an abundance of seforim written by some who are not known as the greatest scholars.

“I always wondered about the custom in our times that anyone who wants to write a sefer does so. I once heard from the av bais din of Warsaw, ‘It seems amazing in my eyes how many people write seforim on hilchos shechitah. It seems as though every shochet or rabbi feels a drive to write another one!’

“But I later found an interesting way to be melamed zechus on this practice. In Shabbos 133 we find that that after Abaye heard a certain halacha from Rava and agreed, the Gemara says that both Abaye and Rava say the same halacha. The Sefas Emes writes: ‘We see that whenever the Gemara states that two Tannaim or Amoraim say the same thing, it is possible that they did not both say the same halacha independently. It may be that one heard it from the other and accepted it. When a Tanna or Amora accepted his friend’s words, it became the opinion of both and has more halachic veracity.

“We can use this concept to explain the numerous works written by those who are not such scholars. Since they receive haskamos from gedolim who check what they say, it is as if these works are written by these gedolim. Since these gedolim are not cholek – they have acquiesced that the sefer is correct – it is like d’amerei tarvayhu, as if they both said the same thing” (Ohr Pnei Yitzchok, p. 35).

This daf discusses when a bris can be performed on Shabbos.

A certain well-known mohel went to pay a house call to a “client.” Although he never took money, he was very devoted and would pay a visit after the bris to help the parents remove the bandages if needed.

When he was at the home of the newborn, the father asked him a question: “I don’t understand how mohalim do milah on Shabbos for the children of Jews who are not observant. After all, the Shulchan Aruch says explicitly that one may not perform milah on the child of a mumar or one who desecrates Shabbos.”

The mohel – who was a very well-known expert in the halachos but was already an older man – did not recall this halacha and asked to be shown where it says this. When he saw it, he was astounded and promised to look into the matter.

He found that Rav Shmuel Halevi Wosner discusses this, as do other poskim. Rav Wosner writes: “The Shulchan Aruch is only discussing those who are not tinokos shenishbu, halachically considered to be children who were taken captive who are not at fault for their sins. [This is the well-known criterion of the Chazon Ish for determining who is a tinok shenishba.] For the children of wayward sinners who knew better and connected well with Yiddishkeit but then left everything, one should not make a bris on Shabbos. But for children of those who fell away through no fault of their own, it is certainly permissible to do a bris on Shabbos even if they do not keep Torah” (Shu”t Shevet Halevi, Part IV:204).