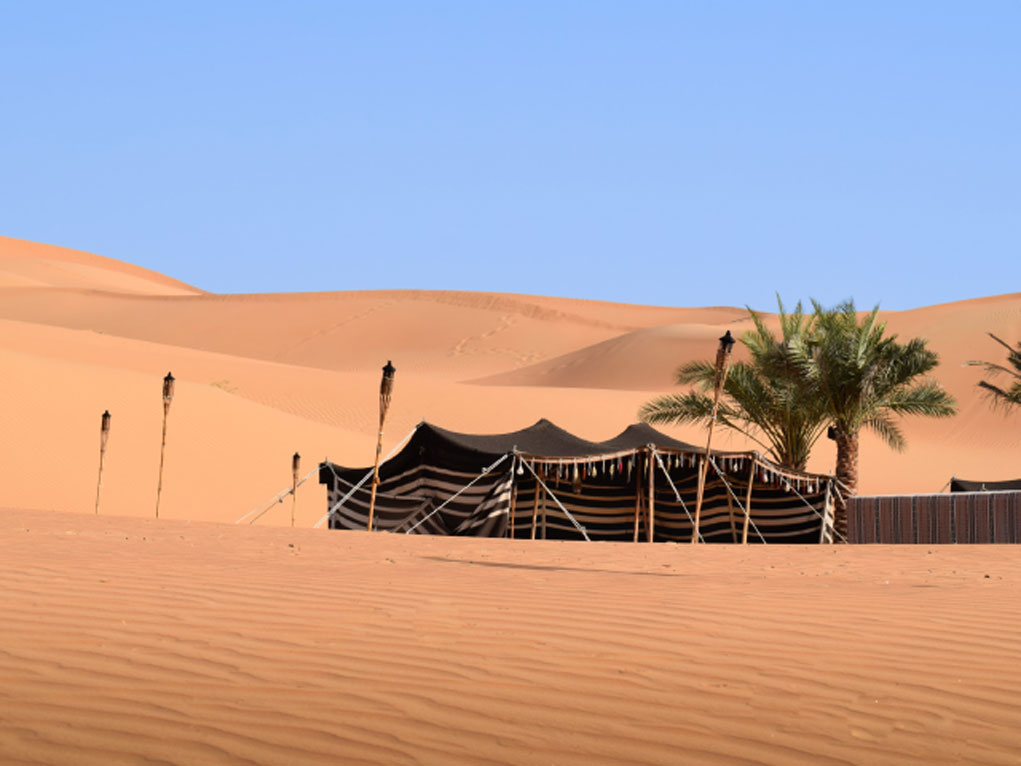 It is interesting that last week, when the Torah introduced us to Noach, it did so in glowing terms, informing us that he was a tzaddik tomim, who walked with Hashem. When referring to Avrohom Avinu, the father of our people, we aren’t told much about him. His lineage is presented at the end of Parshas Noach, and this week we are told that Hashem appeared to this person named Avrom and told him to leave his home and move somewhere.

We know nothing about this person, why Hashem would communicate with him, or why He would offer him several blessings. All he had to do was move and go somewhere else. Hashem doesn’t tell him where to go. Apparently, the more important part of the directive was that he should move, separating himself from the culture and people he was with, and settling in a soon-to-be-determined location.

We learn from Medrashim most of what we know about Avrohom. Although Noach was still alive when Avrohom was born, the world had already forgotten about its Creator and began serving the moon, stars, sun, and idols they fashioned. Avrohom, on his own, recognized that the world had to have been created by a Higher Being and spent the first years of his life seeking Him out.

He was vilified by those around him for violating the doctrines of his day. Worse, he became a threat to his father and the ruling powers. They conspired to kill him and put an end to his dangerous influence.

It would have been much easier for Avrohom to play along with them as he pursued his own agenda. His life would have been smoother had he not antagonized the powerful as he went about his personal search to understand how the world came into being.

But Avrohom was uncompromising in his battle for the truth. He discovered the Ribono Shel Olam and shared his findings with the world. He was not deterred by the powerful or by friends, or even by his father.

When his father gave him control of his idol shop, Avrohom fearlessly destroyed the idols. When he was threatened with death by fire, he didn’t hesitate, negotiate or compromise. He didn’t rationalize that if he were to die, there would be nobody to promote the idea of a Creator and return justice and morality to the world.

Hashem’s directive to Avrohom of Lech Lecha seems to define him. At every juncture in his life, when he is confronted by evil people, he is never pragmatic, but always decisive about moving on independently.

When he learned that the shepherds of his close nephew and disciple Lot were improperly grazing his animals in the fields of others, he told Lot that it was time for them to separate.

Avrohom instructed Lot, “Hipared na mei’olay – Please separate from me” (Bereishis 13:9). He was his closest relative and student, but that didn’t matter when Lot would not rectify the thievish behavior.

Sending Lot away, Avrohom finalized his separation from the people of his past. A few pesukim later, the posuk (13:14) states that “acharei hipared Lot mei’imo, after Lot had parted from him,” Hashem blessed Avrohom. After Avrohom separated from a person consumed with pettiness and dishonesty, he became worthy of more blessing (see Rashi). Hashem told Avrohom to take a sweeping view of the land, for it would all be given to him and his plentiful offspring. “Walk its length and breath, for I will give it to you,” Hashem says.

Later in the parsha, Avrohom went to war to defend Lot and his Sedomites. When the king of Sedom attempted to gift Avrohom all the captured wealth, Avrohom declined. “Harimosi yodi el Hashem konei shomayim va’aretz. I will not take from you even a thread or a shoelace.”

Avrohom felt that he did what he had to do for his nephew and battled the enemies of his region, but when the war was won, he wanted no benefit from the spoils of that war that the king of Sedom offered him.

He could have easily rationalized his right to the treasure. After all, Hashem had promised him great wealth, and this could be seen as fulfilling that promise. Sedom was a place of evil, and Avrohom separated himself from having anything to do with its king or its wealth.

And once again, it was following the separation that Hashem appeared to him and said, “Al tira Avrom, Anochi magein loch, sechorcha harbeh meod,” giving him new, monumental brachos, culminating with the Bris Bein Habesorim (Bereishis 15:17-21).

Lech lecha. Separation leads to brocha. Lech lecha, go along your own honest, moral path and you will be blessed. Lech lecha, follow My word and detach yourself from those who chase fleeting pleasure and you will have more than they in this world and the next.

When Hashem’s blessing came to fruition and Avrohom returned from Mitzrayim weighed down with wealth, he remained the same as he was in Choron. As he returned from his adventure in Mitzrayim, which led to the accumulation of his great fortune, the Torah recounts that he returned to the same tent in which he had previously lived. He did not permit his material success to give rise to pride and arrogance and turn him from Hashem. He returned to his mizbeiach and called out in the name of Hashem.

He remained separated from the physical and temporal, interested only in the holy and enduring.

Lot was different. He hung onto Avrohom, but when he returned from Mitzrayim, there was a change. The posuk doesn’t recount that he called out in the name of Hashem. The posuk doesn’t say that he returned to where he had been living. The pesukim (13:3-5) which state that Avrohom returned to his previous home and mizbeiach are followed by the posuk which recounts that “Lot who traveled with Avrohom also had sheep, cattle and tents.”

Lot gravitated to Sedom, known for its depravity and hedonism. Its lifestyle was attractive. It was a place of glitz and glamour. It was then that his employees began quarreling with those of Avrohom, leading Avrohom to separate from him.

Someone who is enamored with physical pleasure will find it hard to resist the temptation for money. If glamour and glitz appeal to him, he will have a tough time turning his back on that world. He will quickly jettison his values to earn more money and seek pleasure. He won’t be able to separate himself from what is corrupt and improper.

If the “good life” is attractive, then it will be difficult to smash idols. Avrohom was far wealthier than Lot ever dreamed of becoming because he remained loyal to his mizbeiach and cared for others. The selfish people of Sedom wouldn’t share anything with anyone. They needed everything they had for themselves. They ended up with nothing but eternal damnation.

Avrohom and his offspring who follow in his separatist ways will forever be sealed with brocha – becha chosmin – as long as they remain loyal to what is true and good, follow the Torah and mitzvos, and refrain from engaging in devious, dubious, dishonest behavior. They raise their children to distinguish right from wrong. People who are deserving of the Divine brachos are not seduced by the blandishments of Sedom.

The pressures are difficult to withstand. Life is expensive and hard. Everything is going up in price. It is difficult to be like Avrohom Avinu, unimpressed by the physical, the mighty and the powerful. It is not easy to be a separatist, cleaving to the truth, speaking and acting truthfully and going against the tide.

The elections are next week and people have decisions to make. People have to decide whether to stay home, not taking part in impacting the culture of the land, or if they will extend themselves and put in the effort to take advantage of the democratic process to do what they can to bring back morals, law, justice, and honesty to the land.

It was no secret that the Pennsylvania Democrat senatorial candidate suffered a stroke. What was a secret was how the stroke affected him. His campaign and party colleagues all said that the health issues didn’t affect him much and that he would be able to effectively serve in the highest legislative body in the country.

In the debate, he was not able to coherently express an opinion on any pressing issues. His performance was embarrassing and pitiful. Any intelligent person watching the debate could quickly determine that the candidate had no grasp of the issues, nor the ability to think them through or discuss them at any depth.

Parties and voters are supposed to be making decisions based on what is best for the country and the citizenry. So, you could be forgiven for expecting party leaders to apologize for running this candidate and not replacing him when it was still possible. You could have expected his family members and campaign aides to apologize for regularly reassuring voters that Mr. Fetterman was fine. It is clear that he wasn’t and isn’t and cannot effectively serve in the position he is running for.

But that didn’t happen. The party rallied around him while the mainstream media covered the debate as if everything was normal.

The party’s two biggest heavyweights (everything is relative), the president and vice president, who haven’t done much public campaigning, were brought into the state for a joint rally on behalf of a candidate who had just showed that he is not capable of serving. Party spokesmen and leaders were all over the media, denying what everyone had seen and heard, acting as if the candidate would be a fine senator should the people elect him.

They demonstrated the difference between us and them. “Asher pihem diber shov.” Their word is not a word, their facts are not facts, and their interests are for power and not the public benefit.

As heirs of Avrohom, we have to remain loyal to following in his ways, uninfluenced by the culture around us, unimpressed by all the temptation for that which is glitzy, shiny and glossy and appears to be glamorous. We have to seek separation from all those who are not – and all that is not – consistent with Torah and Torah ideals. We have to be all about truth, honesty, fairness, decency and kindness, and if we are, we will merit the brachos Hashem blessed Avrohom and his children with. Amein.