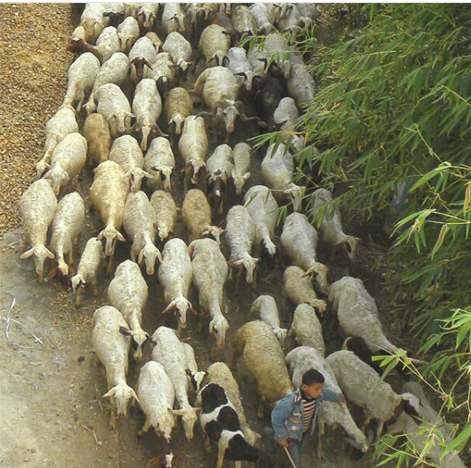 The well-known mohel, Rav Shlomo Miller, related something that took place when he was a talmid in a yeshiva in Haifa.

“Once, the rosh yeshiva had to travel somewhere out of town and asked me to accompany him. In those days, the vast areas along the road were not yet built up and settled, so all we saw during the ride were mountains, water, heaven and earth.

“Suddenly, the rosh yeshiva pointed to one direction and asked me, ‘Shlomo, what do you see there?’ I looked to where he was focused and didn’t notice anything special.

“I noticed that in the distance, a young Arab boy was leading an enormous flock of oxen and cows, sheep and goats all by himself. Seeing that I didn’t understand what the lesson was, he continued.

“This little child is so greatly outnumbered by the vast flock behind him. He is so miniscule in comparison to the numbers of animals following him. One would think that he should be influenced by them, get down on all fours, and start walking like them. But he isn’t doing that. Why? Because even this unsophisticated peasant child realizes that he is a ben adam and the entire flock that is following him is composed of animals. And man looms way above animals.”

This is something that we have to internalize. The human mind is small in size compared to the rest of the body, and yet it is the intellect of the brain that sets man apart from the other creatures on earth. He must utilize it to lead his life and not allow his many physical desires and inclinations to cloud his thinking and lead him astray.

Every one of the Chumashim has a central theme that unites all of its parshiyos. Sefer Bereishis is the Book of Creation, speaking not only of the creation of the world, but also the creation of its purpose, the formation of Klal Yisroel through a process of selection. Sefer Shemos speaks about the redemption of our people from golus Mitzrayim and how we climbed to great spiritual heights through the miracles we experienced with Matan Torah. The summit of our ascent came when the cloud rested upon the Mishkan. The holy Shechinah dwelled amongst us, a sign that, as a nation, we reached the level of the avos and imahos, who initiated this experience.

What, then, is the central theme of Sefer Vayikra? Simply put, Chazal called it Toras Kohanim. Once we attained this exalted level, we needed the tools to help keep the Shechinah in our midst by maintaining our purity. This sefer focuses on the laws of the Kohanim and Leviyim, the bringing of korbanos, and other laws regarding sanctity. Through these sacrifices, we nurtured a constant relationship with Hashem, and if we sullied ourselves by transgressing the Torah, there were korbanos to help us merit forgiveness and purification from our sins (see Ramban).

Another interpretation is offered by the renowned maggid, Rav Yaakov Galinsky zt”l. The Vilna Gaon said that the entire Torah is alluded to in its first word, bereishis. Similarly, says Rav Yaakov, the entire Vayikra is encapsulated in the word of the first mitzvah of this Chumash. “Adam ki yakriv mikem… When a man amongst you brings an offering to Hashem.” Why does this Chumash start with the word adam (see Rashi)?

The Medrash tells us that before Hashem created Adam, He conferred with the angels and said, “Let us make man.”

“What is man’s nature?” they asked.

“His wisdom will be greater than yours,” He answered.

“And what is your name?”

“I am fit to be called Adam, for I was created from the adamah, the earth.”

Rabbeinu Bachya says (Bereishis 2:19) that with the naming of the animals, Adam displayed tremendous chochmah, for he was able to recognize the unique nature and character of each individual creature and he named them accordingly. Furthermore, he was an expert in the deep meaning and the properties of the Alef-Bais with which the world was created and the combination of these letters. Hence, he formed words with a synthesis that most accurately described the composition of each animal.

The question then tugs at us forcefully: Why in the world did he name himself Adam after the earth? He possessed a most noble soul from heaven, a portion of G-d higher than the malachim. His intellect was greater than theirs. His spiritual height spanned from earth to Shomayim (Chagigah 12a) and he understood the depths of Hashem’s actions (Abarbanel, Devorim 4:25) and the reasons for all the mitzvos. His level was so elevated that when the malachim first saw him, they wanted to exclaim, “Kadosh!”

The Gemara tells us that Rabi Beno’oh was given permission to go into the rooms of the Me’oras Hamachpeilah to measure them, and he was able to see the avos and the imahos. Yet, when he was about to enter the inner cavern of Adam Harishon, a Heavenly voice rang out, forbidding him from gazing upon the man who was created directly by Hakadosh Boruch Hu. Yet, he did get a glimpse of Adam, and he commented that his two heels radiated like the brightest sun (Bava Basra 58a), an indication of his gargantuan spiritual height (Maharal).

This was his level after he sinned and his lofty madreigah was lowered considerably. We can’t begin to fathom his level before the chet of the Eitz Hadaas. And yet, what name did he call himself? Adam, because he was created from the earth. How do we understand this? Is this the real essence of man? It is like calling a Sefer Torah parchment. Where is the chochmah in this?

The answer, says Rav Yaakov, is so penetrating and edifying. Adam did not get carried away with his remarkable attributes, his exalted stature or his lofty perceptions. Rather, he identified his deficiency, the potential barrier to his success, and determined exactly what he had to rectify and enrich. He recognized that he must compete with his physicality and its nature, his middos and inclinations. He realized that it had the power of diverting him away from the path of Hashem and neutralizing his G-d-given attributes. His job was to unite all of these components to form a cohesive unit in serving Hashem. To remind himself constantly of this challenge and lifelong goal, he named himself Adam for the adamah within himself that he had to conquer.

What great wisdom and insight! Man has explored the world and discovered many lands, scaled the vast oceans, and charted many water routes. He has soared to the heavens, landed on the moon, and peered into faraway galaxies. He has made incredible advances in technology and medicine. Yet, despite all of this success, he is still so far away from conquering himself and pursuing that which is most paramount: “Reishis chochmah yiras Hashem – The beginning of wisdom is the fear of Hashem” (Tehillim 111:10). Consequently, despite all of his progress, man is constantly descending to the lowest depths of immorality. Adam recognized that his work was to overcome his deficiency and steer the adamah within him in a positive direction. He thus named himself accordingly.

Adam realized how far the earthliness within him can cause him to stray off course. He could have moped, he could have complained, and he could have become depressed. Here I have so many attributes, the ability to live a heavenly life, and this physical component is a barrier to realizing my aspirations. Instead, by adopting this name, he declared his life’s mission to be to conquer this area and to galvanize it for good.

Sefer Vayikra begins with Adam because that is what it primarily addresses. The adamah within man can cause him to gravitate away from Hashem. He is liable to fall by transgressing the mitzvos. This sefer gives us hope. There are Kohanim and Leviyim to guide us and help us maintain a good relationship with Hashem. Korbanos tzibbur and nedavah help us nurture that bond. The korbanos of chattos and asham help purify us of sin. And even when a person becomes a metzora, who is compared to death, he can become revitalized through teshuvah and korbanos. It is the Chumash of comeback and it cries out to us, “Never give up hope!”

“For though the righteous one falls seven times, he will arise” (Mishlei 24:16). “Hashem is good and upright; therefore He guides sinners on the way” (Tehillim 25:8).

The Alter of Slabodka, Rov Nosson Tzvi Finkel zt”l, was wont to say: All of the Dayeinus that we recite in the Haggadah from Yetzias Mitzrayim lead to the climax, “and build us a Temple to atone for all our sins,” so that we will realize that Hashem gave us the wherewithal to rise up again to purify ourselves, improve and be forgiven.

Perhaps it is no coincidence that we read the parshiyos of Sefer Vayikra during the span of time between Purim and Pesach and the days of Sefirah. On Purim, we learned never to despair as we came back from certain death. On Pesach, we were delivered from bondage, and through the days of Sefirah we ascended from the forty-nine levels of tumah to Matan Torah. The theme of these daysis, “Don’t despair. March on to conquer new vistas.”