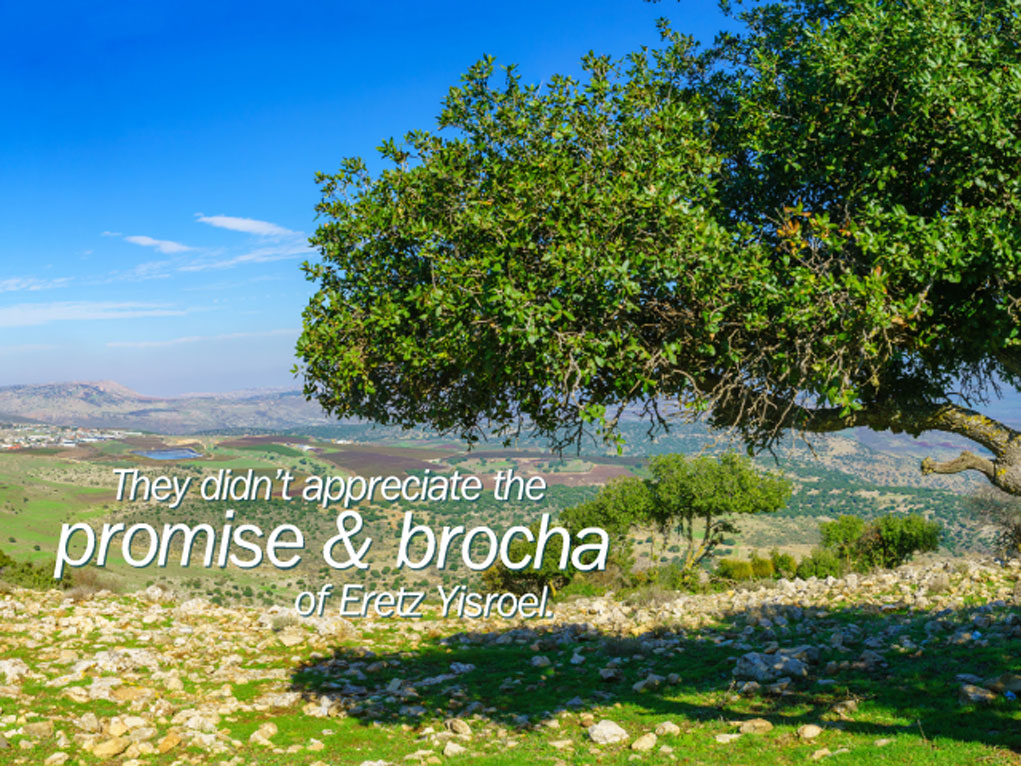 It is interesting that as we enter the period of the most enjoyable weather, following the Yom Tov of Shavuos which celebrates Matan Torah, for several weeks we lain parshiyos that depict unfortunate behavior by the Jews in the desert.

We wonder how the people sank so low so quickly. We wonder: Why the cynicism? Why the lack of faith? These were the same people who, not long ago, were slaves in a foreign land, mistreated and abused, performing backbreaking manual labor, without proper housing or income. Moshe appeared and miraculously led them to freedom. They received the Torah at Har Sinai and enjoyed Hashem’s beneficence in an unprecedented manner. They had spiritual and physical wealth, and all their needs were provided for.

Yet, they couldn’t stop complaining. They were impossible to satisfy. Nothing was good enough for them. They didn’t trust Moshe, or Hashem for that matter. They were unhappy with their food choices, weren’t convinced that Eretz Yisroel was all it was cracked up to be, thought Moshe used nepotism when appointing Aharon, they attached great powers to a golden calf they fashioned, and the list continues.

Until today, we suffer for their sins and haven’t yet rectified them.

In this week’s parsha, we read of the tragic episode of the meraglim sent to scout Eretz Yisroel. The spy mission ended in disaster, with ten of the twelve spies going off the rails, badmouthing Eretz Yisroel and doubting the Jews’ ability to capture the land promised to them by Hashem centuries earlier.

Quoting from the Medrash Tanchuma, Rashi explains that the parsha of the meraglim follows the parsha of Miriam, because Miriam was punished for the gossip she spoke about her brother Moshe, and although the wicked people witnessed this, they failed to learn anything from it.

The common explanation of this is that witnessing the painful consequences of Miriam’s lashon hora should have deterred the meraglim from speaking lashon hora about the Land of Israel.

Perhaps we can understand this by examining the root of lashon hora, commonly explained to mean gossip. The roots of this sin are more destructive than simple chitchat.

At the end of Parshas Beha’aloscha (12:1-2), the posuk states that Miriam and Aharon spoke about Moshe concerning his wife. “And they said, ‘Did Hashem only speak to Moshe? He also spoke to us!’” The posuk does not recount what they said about Moshe’s wife, but it says that they minimized their brother’s greatness. They compared themselves to Moshe, as if to say, “What’s the big deal? Who does he think he is? Hashem also talks to us. He doesn’t only speak to him.”

The essence of lashon hora is minimizing the accomplishments of other people. People will admire someone for having reached some level of accomplishment. The baal lashon hora throws a damper on it by bringing up a tale whose message is that the person is not really great. He also has failings. If we wanted to, we could succeed just as he did.

The meraglim should have learned from Miriam what happens to someone who disparages and minimizes greatness. They failed to learn that negativity and cynicism are not compatible with greatness. They should have seen that such behavior is frowned upon by Hashem. For even if the details are true, nevertheless, since it diminishes the subject’s esteem in another’s eyes, he has spoken lashon hora.

At the root of lashon hora lies a desire to destroy the respect one person holds for another.

Thus began the chain of events that are at the root of the churban Bais Hamikdosh and the reason we have not yet merited redemption.

Aharon and Miriam were tzaddikim on a high level of avodah, and it is not for us to criticize them or their speech and actions. The Torah relates what took place not for us to pass judgment on them, but so that we can learn from the episode to avoid the temptations to diminish anyone or anything.

The downfall of the meraglim, selected by Moshe for the mission, was their failure to learn not to approach matters with a negative view. They spoke against the Land of Israel, which Hashem had praised. They said that it was an “eretz ocheles yoshveha,” a land that eats its citizens. Then they said that the people who live there are strong and would make life difficult for the Jews.

The meraglim’s report caused the Jewish people to quickly lose interest in Eretz Yisroel as they bemoaned their bitter fate. There was a large gathering on the eve of the 9th of Av, addressed by the ten spies, and when it was over, “Vatisa kol ha’eidah vayitnu es kolam – The entire nation raised their voices and cried that night” (Bamidbar 14:1).

Chazal (Sanhedrin 104b, Taanis 29a, Sotah 35a) teach that Hakadosh Boruch Hu said that “since the Jewish people wept for nothing, I will establish this day as a day of sobbing for generations to come.” The Medrash Tanchuma and Medrash Rabbah (Shelach 16:20) add that at that moment, it was decreed that the Botei Mikdosh would be destroyed and Am Yisroel would be exiled.

They derive this from the posuk in Tehillim (106:24-27) which states, “Vayimo’asu b’eretz chemdah lo he’eminu lidvaro – And they despised the desirable land and had no faith in Hashem’s promise. They murmured in their tents, not listening to Hashem. Vayisa yado lohem lehapil osam bamidbar ulehapil zarom bagoyim ulezarosom ba’aratzos. Hashem raised His hand and promised that He would knock them down in the desert, and would cast down their descendants among the nations, and spread them out across the lands.”

The Ramban (ibid.) and the Maharsha (Sotah, ibid.) offer a similar explanation. At the root of their sin and the cause for their punishment – which extends to our day – is the debasement of Eretz Yisroel. The sin of the meraglim and the people was that they put down the land Hashem had promised us, saying that it is an “eretz ocheles yoshveha,” a country that eats its inhabitants, and other derogatory accusations.

This was similar to the sin at Kivros Hata’avah, discussed in last week’s parsha, where the people weren’t satisfied with the monn and all the livestock they had amassed leaving Mitzrayim. Instead of appreciating all that they had been blessed with, they complained about their food choices. They begged for the fish and watermelon they had in Mitzrayim, even voicing the desire to return to the land of depravity and servitude so they could satisfy their urges.

At the root of their sin was not appreciating what they had been blessed with. Moshe Rabbeinu was able to deal with all the various criticisms and rebellions of the people, but to this insurrection at Kivros Hata’avah, he had no response. He said to Hashem (Bamidbar 11:15), “Horgeini na harog. Kill me rather than put me through this.”

It is possible to deal with people who have philosophical differences, who have differing perceptions, fears, and legal disputes, but it is impossible to deal with people who are unappreciative of their gifts and all they have. Instead of focusing on the good and appreciating the blessing, they find fault, and are negative and unfulfilled, acting as if they have been cursed and robbed.

The sin of lack of appreciation is also what was at the root of Miriam’s disparaging talk about Moshe. She didn’t appreciate what Moshe had achieved and the ultimate heights he had reached, and thus she spoke ill of him.

The meraglim failed because they, too, were guilty of the same failing. They didn’t appreciate the great country promised them by Hashem. They traveled there and interpreted everything they saw negatively. They found negative where there was positive and lost sight of the beauty and grace of the land. “Mo’asu b’eretz chemdah,” they saw nothing good in the treasured land. They despised it and badmouthed it to their brethren.

The Yaavetz, in his introduction to his peirush on the siddur, writes that it is therefore incumbent on everyone to appreciate the gift that Eretz Yisroel is and to seek to move there. We were thrown into golus because we didn’t appreciate the greatness of the land and failed to establish a proper attachment to it. Therefore, we must do what is in our power to demonstrate that we recognize that Eretz Yisroel is the eretz chemdah tovah urechovah.

For centuries, it was a treacherous undertaking for Jews to visit and live in Eretz Yisroel. The land was desolate. Life there was extremely difficult, with many constant threats to health and safety. This began to change when the students of the Vilna Gaon and the Baal Shem Tov started moving to the Promised Land. Slowly, more people came and began developing the land and studying in kollelim funded by their hometowns and other generous donors.

Today, it is easy to fly there on an airplane and enjoy being in the eretz chemdah. There are negatives there, to be sure, but there are lots of positives. Having just returned from there, I can say that anyone who is looking for a place to visit during the summer would be better off visiting there than any European country where anti-Semitism abounds, and certainly in those soaked with centuries of Jewish blood.

As we seek to end the golus and do teshuvah for the aveiros that caused the churbanos and golus, not only do we need to work on sinas chinom and lashon hora, but, apparently, we must also work on “Vayimo’asu b’eretz chemdah” and show that we appreciate the promise and brocha of Eretz Yisroel.

As maamimim, people of faith, we must demonstrate our belief that everything that happens is from Hashem, and since this is so, when things happen that we do not understand, when we see others having more than us, when we feel as if our lives are lacking, we should remember that whatever happens is because Hashem willed it so and we should accept it as best as we can.

If we look for the good, we will find it and Hashem will bless us with more of it.