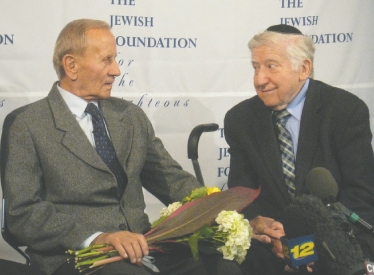 ZAWADKA, POLAND JULY 1942 The Jews of Poland are being massacred en masse. In a town called Frystak, 1600 people are marched to the city limits and then shot, their bodies tossed into a mass grave. Frieda Gersten and her eight-year-old son Leon (Moshe Aryeh) manage to escape the roundup. They trek door to door along the countryside, desperately begging local farmers to take them in.

One by one, they are turned down. Most Polish farmers have little interest in Jews, and even if they did the stakes are just too high. Anyone found harboring Jewish fugitives is put to death, no questions asked. It just isn’t worth the risk.

But when Frieda approaches Stanislaw and Maria Polziec, a couple she knew through her work as a peddler, they agree to take her in. Thus do they provide refuge for Frieda and Leon as well as three other relatives, the Weisenfelds. The five fugitives hide in the attic of the Polziec barn for two full years. It’s an extraordinary act of heroism performed by a simple family of gentile peasants.

Sixty nine years later, most of the people who were directly involved in that harrowing episode during the Holocaust have passed on. But Leon Gersten is very much alive. In a gracious and meaningful gesture of hakoras hatov, he arranges a reunion between himself and the Polziec’s son, Czeslaw, who was ten-years-old at the time. The emotional reunion, which took place last week at JFK airport, was duly recorded by many major American media outlets and the story captured the hearts of thousands.

What was it like for a young boy to hide in a barn attic for two years? According to Leon Gersten, who is today a Doctor of Clinical Psychology living in Cedarhurst, perhaps the greatest challenge was boredom. “We had no toys, no books, and nothing to play with,” he remembers. Instead, he and his cousin Moshe Wiesenfeld watched spiders catch flies and spent hours picking the lice off of each other’s heads. “Something like a search and destroy mission,” is how Dr. Gersten describes it.

They also fantasized a lot about food. The fugitives were given a loaf of bread that was supposed to last a week, as well as a few potatoes. Hunger was certainly a constant companion, but they weren’t complaining. They knew that the alternative, deportation, was much worse. Thus did they stay cooped up in very difficult conditions until 1944, when the Russians liberated Poland.

There were many close calls, to be sure. Dr. Gersten remembers the time that the Nazis stormed the farm, suspecting that something was wrong. The Jewish fugitives hurried into an underground bunker just in time, but the Germans insisted on searching the entire home. B’siyata Dishmaya, it was in middle of the winter, and the attic was filled with bushels of wheat that helped keep out the cold. Thus the Nazis failed to see the blankets and clothing of the Jews, which would have been a sure giveaway that someone had been hiding there. Says Dr Gersten, “They beat Stanislaw anyway, trying to force him to confess that he was hiding Jews. Despite being bloodied badly, he didn’t give us away.”

Neither did his five children, all of whom were circulating among their Polish peers daily. “These children were a critical part of the rescue,” says Rabbi Yonasan Gersten of Memphis, Dr Gersten’s son. “They had to keep this a secret for two full years. This meant that their friends couldn’t come to the house to visit. And, of course, they had to share the little food that they had.”

Eventually the Gerstens and Weisenfelds could hear the Russians bombing the nearby cities and understood that liberation was near. They were also worried about a possible German counterattack, so they decided to escape, by running to the Russian front in middle of the night. They eventually fled the Polziec household without properly saying goodbye. But they remained feeling grateful and indebted to their benefactors ever since.

After the War, Dr. Gersten spent some time on a kibbutz in Israel eventually settling in the New York area where he attended Yeshiva Torah V’daas. His aunt and his mother stayed in contact with the Polziecs, sending them money and packages from time to time. But when that generation eventually passed on, the connection was lost. And that was something Dr. Gersten always regretted.

About four years ago, Rabbi Yonasan came across the Jewish Foundation For the Righteous while teaching the Holocaust to his students in Memphis. This organization is dedicated to reuniting survivors with their rescuers. It also offers financial support to over six hundred non-Jews who risked their lives to rescue Jews during the War.

The Foundation did the legwork and, with the help of Yad Vashem, managed to locate Czeslaw Polziec. The heroic deeds of his family were properly recognized by Yad Vshem, and then the Foundation offered to fly Czeslaw to New York for a reunion with Dr. Gersten. He was delighted to come.

The Gerstens live in Cedarhurst, where they reap tremendous nachas from their beautiful family of Torah true Jews. Today Dr. Gersten is the proud patriarch of five children, thirty four grandchildren, and nine great-grandchildren living in Far Rockaway, Lakewood, Baltimore, Memphis, Dallas, Waterbury and Eretz Yisroel. All told, there are currently sixty descendants from both the Gersten and Weisenfeld families.

So it was with much anticipation that the entire Gersten clan gathered together to meet Czeslaw at JFK Airport last week, on the first night of Chanukah. Amidst a slew of reporters and photographers from media outlets all over the New York area, the two men embraced warmly. “Hi, hi, hi. I am very glad to see you,” was all Czeslaw could manage to say. It was a historic moment.

There were the usual carefully orchestrated photo ops and media moments, to be sure. “I cannot believe I am here,” Czeslaw says. To which Dr. Gersten responded “The only reason we are alive is because of you and your family.”

But perhaps the most striking moment of that memorable meeting is when the entire Gersten clan, young and old, emerged from the background to greet Czeslaw. This was perhaps when the magnitude of what his family has rescued against all odds was finally understood. He was clearly in awe.

Dr. Gersten and his wife are hosting Czeslaw and a nephew (who acts as a translator) for the event-filled week. The Polish guests accompanied the Gerstens to shul, joined the evening Chanukah candle lighting ceremony, as well as the annual family Chanukah party. At the Young Israel of Cedarhurst, Czeslaw was greeted with a spontaneous standing ovation from the Congregation. And he served as the Guest of Honor at the Jewish Foundation for the Righteous Dinner.

It’s the least that the Gerstens feel they could do to show their appreciation to Czeslaw for his family’s life saving heroism. “It’s overwhelming,” says Rabbi Yonasan, “to pay back a debt that you can’t really repay. But at least we can show him the family, that sixty people are alive because of him. When you say saving a life is like saving a world, here you actually see it unfolding. Just look at what this family has saved.”