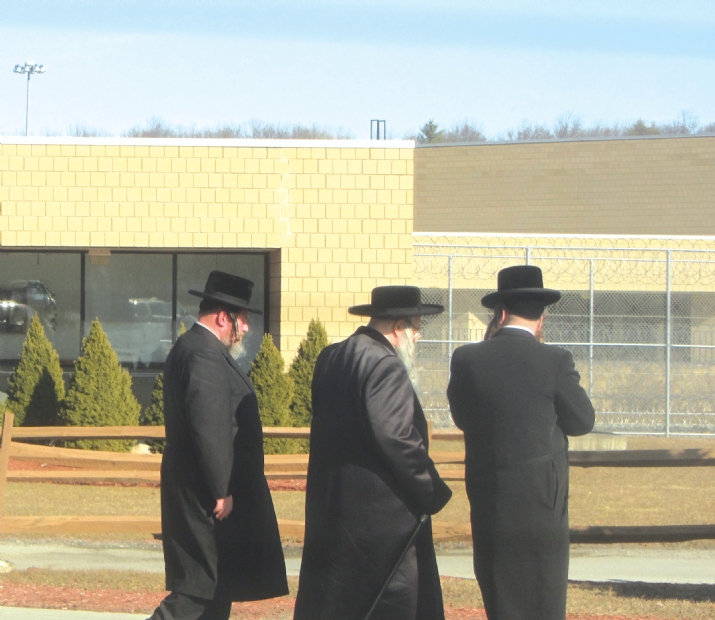 A visit from the Sanzer Rov, Rav Tzvi Elimelech Halberstam to Sholom Mordechai Rubashkin in Otisville prison left both â€œupliftedâ€ and â€œemotional,â€ one of the rebbe's gaboim, speaking from Eretz Yisroel, told Yated. Both men cried, said Rabbi Avrohom Deutch, who was part of the rebbe's entourage at the prison. â€œThe rebbe was awed that a Yid in such a degraded environment could reach such a high madregah.â€ â€˜This is a Yid who excels in bitochon,' he said afterward. â€œEveryone can learn from him. And we should all be mispalel to theRibono Shel Olam for him.â€
The visit lasted only 45 minutes, cut short by regulations that require all inmates to be counted at precisely 4:00.

The rebbe had come from Kiryat Sanz in Eretz Yisroel for a two-week trip, to visit his chasidim in Brooklyn, Union City and Monsey. Arrangements to visit Sholom Mordechai had been a part of the itinerary from the outset, Yated learned. The necessary paperwork had been submitted to the Bureau of Prisons two months earlier, and clearance granted.

I FEEL A KESHER WITH YOU

Speaking by phone, R’ Chaskel Eidlis, another of the Rebbe’s chasidim who accompanied him to the prison, said the rebbe had never before met or spoken with R’ Sholom Mordechai but felt a connection with him. “He is well-informed about him and wanted to meet him in person.”

The timing of the rebbe’s visit had posed a problem, since visitation in Otisville prison, once permitted three days a week as in most federal prisons, has been severely cut back. Visits from family and friends are now restricted to Fridays and alternate Sundays.

These measures have resulted in extreme hardship for both inmates and visitors. The intense crowding on the days when visits are still permitted often results in guards terminating an inmate’s visit for no reason other than that too many people are in the room.

This Orwellian situation – terminating an inmate’s one visit a week with his family due to crowding resulting from termination of the other visiting days – creates havoc. Family members or friends traveling from distant places, often at great expense, who were admitted into the prison visiting room, are without warning abruptly ejected.

The diminished visitation has been hard on the Rubashkin family and the rebbe did not want to cut into the little time they have together once a week. Nor did he and his entourage, in their limited time in the United States, want to have their visit at Otisville cut short or cancelled altogether.

“The difficulty was solved by having the rebbe come on a regular weekday as a guest of Rabbi Richter, the prison chaplain,” explained Mr. Shimmy Reichman, a third member of the rebbe’s entourage. “Once we were inside and had been thoroughly searched and ‘laser-stamped,’ we met Sholom Mordechai with Rabbi Richter and six other Jewish inmates in the chapel.

Reichman described the chapel as a “neutral” place with “different closets, labeled according to religion: Christian, Muslim, Jewish, l’havdil. Inside the closets are shelves of religious books… The rebbe spoke to each inmate privately, and then we davened mincha, Sholom Mordechai davened for the amud with deep feeling.”

Afterward, the rebbe asked the chasidim to sing. “For a few minutes, the singing blocked out the darkness and oppression of that place,” Rabbi Deutch, speaking from Eretz Yisroel, recalled.

The rebbe then asked, “Why is it that when Adar comes, Yidden are marbim b’simcha? Adar was the worst time for the Yidden in the times of Haman and Achashveirosh.”

“Adar was the month a death sentence had been handed down for the entire nation. The Yidden lived under a terrifying gezairah of l’hashmid, laharog ul’abeid. These are certainly not happy memories. What is the inyan of being marbim b’simcha?”

“The answer,” the rebbe said, “is that remembering the despair reminds us of the amazing yeshua, and the lesson that Hashem can turn the bleakest situation around in a second.

“A Yid who has bitachon will be zoche to yeshuos gedolos, as we saw in the time of Mordechai and Esther. That is the happiness of Purim, the knowledge that we have a father in Heaven who can do anything.”

Far from mere platitudes, the rebbe’s words drew on the illustrious legacy of his father, the previous Klausenberger rebbe, Rav Yekusiel Yehuda Halberstam, zt”l, who survived horrific experiences in the death camps. His entire family, including his wife and eleven children, were murdered by the Nazis. The rebbe himself was shot by a Nazi guard but miraculously survived.

After liberation, he came to the United States where he recovered and began the process of rebuilding. He eventually settled in Kiryat Sanz in Eretz Yisroel, where he founded a beautiful community of Torah and chasidus. He also founded the renowned Laniado hospital in Netanya. After his death, his son, Rav Tzvi Elimelech, continued his legacy as the Sanzer Rov.

The rebbe then took Sholom Mordechai aside and they spoke privately for a while, Rabbi Deutch said, adding that he learned afterward that Sholom Mordechai had told the rebbe that at a very trying time in his life, he had read the sefer “Lapid Aish,” written by the rebbe’s father, the Klausenberger Rebbe.

The sefer demonstrates the rebbe’s profound faith that enabled him to survive his frightful ordeals during the Holocaust.

In a letter to his family after the rebbe’s visit, Sholom Mordechai described the visit and shared parts of this private conversation. He said he told the rebbe that when he was in a state prison in Iowa awaiting the state labor trial, he had been brutalized by the guards when he protested the removal of his yarmulka and tzitizis, and was then thrown into his cell.

In those dark hours, he wrote to his family, a strange thing happened. A book about the Klausenberger rebbe was delivered to him. “Until today, I do not know who sent it. I read the book from cover to cover,” Sholom Mordechai wrote his family. “It gave me tremendous chizuk.”

“I shared this story with the rebbe about miraculously receiving this book,” the letter continued. “We spoke about an extraordinary incident in his father’s sefer that happened on Yom Kippur in the DP camp where the Klausenberger rebbe was interned after the war.

“The Klausenberger Rebbe was the shliach tzibur, and since there were barely any machzorimthere, the rebbe pronounced the words slowly and in a loud voice for the benefit of the mispallelim. Then he came to the vidui.

‘Oshamnu, bogadnu,’ he chanted, translating into Yiddish as he went along.

“ ‘Oshamnu, mir huben gezindikt, we transgressed,’” the rebbe began. But he suddenly stopped. He repeated the words in a tone of wonderment, ‘Mir huben gezindikt? We sinned? What does this mean? We were beaten, starved and tortured. We were murdered in horrible ways, only because we are your nation and your children!’

“He went on to the next word, ‘Bogadnu,’ translated it into Yiddish and then halted again, bewildered. ‘We betrayed? How did we betray? They choked us, drowned us, burned us alive…. only because we are your people and have remained faithful to you, Hashem, throughout the most terrible times! When and where did we betray?’

“Sobs broke out among the mispallelim. The rebbe continued the vidui. ‘Gozalnu, we stole,’ and again choked up. ‘We stole?’ he cried out. ‘Our enemies, with the approval of the world, stole everything we had–our money, our families, all our loved ones–our very lives! What did we steal?’

“The rebbe concluded that this part of the Yom Kippur davening was not for the broken survivors to say, and he closed the machzor,” Sholom Mordechai quoted from the book in his letter.

“The people behind him were by now crying bitterly. But the rebbe wasn’t finished.

“‘…There is one thing we do need to ask forgiveness for, dear friends! For the days we woke up in the freezing barracks on the hard wooden planks, starving, bitterly cold and disgusted with our miserable lives. We didn’t want to go on living.’

‘For losing hope in Hashem, for losing the will to live…for not wanting to arise and thank Him for another day in which to serve Him, and to hold on to bitachon that he will save us Yidden–for that we need to say vidui. For giving up on Hashem, we need to do teshuva.’”

Sholom Mordechai finished recounting this moving story in his letter, adding that it had  braced him in one of his darkest hours.

He shared with his family the many brochos the rebbe had given him before leaving, and how uplifting–but so painfully short–the visit was for him.

“What a zechus to daven mincha with the rebbe, whose father was the great tzadik, the Klausenberger Rebbe, zatzal, who lived through the horrors and torture of the Amalaik in our parents’ generation. But prison is a place of constraints, and there were severe constraints on the time we could be together…”

The letter concluded with words of encouragement. “Kinderlach, have bitochon in Hashem that He will very soon redeem each Yid from his Haman and his private tzorah.”