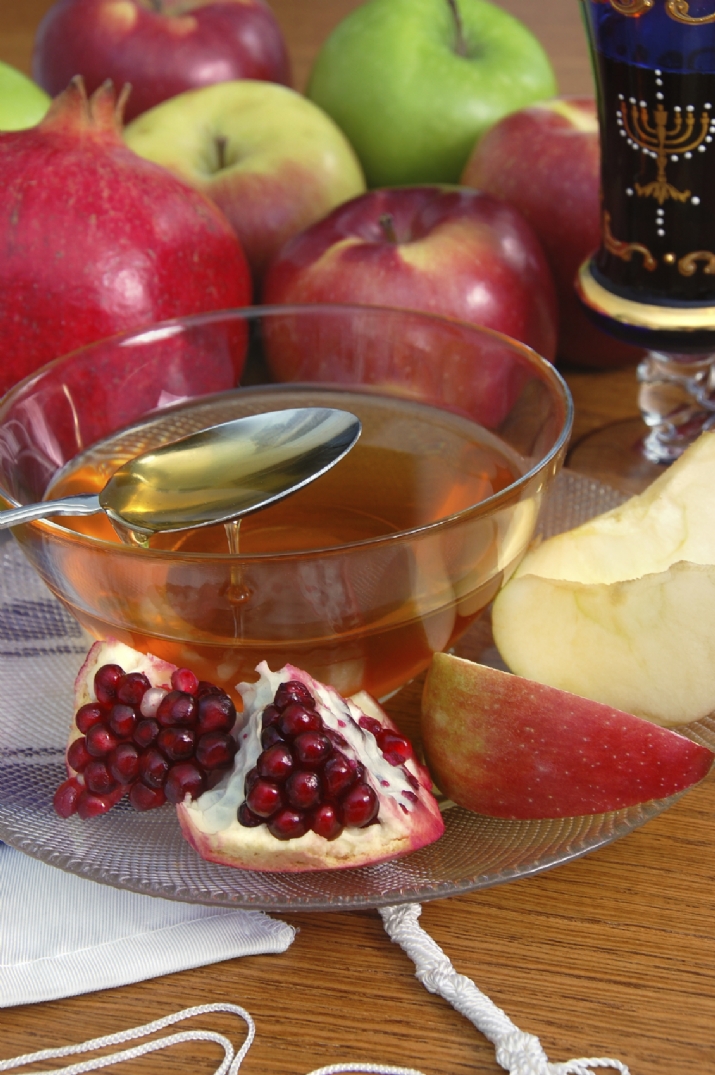 Adapted by Rabbi Dovid Kaiser Questions: â€¢ Can any type of apple be dipped in honey in order to fulfill the minhag? â€¢ What should someone do if he cannot eat one of the simanim? â€¢ Should simanim be eaten on the second night of Rosh Hashanah? â€¢ May one make a cake with almonds for Rosh Hashanah? â€¢ Is there an advantage to using the head of one type of animal over another? The Issues: â€¢The minhag to eat simanim on the night of Rosh Hashanah is almost unique among minhagim by virtue of its universal acceptance throughout Klal Yisroel and its clear source in the Gemara. The vast amount of attention that the Poskim devote to this minhag underscores its deep significance and the all-important reality that our actions on Rosh Hashanah can have consequences for the entire year and beyond.

In two places (Horayos 12a and Kerisos 6a), the Gemara mentions that it is an auspicious omen to have foods on Rosh Hashanah whose names carry positive connotations. Additionally, one of a number of Teshuvos HaGeonim on the subject, mentions the custom to consume honey and succulent meat on Rosh Hashanah, based on a passuk (Nechemiah 8:9) in which Nechemiah instructed the Jews to consume sweet things on Rosh Hashanah.1

A number of different approaches are offered to explain the seemingly superstitious practice of eating simanim. Some teach that the simanim serve to arouse a person to do teshuvah and to daven, and to thereby help the person in his judgment on Rosh Hashanah.2 Others state that this practice reflects the concept that actions taken in this world engender similar actions in Heaven.3 A third view sees eating the simanim as a way of expressing our trust that Hashem will do as we are asking Him.4

Although the accepted halachah calls forthesimanim to be eaten,5 it has been argued that the desired effect would be accomplished even if one merely looks at them.6 The Poskim therefore advise that one who cannot eat of any of the simanim should nevertheless look at it and recite the appropriate tefilah.7

-We have already noted the importance of eating honey on Rosh Hashanah. The kabballistic significance of apples is used to explain why it is specifically that sweet fruit that is eaten with the honey.8 The minhag is to eat a sweet apple together with honey.9

The brochoh of ha’eitz should be made before the apple is eaten, despite the fact that the minhag of most people is to eat the simanim after making hamotzie. The reason for this is that the simanim are not considered to be part of the actual meal.10 A brochoh need not be made on the honey because it is eaten as subordinate to the apple.11 If one will also be eating a date or pomegranate, then the ha’eitz should be made on one of those fruits as they are from among the shivas haminim.12 And because dates are mentioned closer to the word ha’aretz in Devarim 8:8 than pomegranates are, the brochoh should be made on a date even if a pomegranate is present.13

The yehi ratzon should be recited after having eaten some of the fruit , so as not to interrupt between the brochoh and eating.14

One need not make a ho’adomoh on cooked vegetables that are eaten as simanim as these items may be considered components of the meal.15 There are, however, those who are stringent and make a hoa’adomoh on a banana or a piece of melon before eating the vegetable simanim.

It should be noted that if either ha’eitz or ho’adomoh is made at the beginning of the meal, that brochoh should not be repeated later on, when dessert is served.

-Meat from the head of a sheep should be eaten both as a siman that we should be a head and not a tail, and to recall the ram involved in akeidas Yitzchak.20 In consideration of the second reason, a ram’s head is preferable to a sheep’s,21 and because of the first reason, one who has neither of these should eat of another type of head.22

-Walnuts should be not be eaten on Rosh Hashanah as the gematria of egoz (walnut) is equal to that of cheit (sin),23 and because they tend to cause an increase in mucus that may prove disruptive during davening.24 This second concern is weighed heavily on Rosh Hashanah when one should be extra careful to quietly listen to chazaras hashatz.25 Furthermore, this reason is applicable to almonds26 and beans as well.27

Nuts that have been baked as part of a cake do not cause excessive mucus. The first concern, however, may still exist. Thus, while walnut cake should be avoided on Rosh Hashanah, because almonds are subject only to the second concern, one may eat almond cake.28 Cooked beans, such as arbis or beans in cholent are similarly permissible.29

-Since, as we have seen, there is a source in Tanach for the idea that sweet foods should be eaten on Rosh Hashanah, some have a custom to avoid tart or bitter foods.30 These include foods cooked in vinegar31 and lemons.32

The minhagim are varied regarding when to refrain from eating walnuts and tart or bitter foods, with some abstaining until after Hoshanah Rabbah.33 One who does not know what his family’s custom is may certainly be lenient after Yom Kippur has passed.

-While some authorities caution against eating grapes on Rosh Hashanah, based on kaballah,34 others were not concerned by this.35

-From the significance that we attach to the foods that one eats on Rosh Hashanah, it is obvious that one must be extremely careful regarding what he does on those days. One must take care to remain in good spirits and to avoid becoming angry36 and wasting time.37 Certainly, one should learn as much Torah as possible on Rosh Hashanah. It is a segulah to learn one of the four perakim of mishnayos Rosh Hashanah at each of the seudos.38

The minhag is to eat a sweet apple with honey. Sour apples should not be used.

One who cannot eat a siman should simply look at it before reciting the appropriate yehi ratzon.

While some have the minhag to eat simanim on only the first night of Rosh Hashanah, others do so on the second night as well. One should follow his family’s minhag.

On Rosh Hashanah, one may eat cake containing almonds.

It is preferable to eat meat from the head of a ram on the night of Rosh Hashanah as opposed to another type of head.

Questions and comments may be addressed to DovidKaiser@gmail.com. Rabbi ZevSmith’s weekly halachah shiur takes place on Sunday mornings at the Stoliner shul 4609 16th Aveat 10:00am. Tapes/cds of the shiurim are available at 718.851.8651 and at tapecenter@yeshivanet.com.

1       The teshuvah is quoted at the beginning of Mordechai to Masechta Yoma; also see Maharil, Minhagim, Rosh Hashanah 7, where five additional pesukim are brought to prove that sweet things should be eaten on Rosh Hashanah.