The Real Chanukah Message in the Era of Trump 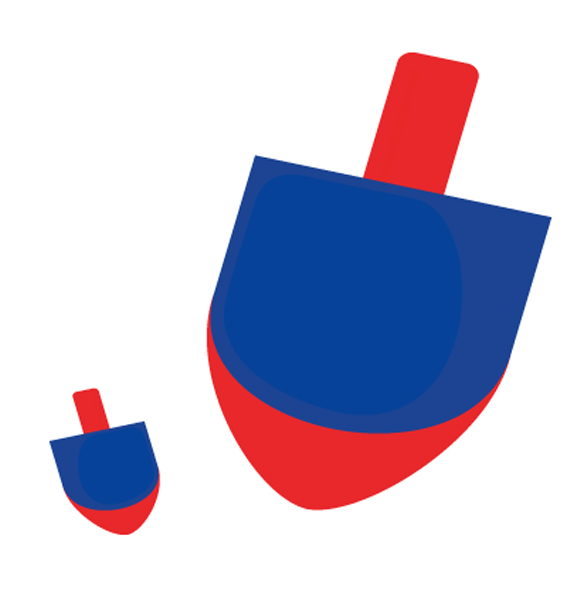 Who knows why we need the “Chanukah Message of Righteous Civil War” in our time? Drum roll, please…

The answer is to combat hatred in the age of Trump. Or at least that is today’s message of Chanukah as espoused by Columbia Journalism Professor Samuel G. Freedman.

Writing in the Forward, Freedman says, “I pray that in Jewish households that include Trump voters and excusers, the Hanukkah candle lighting, the Purim partying and the Passover Seder will all be afflicted with deserved discord.

“We are not living in a time of politics as usual. Donald Trump is not Ted Cruz, Marco Rubio or any other of this year’s Republican candidates, with whom normal political debate would be acceptable… No, my fellow Jews, social grace may be a desirable trait, but it is not an excuse for tolerating bigotry. Any version of Jewish peoplehood worth having must refuse to worship the swine of hatred on the altar of ethical values. Life cannot go on as if things are normal.

“When we face the new regime as it is — an autocrat secretly assisted by Russian skullduggery and cyber bullying with an inner circle populated by a Putin appeaser, an anti-vaccine propagandist, a climate-change denier, an alt-right ideologue…— then the miracle of the oil this Hanukkah should be our fierce persistence in fighting evil, the unextinguished flame of our Yiddishe neshamah, our Jewish soul…”

Arousing the Yiddishe Neshamah to Fight…Trump?!

So there you have it, my friends. According to Samuel Freedman, the message of Chanukah is not that we must fight off the Hellenist assimilationist scourge of Reform, Conservative and Open Orthodoxy that has sent millions to assimilation. We have seen the graphs regarding assimilation. It is common knowledge that aside from the Orthodox, the overwhelming majority of American Jews will not have Jewish grandchildren. That, however, doesn’t seem to unleash the passion in Professor Freedman’s “Yiddishe neshamah.” It’s Trump who really gets him riled. We need a Chanukah revolution against Trump, not against assimilation, not against the attempts to scuttle the Religious Freedom Restoration Act (RFRA) that would make it extremely difficult for religious Jews to live according to their conscience in America. No, that kind of Hellenization seems to be fine, according to Freedman. Trump and his supposed bigotry are the issue.

Freedman has sadly revealed how far removed he is from understanding the most elementary lessons of Yiddishkeit. This, of course, shouldn’t be that surprising considering that the New York Times often chooses to consult with him on chareidi issues.

The truth is that I sort of feel sorry for Jews like Freedman. Their entire worldview has been upended with the election of Donald Trump. The fact that Trump has a group of prominent proud Jews as his advisors – including David Friedman, the new appointee as ambassador to Israel – has your average liberal intellectual completely bent out of shape. There is nothing in his experience that has given him the tools to deal with this new reality, and if it wasn’t somewhat gleeful to observe, one might feel sorry for them.

The truth is that I should not admit this. It is not nice – nor permitted – to seemingly gloat over the downfall of others, but these days, when I want to raise my spirits, I read the New Yorker magazine. The New Yorker is one of those magazines written for “enlightened” people. They are often at the forefront of culture wars. Many New Yorker writers and those who identify with their worldview are full of righteous indignation and anger. They are often the types who understand with full earnestness why a baker should go to jail for refusing to bake a cake in celebration of a union that the Torah calls an abomination. Many New Yorker readers are deeply worried about the continued viability of the planet due to climate change and consider anyone who isn’t likeminded as not only a country bumpkin, but a dangerous, prehistoric savage who is threatening the lives all the enlightened citizens of the planet.

Of course, the New Yorker is so enlightened that somehow its writers will be able to convince you that there is no such thing as a men’s or women’s bathroom.

That is why reading that magazine these days is an almost gleeful pleasure. It is the pleasure of watching bittul avodah zarah, the nullification of the avodah zarah of modern liberalism. Indeed, at times, reading that magazine in the post-Trump victory era constitutes too much hana’ah from olam hazeh. Watching its writers twisting in the wind with hatred, exasperation, anger and frustration not just about the Trump victory, but about what he is doing with his cabinet picks, is really a special treat.

The “Horror” of all “Horrors”

David Remnick, an editor and staff writer at the New Yorker, wrote: “Every day brings at least one fresh outrage: the appointment of a national-security adviser whose temperament resembles those of the unhinged generals…; a keeper of the environment who denies the science of climate change; a chief strategist and senior counselor who ran a website laced with racist poison and bogus ‘news’; an attorney general who regards the Voting Rights Act as ‘intrusive’ and once referred to a subordinate as ‘boy.’”

What really gets Remnick riled up even more than the above, however, is the fact that Trump appointed David Friedman as ambassador to Israel. In Remnick’s opinion, one of Friedman’s terrible sins is that he writes for Arutz Sheva, “a pro-settler website.” First of all, in the lexicon of liberal Jews such as Remnick, “pro-settler” is a horrible pejorative. It might even be worse than saying “he doesn’t believe in climate change,” Heaven forbid. Thus, all must understand that Friedman is a pretty horrible fellow.

Remnick cannot come to terms with the fact that Friedman wrote that J Street is worse than kapos. Remnick quotes Friedman: “They are far worse than kapos—Jews who turned in their fellow Jews in the Nazi death camps. The kapos faced extraordinary cruelty, and who knows what any of us would have done under those circumstances to save a loved one? But J Street? They are just smug advocates of Israel’s destruction delivered from the comfort of their secure American sofas—it’s hard to imagine anyone worse.”

Remnick assumes that we all understand how awful and reprehensible Friedman’s words are, so he leaves them without comment. The truth, however, is that Remnick, like Samuel Freedman, possesses a worldview that is so liberal, but at the same time so removed from an authentic Jewish viewpoint, that he will sadly never get it. Indeed, Trump was elected because millions of Americans were simply fed up with the Remnicks and Freedmans of the world telling them how to think and what is morally right and wrong. Instead of trying to understand the sentiment that gave an uncouth fellow like Trump the presidency, they are lashing out and showing how detached they really are.

Tragically, liberal Jews such as Remnick and Freedman have adapted leftism and liberalism with a religious fervor that has replaced their religion of birth. Out of ignorance or stupidity, they often conflate the two and see liberalism as the ultimate expression of their Judaism, using foolish and superficial slogans such as “tikkun olam” and the like as justification.

Sadly, when it comes to them, the real Chanukah story is over. The Hellenists have already won. That is why the unconventional nature of the Trump phenomenon drives them mad. Trump has taken all of the sacred cows, whether it is climate change, “settlements are making the peace process impossible,” or “Iran is bad and the Iran deal is a catastrophe,” and he has, without apology, told them that “their gospel,” “their truth,” is false. These Jewish liberals cannot deal with the fact that Trump has summarily tossed in the garbage all of these “givens,” all of what they deem “sacred” almost with religious significance.

On a practical level, there is an important Chanukah lesson that we can all learn from the above. It is probably too late to convince the Remnicks and the Freedmans that their religiously inspired liberal worldview is a “pot of lentils.” It is these shapers of public opinion who have contributed to generations of assimilation and generations of unfortunate American Jews who have been convinced to walk in lock step with this bogus religion called liberalism. It would be difficult for us to expect them to change or admit error.

What the Trump campaign has shown, however, is that there is a vast silent majority who don’t believe in all of this hogwash. They don’t believe that we should cede territory next to Israeli major population centers to people who want to cut us to pieces with machetes. They don’t believe that America should send their regular citizens back to the stone-age to reduce our carbon footprint while elites still fly around in private jets and so many industrial giants in the rest of the world laugh at us as they pollute to their heart’s desire while giving lip service to climate change.

They don’t believe that somehow we will be considered enlightened if we decide that there is no such thing as bathrooms that are gender specific. It is this silent majority that is craving for real religious values, not the leftist liberal hogwash being pushed down their throats.

We must reach out to them and teach them the real Chanukah story, the real reason the Chashmonaim fought primarily against the Misyavnim, the Hellenists, of that time.

We must identify the real enemy and once again fan that spark of light that will dispel the tremendous darkness that liberalism and leftism have brought to the collective Jewish soul.