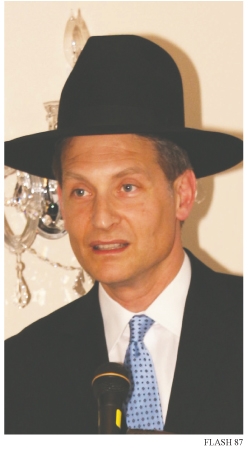 A Talk With Veteran Baal Tefillah R' Avi Sicherman The range of emotions evoked by the Yomim Noraim is quite unique. Think about it. Yomim Tovim usually mean joy, festivities and happiness. Tisha B'Av and other fast days are sad times, as we recall periods of great distress for the Jewish people. But Rosh Hashanah and Yom Kippur stir up a mix of feelings that sometimes seem to contradict each other. Remorse, joy, trepidation, disquiet, festivity, self-awareness. Each sentiment is necessary, nay integral, to our avodah during these holy days.

It is one man’s job to join all these disparate emotions and fuse them into a tapestry of devotion. To harness the intense yearning for closeness to the Ribono Shel Olam, the real desire to change, and the strong expression of gratitude and lift the kehillah to great heights. Meet the baal tefillah.

“It’s an awesome responsibility,” Avi Scherman, who has davened for the amud at Khal Ateres Yeshaya for the last eighteen years. “When I say, ‘Hineni he’ani mima’as,’ it really gets to me. Everything you’re feeling, all the emotions, it’s just right there on the page. That tefillah and Unesaneh Tokef are the high points of the davening for me.”

Davening in Ateres Yeshaya in and of itself can be conducive to proper tefillah. Led by its dynamic rov, Rav Simcha Bunim Cohen, the shul is packed nearly every Shabbos, and the Yomim Noraim are no different. “We have about 350 mispallelim, and that’s just the men. When you daven with such a crowd, you feed off of them too. It adds to the aimasa detzibura.”

On a much more mundane level, davening in a big shul with good acoustics can be a big help for a baal tefillah. “The acoustics we have in shul are quite good, and that’s nicem” says R’ Avi. “I used to daven in other smaller shuls, and with the low ceiling, the sound doesn’t carry that well. Years ago, I would sometimes daven on Shabbos in the Old Shul on Park Avenue and Fourth Street. The shul seems to have been constructed with the acoustics in mind. The davening just flows, and your voice carries beautifully.”

R’ Avi’s first post as a baal tefillah on the Yomim Noraim came very early on, and quite unexpectedly. “I got a phone call from Rabbi Yitzchok Knobel of Woodmere, who had a yeshiva there. I was still a bochur at the time, and he asked me to daven Shacharis and Minchah on Yom Kippur.”

Avi faced a dilemma that many young men with good voices encounter. Do I serve as a shliach tzibbur, where I can inspire and uplift people with my davening, or do I stay in my seat, where I will be able to give the davening my full concentration, without thinking about the next song or the next knaitch?

“At first I turned him down, citing this very reason,” he recalled. “But Rabbi Knobel then told me something incredible b’sheim the mashgiach, Rav Nosson Wachtfogel zt”l. I don’t remember if Rav Nosson was quoting it from someone else or he said it on his own, but what has stayed with me was the actual quote. He said that even if you can’t give the davening your full kavanah, if you are doing it letovas haklal, then the Ribono Shel Olam takes it into account. Your davening is backed by the zechus hatzibbur that draws from your tefillah, and it is that koach that helps your personal avodah as well. In the ensuing years, I’ve heard this from other rabbonim as well. Thankfully, over time, as you get used to davening, it does become a lot easier to concentrate.”

For someone who is musically inclined, learning a nusach isn’t too difficult, as long as it’s not unusually complex. But settling on the one you want to use can be an ordeal.

“I went through stages,” Avi muses. “I grew up davening in the shul of Rav Moshe Bick zt”l, so I began with the nusach I was used to. Over time, I began frequenting shuls with a more yeshivishe makeup. I davened for a while by Rav Chaim Epstein, where Rav Heshy Pincus is the baal tefillah. Their style is decidedly different. So in the early years, I was taking a little from here and a little from there. One year, I was davening in the trailers near Bais Medrash Govoah, and during the break I went over to the vosikin minyan, which had already begun Mussaf. There was an English fellow named Fordsham who served as the baal tefillah, and he just blew me away. Aside from the fact that he had a beautiful voice, I just loved his nusach. Sometime that year, I got a hold of a tape from him and finally settled on that one. I do change some of the songs from year to year, incorporating some of the contemporary songs people like, but lots of times the crowd likes the old ones better. It’s really a mix. I have some Bentzion Shenker songs, some Carlebachs. So those are really the only things that tend to vary from year to year.”

How does he prepare for each new season?

“As you get to know it better, you don’t really need to practice much. I go over the songs to make sure I know them well and they flow nicely. But otherwise, there isn’t much preparation needed.”

What about voice lessons? Does every baal tefillah need a voice coach?

“I never took in the beginning,” says Avi, “but I began to get hoarse, and I decided that it was a good idea. My first try was not successful. My instructor was out of town and I didn’t complete the regimen, so all it succeeded in doing was messing me up. With the new way I was using my voice, I began to get hoarse from a regular Shabbos davening. But then I went to Avrohom Weingarten, Lakewood’s famed voice teacher, and he really straightened me out. Using your voice properly is a melachah, and he trained me to do it right. So for me, those lessons were a big help.”

Do the long hours of standing on his feet bother him?

“Not at all,” is his retort. “I always say that the three hours or so that I’m davening for the amud are the quickest three hours of the fast for me on Yom Kippur. It’s the other tefillos that seem to take much longer! I don’t know why, but honestly, it’s not a factor.”

As a baal tefillah, he is free to minimize it. But for us, sitting out there in the crowd, we can appreciate the hard work and intense avodah that goes into making the davening an inspiring one. And for that, Avi Scherman, and every other shliach tzibbur, deserve our eternal thanks.