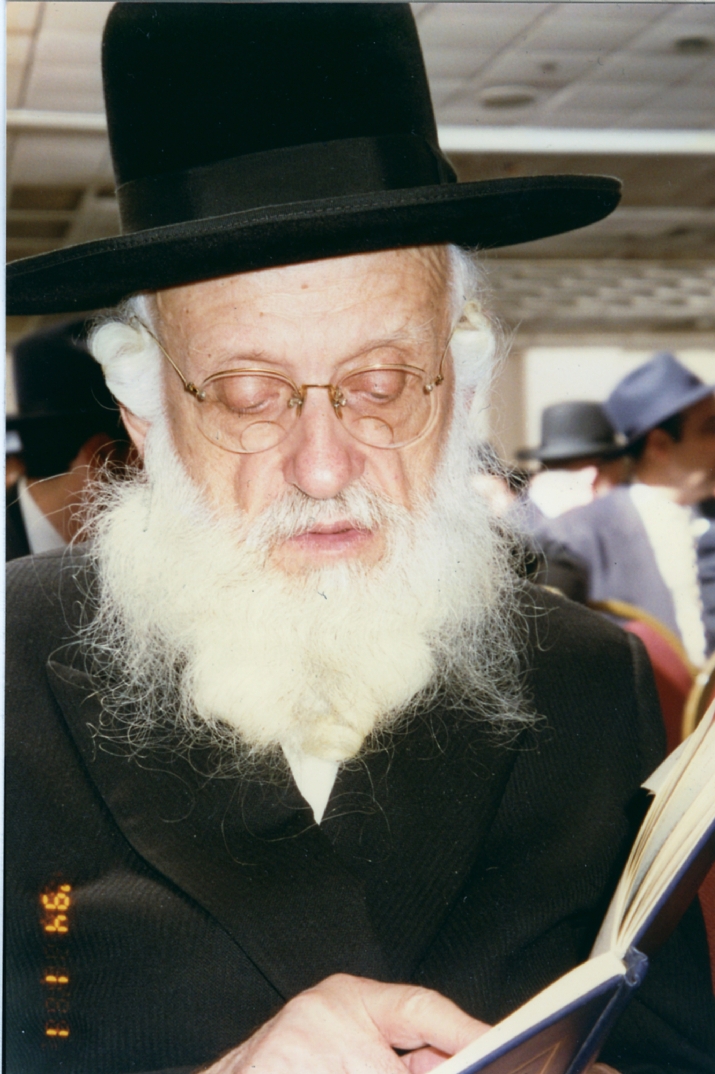 The Shomer Shabbos Shul, located on Thirteenth Avenue in Boro Park, where there are minyanim literally around the clock, is world famous. [Actually, there are only two hours of the day when the shul is relatively quiet: from three to five a.m.] Who hasn't been to Boro Park and stopped by to catch a minyan in this centrally located shul, where everyone is always welcome, a plethora of shiurim abound, and Jews of all stripes can enjoy hot coffee and cake at all hours? The iconic shul was led for decades by an unassuming, self-effacing leader, a gadol baTorah who served at the helm of perhaps the most famous shul in the country. Rav Yehudah Tirnauer ztâ€l, the revered and beloved rov of the Boro Park landmark, was niftar last week at the age of 88.

Rav Tirnauer, a humble yet powerful leader, who delivered a phenomenally popular daily shiur until weeks before his petirah, was a leader and a visionary par excellence.

The neighborhood didn’t always look the way it does today.

Sadly, years ago, many otherwise well-meaning Jews were forced to choose between their livelihood and shemiras Shabbos. It was a difficult nisayon, overcome by a select few with tremendous mesirus nefesh who lost their jobs every week. They were told by their bosses on Friday afternoon, “If you don’t come in on Saturday, don’t bother showing up on Monday.”

Week after week, they would trudge through the streets, looking for work, starting the difficult process all over again. Inevitably, many weaker-willed men gave up the struggle and woke up early on Shabbos morning to daven vasikin. Then, with tears in their eyes and an ache in their heart, they would go to work and come home late in the evening to have their Shabbos meal. This was the tragic nisayon in America during the early 1900s, responsible for so many lost neshamos.

The Yidden who unfortunately weren’t able to withstand the nisyonos of the time would daven at 6:30 on Shabbos morning so that they could get to work on time. There was a group of Yidden, however, who did not go to work on Shabbos and wished to daven in a minyan of only shomrei Shabbos and only those who were makpid on taharas hamishpacha. A 9 a.m. minyan was established each Shabbos by these Yidden, and thus the minyan became known as Shomer Shabbos Anshei Sefard.

At first, the Shomer Shabbos Shul met in the basement of Yeshiva Eitz Chaim, until it outgrew the premises in 1922 and bought its current building for six thousand dollars. It was a fortune in those days, an old-time member related.

“In 1945, we finally paid off our mortgage,” recalls one of the founders. “From then on, the shul began to flourish. But it wasn’t until 1975, when Rav Tirnauer became our rov, that Shomer Shabbos achieved its reputation.”

Born in 1923 in Bergsas, Hungary, Rav Tirnauer, who escaped to America in 1939 on the proverbial last boat out before the war, was a unique individual. In those days of rampant anti-Semitism and fear of standing out, he wasn’t embarrassed to wear his Chassidishe levush in the street. People mocked him and he was lampooned, but the rov continued to wear his garb proudly. Public opinion meant little to him, as did the lure of society. Rav Yehudah was forged of stronger stuff.

A renowned baal darshan and charismatic leader, Rav Tirnauer served as the rov of Congregation Nodah B’Yehudah in Washington Heights through the 1960s and half of the ‘70s. In 1975, as the neighborhood changed and the streets became dangerous, the rov decided that he had to move to Brooklyn. At the same time, the Shomer Shabbos Shul was searching for a qualified rov. It was, as they say, a shidduch made in heaven.

“The president, Reb Shmuel Chaim Shechter, urged the board to consider Rav Tirnauer for the position,” said one askan. “Yet, not everyone was interested in a rov from the old country. The shul held a vote, and 100 mispallelim showed up. I remember the scene like it happened yesterday. They held a vote and fifty people voted for the rov – while fifty were against. The president, whose tafkid in life must have been to bring the rov, cast the deciding vote, and Rav Tirnauer was offered the position.”

Within a few weeks, his most ardent detractors were apologetic, realizing what a diamond they had almost allowed to slip through their fingers.

“The rov rejuvenated the kehillah,” recalls another longtime mispallel. “He was warm and caring, a generous baal tzedakah, and a powerful leader at the same time. He pursued shalom, yet he wasn’t afraid to stand up for the truth.”

This unique strength of reaching out to everyone with a smile and warm words of encouragement, while enforcing an elevated standard within the shul, was part and parcel of Rav Tirnauer’s personality.

“He would meet with women of the community who needed someone to talk you and greet them respectfully,” recalled one woman. “He was so modest and refined, yet you could feel his caring and warmth.”

“He never used negative terminology,” said another admirer. “It was always, ‘Would this be a good way to do it?’ instead of ‘You’re doing it wrong.’ Everything about the rov was always positive and encouraging. He was a true man of peace.

“When you were in his presence,” attested the longtime mispallel, “it demanded something from you. You couldn’t dream of speaking in shul or acting a certain way in the presence of such a tzaddik.”

“Rav Tirnauer was a unique blend of the old versus the new, a rov from ‘amol’ who had the know-how and gefil to connect to the needs of today’s generation. He was called upon to pasken complicated shailos which required experience and tact, both of which he possessed in abundance,” said the mispallel.

Rav Tirnauer counseled many couples in shalom bayis and was renowned for his clarity of vision and his determination that shalom prevail. He was also called upon to broker agreements between prominent personalities, which he accomplished with tact and delicacy.

In addition to his duties as rov, which included a daily shiur (in the early days, when the rov gave a shiur, minyanim were held next door at Rav Stern’s shul), Rav Tirnauer also served for decades as a maggid shiur at Yeshivas Chasan Sofer. A talented and charismatic maggid shiur, the rov managed to seamlessly blend chinuch and rabbonus, giving his kochos to both callings.

Those who knew him well testified that he didn’t waste time, using every spare minute, when not occupied with the demands of the klal, to learn.

As the years passed, the Shomer Shabbos Shul grew into one of the most popular – and perhaps the busiest – shul in the United States, with thousands of mispallelim davening there in any particular week.

Rav Tirnauer was a generous baal tzedakah, who often made appeals in his shul for those who needed assistance, regardless of where they came from. Every year, before Pesach, he raised hundreds of thousands of dollars for ma’os chittim. No one was treated with suspicion or given ‘second class status,’ no matter how decrepit or feeble. Every single Yid is a tzelem elokim and was treated as such by the rov.

What made the Shomer Shabbos Shul merit the zechus of being ‘the’ address for so many minyanim and “Amein Yehei Shmei Rabbahs” in Brooklyn? At least one member feels it was the zechus of mesirus nefesh for Shabbos in the early days, and the rov’s sterling example.

“Rav Tirnauer went out of his way to greet everyone warmly and make every single Yid feel welcome,” said the mispallel. “It isn’t a coincidence that Shomer Shabbos has achieved such an enviable reputation.”

Rav Tirnauer continued giving the daily shiur, which grew in popularity, until a short while before his petirah. As his eyesight declined, faithful shiur attendees made large-sized copies of the Gemara at a copy center around the corner from the shul. Rav Tirnauer would begin with Mishnah Berurah and continue with Gemara. The rov had a knack for making the most complicated sugyos appear simple and clear-cut.

Eventually, he was unable to continue the shiur due to ill health.

During the final weeks before his petirah, as his condition worsened, Rav Tirnauer had barely any strength to speak. “Yet, he still insisted on telling my husband a devar Torah,” said the wife of one mispallel. “Later on, he wasn’t able to say a devar Torah, but he was able to listen. And then, when his condition worsened, he was too weak to even do that, but he still found the koach to ask about a relative of ours who was going through a hard time.”

Last Thursday, 6Adar I, Rav Tirnauer was niftar, leaving his kehillah bereft. He is survived by his second rebbetzin (his first rebbetzin, daughter of the Chuster Rebbe, passed away about fifteen years ago) three sons and four daughters, all of them raising prominent families of Bnei Torah following in his lofty footsteps. His children are Rav Elimelech Tirnauer, a maggid shiur in Tosh; Rav Yaakov Shimshon Tirnauer, Chuster Rebbe of Williamsburg; Rav Yitzchok Eizik Tirnauer, rav hatzair of the Shomer Shabbos Shul who has succeeded his father; Rebbetzin Baila Paneth, Rebbetzin Rochel Weiss, Rebbetzin Leah Mindel Landau and Rebbetzin Miriam Miller.

Kevurah took place at the bais hakevaros in Deans, NJ.