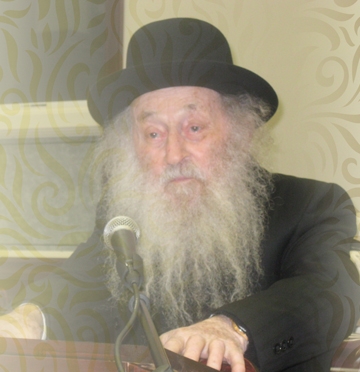 With the passing of Rav Yechiel Nisselbaum ztâ€l this week, Klal Yisroel lost one of the last living connections to the Chofetz Chaim. Rav Nisselbaum was a special oveid Hashem who, deep into old age, continued to serve Hashem with all of his strength and transmit the lessons and unique flavor of Yiddishkeit that he imbibed while learning in the great Torah centers of Radin, Kobrin and Pruzhan.

Rav Yechiel was born in the city of Maltch to Rabbi and Mrs. Dov Nisselbaum just after the end of World War I. As a child, he learned at the yeshivos of Kobrin and Pruzhan before joining the Radin Yeshiva. In Radin, he subsisted during his first year in the yeshiva on bread and water, because the yeshiva did not have enough money to officially take him in as a talmid.

“When I came to Radin, I gave him shalom aleichem. During those times, we did not have enough seichel to ask for brachos. People were not accustomed to running for brachos like they are today. A year later, I went to ask him for a brachah when my father was sick and my father asked me to go to the Chofetz Chaim to get a brachah. I went to the Chofetz Chaim’s house. When I entered, he was sitting with a sefer. His meshamesh was Rav Leib Slonimer, who was a bochur at the time. I told Rav Leib that I had received a letter from home that my father is very sick and that they would like me to ask the Chofetz Chaim to daven for him.

“Rav Leib went to the Chofetz Chaim, who was already hard of hearing, and he spoke into his ear loudly, saying, ‘This bochur, who learns by us in yeshiva, has great tzaar, great agmas nefesh, and his learning is being affected because his father is sick.’ Rav Leib knew that the way to entice the Chofetz Chaim, the way to get a good brachah from him, was to tell him that the issue is affecting a bochur’s learning. He continued explaining that my father was very, very sick and we wanted the rebbe to daven for him.

“The meshamesh understood what this must mean. I, however, a young bochur’l, couldn’t understand why, despite the fact that he was told twice about my father’s plight, he had not answered and why he had blessed me. I left the Chofetz Chaim’s home eivel vachafuy rosh, but what could I do? He wouldn’t give a brachah for my father!

“Soon thereafter, I received another letter, summoning me home immediately, because my father’s life was in mortal danger. I left. It was before Purim. I came to my father, spent some time with him, and then returned to yeshiva. When I came home for Pesach, I was already saying Kaddish.

“Rav Leib Slonimer told me that he understood that the first time, when the Chofetz Chaim did not say anything, the gezeirah had already been sealed and could not be rescinded.”

Rav Nisselbaum described another time he merited receiving a brachah from the Chofetz Chaim:

“When the Chofetz Chaim was older, he was unable to walk to yeshiva to daven anymore. They therefore made a minyan for him in his house. Each day, a minyan of bochurim would come to his house to daven. I would also go fairly often. One day, I walked into the house and he was sitting by his table. I heard the Chofetz Chaim shouting, ‘Feigele! Feigele!’ Feigele was his daughter, Rebbetzin Faiga Zaks, the rebbetzin of Rav Mendel Zaks, who served as rosh yeshiva in Radin. I went to the rebbetzin to tell her, ‘The rebbe wants something.’ She replied, ‘Oh, yes! I forgot to give him his tallis and tefillin!’ The rebbetzin directed me to a shelf on which the tallis and tefillin rested. I took them and brought them to the Chofetz Chaim. My hands were shaking from yiras haromemus, from fear of being so close to greatness and serving the gadol hador and the tzaddik hador.

“I returned to my place. The Chofetz Chaim then took out his gartel. The gartel was very long…and the Chofetz Chaim tried to put it around himself and did not succeed. He simply couldn’t get his hand around. I was watching from the corner, but I was afraid to go and help. As I watched and realized that he was unable to do it himself, I felt that I really had to go help. I ran over to him, again shaking from fear, and asked if I could help him put on the gartel. He told me to double it over so it won’t be so long. Then I wrapped the gartel around him. He looked me in the eye and exclaimed, ‘Ir zolt zein gezunt! You should be healthy!’

“I don’t even remember if I said amein, because I was so nisragesh.

“Years later, when I was imprisoned in Siberia and other camps, wherever I went and was in danger, I remembered his brachah. I always knew that I would somehow be saved. After all, I had a brachah from the Chofetz Chaim!”

He remained in Radin for seven years after the Chofetz Chaim’s passing until the outbreak of World War II.

During the war, he experienced great miracles in Siberia and, despite the impossible conditions, he was able to survive and even put on tefillin every day with great mesirus nefesh. Rav Nisselbaum always attributed his miraculous survival during the war and his very advanced age and lucidness to the brachos he received from the Chofetz Chaim.

During World War II, when the Russians entered the war on the side of the Allies, they set the Polish prisoners free and almost all of them made their way to Central Asia. Rav Yechiel traveled for weeks until he settled in Jallibad, a large central Asia city.

After surviving years of travail in Siberia and Central Asia, Rav Yechiel was finally able to leave Russia as a result of an agreement between Poland and Russia. The agreement dictated that all Polish citizens be repatriated to Poland. From there, Rav Yechiel eventually ended up with many other bochurim in France, where a group of bnei yeshiva had gathered. They lived together and waited for visas to the United States.

Rav Yechiel ultimately settled in the United States, where he raised a beautiful family of bnei and bnos Torah. He served for decades as the shamash of the Shomrei Emunah shul in Boro Park.

The levayah was held at Shomrei Hadas Chapels in Boro Park on Monday afternoon.