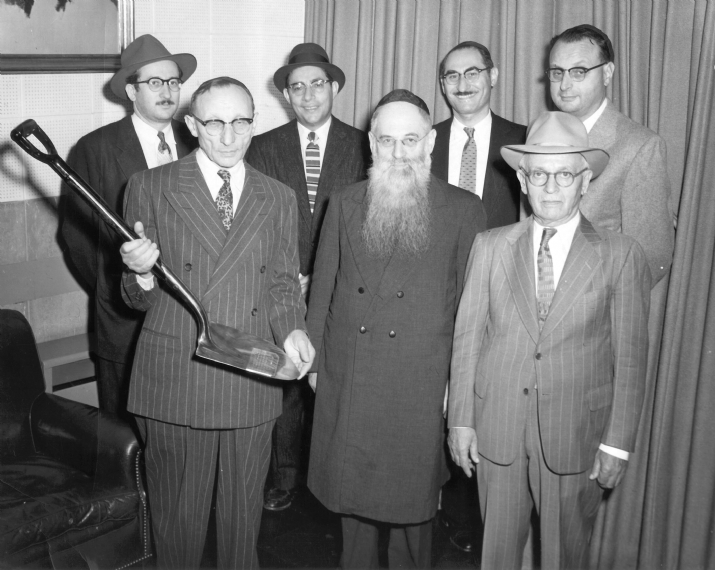 The majesty. The malchus. It was Kelm. And it was him. Rav Nachum Zev Dessler ztâ€l personified the place from whence he came. Nearly 70 years ago, when no one thought it possible, he spent a summer lobbying, begging and pleading with parents to place their trust in him, as he was set to carry out the impossible: fortify and strengthen a fledgling Jewish day school in Cleveland, Ohio.

Now, it seems obvious. How can a community survive without a Jewish day school? But it was not so obvious to the entirety of American Jewry of the early 1940s. In fact, it seemed ludicrous. But one man stood above the fray. He weathered the mockery and scorn of the parents who told him it would never work. And today, Torah Jewry in America has Rav Nachum Velvel Dessler to thank. Because without him, it is hard to imagine what the Torah landscape in America would look like.

Determined to make it work, Rabbi Dessler never stopped. Raised in the lap of malchus, the majesty of Kelm, it guided his every move. How fitting it is that he stemmed from Dovid Hamelech. The glory of Malchus Bais Yehudah, carried on by one whose entire life was dedicated to Torah education and Yiddishe kinderlach.

Rashi comments that Yaakov sent Yehudah to Yosef to set up and establish a bais talmud, a school where the children would be able to learn and be protected from the negative influence of Egyptian culture.

Thousands of years later, another prince from the Davidic line would do the same.

Although I am not qualified to properly describe what Rabbi Dessler meant to the city of Cleveland and to Torah chinuch in America, I am privileged to have a very unique perspective. I attended the Hebrew Academy of Cleveland from pre-kindergarten with Morah Rochel Munk until after Rabbi Yitzchak Scheinerman’s class, seventh grade, when I left to attend Telshe Yeshiva.

My parents and in-laws are all Hebrew Academy alumni.

My wife’s grandmother, Mrs. Gertrude Lefkovitz, was Rabbi Dessler’s personal secretary for many years and her husband, Rav Moshe Lefkovitz z”l, worked together with Rabbi Dessler for over 30 years as the Director of Development of the Hebrew Academy.

One can safely say that the Hebrew Academy runs through my veins.

The Academy, as it was called, was the only Jewish day school in Cleveland. It was built with the guidance of the Telzer roshei yeshiva, Rav Elya Meir Bloch zt”l and Rav Muttel Katz zt”l. In fact, their striking impressive portraits always hung in the hallway of the Yavneh building attached to the boys’ school. But there is one other picture which hangs there.

It is the picture of my grandfather, Mr. Herbert (Chaim Isaac) Spero. 70 years ago, he was one of those who followed Rabbi Dessler’s lead. He provided him with unfailing support and sent my Uncle Shmulie z”l to the school in 1944 as one of its first students.

By the time I attended, Rabbi Dessler’s office was in the new Yavneh building. He spent most of his time in that building, while Rabbi Yosef Meisles was assigned to be the principal of the boys’ section. If there was ever a discipline problem, we were sent to Rabbi Meisles.

Although this incident happened 35 years ago, I remember it like it was yesterday. Rabbi Dessler called me over. I walked around his desk and he held onto my hands. He asked me what I did wrong and I told him. He then looked at me and told me something I will never forget: “Yechiel, I knew both of your grandfathers. And I know that they would not approve of such behavior.” At this point, he placed his gentle hand on my cheek and gave me a soft, loving, gletteleh (stroke) across my cheek.

“Don’t let it happen again. Ess past nisht… You don’t want to disappoint them…”

I retold this poignant story at my sheva brachos, hosted by Mr. and Mrs. Reuvein and Naomi Dessler, and, once again, when I had the unique and special privilege of interviewing Rabbi Dessler two months ago for the book on Rav Mordechai Gifter zt”l that I am writing. In truth, I did not know what to expect when I visited him. I was told that he was not well; I hoped to get ten minutes.

He gave me an hour.

With a strong and reassuring demeanor, he presented himself once more in the same princely disposition I was used to. Sharp. Decisive. Determined. He took me on a journey through Kelm and Telz, and he shared with me his incredible escape across Japan. Finally, he dazzled me with stories about the early days of the Hebrew Academy. It was remarkable.

His children asked him repeatedly if he wanted to stop, as they too were amazed at how long our conversation went. But he never wavered.

The perfection of character, the adage of Kelm.

He did not try to duplicate the world of Kelm. He understood too much about American culture to think that it could be duplicated. But he wanted us to know that it existed. And by looking at him, we were able to see it.

Through his father, the brilliant mashgiach, Rav Eliyahu Eliezer Dessler.

And now, through Rav Nachum Zev, another prince, another link in the Malchus Bais Dovid, the majesty of Kelm.

It inspired everything Rabbi Dessler accomplished.

I remember when there was an influx of Russian immigrants who came to the school in the mid-seventies. Some of the boys came to our class. There might have been some who hesitated to take these non-shomer Shabbos children into the school. But Rabbi Dessler was worried about neshamos. And saving them.

For there was one more cry of Yehudah which pierced his soul. “Eich e’eleh el avi vehanaar einenu iti – How can I go back to my father if the child is not with me?” The great baalei mussar see in the homiletic interpretation of this posuk the need of every mechanech to ensure that each child receive the chinuch they need. Every Jewish child is entitled to a Jewish education.

Rabbi Dessler ensured that no child was turned away.

No child was left behind.

Rabbi Dessler valued people, and forged relationships, life-long relationships, with them. He earned their respect, yet never compromised on the standards of Torah to which he had experienced and grown accustomed. No doubt, there will many hundreds, if not thousands, who walk through Rabbi Dessler’s home this week to be menachem avel. Some will be great roshei yeshiva, others will have to put on a yarmulke before they walk in.

Yet, there is one common link between them.

They loved and respected Rabbi Dessler.

Because he gave value and honor to all of them.

Mr. Irving Stone brought Jewish philanthropy to new levels. Rabbi Dessler guided him to help the Academy in never before done ways. He forged relationships with the Federation that helped set the bar for generosity in giving by a Federation.

He was an educator’s educator, a mechanech’s mechanech.

He was the one to whom so many schools turned to for advice.

Drawing on his wisdom, experience and integrity, he taught them and guided them how to build and how to grow. What to do and how to do it.

Rav Shlomo Wolbe zt”l writes about the dichotomy of chinuch – the zriah, the planting, and the binyan, the building.

Rabbi Dessler excelled at both. He was zoreiah, he planted the seedlings for thousands of Jewish children, and then he was boneh, he built for them, and inside of them, skyscrapers of Torah and its wisdom.

Throughout his lifetime, Rabbi Dessler was accompanied and supported by his rebbetzin, who was the devoted preschool principal for many decades. But it is her role as a trusty aishes chayil for which she will be most remembered. She stood by her husband’s side providing loyal support for nearly 70 years.

It must be noted that the Dessler children have given a virtual clinic over the past number of years in how one must treat their parents. The kibbud av va’eim, the dignity and honor, is humbling to watch. Inspiring to see.

And one can see it in their children.

Rav Nachum Velvel Dessler zt”l is gone. But through his magnificent mishpacha and the thousands of children and families whose lives he has touched, Kelm lives on.