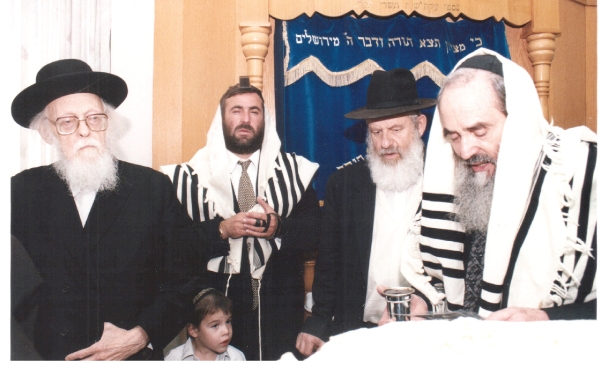 I used to see Rav Shlomo Lorencz ztâ€l almost every day. He lived at 17 Rechov Ponim Meiros in the same building as Rav Uri Zohar, with whom I have maintained a daily learning session over the past 20 years. In his later years, I made it a habit of visiting Rav Lorencz to say hello. Sometimes that â€œhelloâ€ took only a few minutes, while at Â­Â­Â­Â­other times it took longer. He almost always had a good vort to share about something he had learned that morning, and sometimes we engaged in political discussion. I even managed to gain a few interviews from those meetings, although he insisted that they not be published during his lifetime, since he didn't want others to challenge him about the fact that he had agreed for me to interview him but had turned them down.

We had known each other for a long time. As a child, I used to visit his home in the Lorencz orchard in Bnei Brak, which is the location of today’s Ramat Elchonon neighborhood. He was the political leader of the yishuv of Be’er Yaakov, where I was raised. My father zt”l was the mara d’asra there for fifty years.

Rav Lorencz was a member of the Knesset from 1961 to 1984. He was the chairman of the Knesset’s Finance Committee for many years (during the Eighth Ninth, and Tenth Knessets) and was one of the most highly respected members of the Knesset.

In the Knesset’s official records, Rav Lorencz is described as follows: “An activist in Aliyah Bet on behalf of Agudas Yisroel of Hungary (1938-1939), one of the founders of the collective community of Komemiyus in the Lachish region (1948), one of the founders of Agudas Yisroel’s construction and development company (1956), founder and president of the Sdeh Chemed and Chazon Yechezkel children’s villages, chairman of the Yegia Kapayim network of vocational schools, chairman of the council and advisory committee of Bank Yisrael (1987-2002), and member of the administrative council of Chinuch Atzmai.” At his request, I personally added two of his many accomplishments to the list at the end of his life.

His seforim about gedolei Yisroel, titled Bemechitzosom, have been widely distributed and read. They have been translated into English as well. Another sefer that he wrote, Shalmei Shlomo, was printed in a limited edition. Of course, he presented me with a complimentary copy as soon as it came out, complete with a warm inscription. The sefer includes letters that he wrote to a number of gedolim, along with their responses. Among them is a copy of his correspondence with Rav Yosef Shalom Elyashiv zt”l, whose second yahrtzeit is this week and who was a mechutan of Rav Lorencz.

Rav Lorencz told me, “In 5763, I had the privilege of receiving a letter with divrei Torah from Rav Elyashiv. It had been a number of years since he had written, since it took time to write and that time could be put to use for learning. Consequently, Rav Elyashiv decided that he would stop writing letters.”

It is unclear whether this was Rav Lorencz’s own interpretation or he actually heard this from Rav Elyashiv.

“I had sat with him and spoken with him for a long time about a particular subject, and finally I said, ‘If it is easier for the rov, I can summarize the issue in a letter and the rov can respond.’ Rav Elyashiv agreed. Later, he told me that he never responds to anyone in writing, but in this case he did because he had agreed to my suggestion and he wasn’t sure if it was a neder.”

“I have a similar story to tell,” I revealed to Rav Lorencz.

It was the month of Menachem Av, 5756, exactly 18 years ago, and the situation in the country was the same as it is today. The headlines in Haaretz described a study conducted by Peace Now, which had determined that there were about 145,000 Jews residing in “settlements,” including 2,380 in Kiryat Sefer and 4,880 in Beitar Illit.

Ehud Yatom, a senior official in the Shin Bet, had admitted in an interview that he had killed the two terrorists who were captured on a bus in Ashdod, an incident that mushroomed into the “Bus 300 Affair” and remained on the public agenda for many years.

Israel’s foreign minister, David Levi, met at the Erez Crossing with the head of the Palestinian Authority, Yasser Arafat.

There was a bitter conflict between Mafdal and Shas over which party would receive the Religious Affairs portfolio, and each party was threatening the prime minister, Bibi Netanyahu, that it would resign from the government.

The Yediot and Maariv newspapers were enmeshed in a full-scale war, including clandestine eavesdropping and arrests. The bodies of the two missing soldiers, Yosef Fink and Rachamim Alshich, were returned ten years after their capture and were brought to burial in Israel. Violent protests were taking place on Rechov Bar Ilan and the police were beating chareidim mercilessly. Rav Avrohom Ravitz was leading the protestors and was involved in an altercation with Aryeh Amit, the police commander in the Yerushalayim district. The Minister of Police, Avigdor Kahalani, announced that he believed the police had gone too far. The headlines in Maariv proclaimed, “Feverish Efforts to Prevent the Ministers of Mafdal and Shas from Leaving the Government.”

On Tuesday, the 29th of Tammuz, 5756/July 16, 1996, my wife gave birth to a baby boy. Like many other happy new fathers, I hurried to hire the legendary mohel, Reb Yossele (Yosef Dovid) Weisberg zt”l, and to submit a request to Rav Elyashiv’s household for him to be the sandek. Fortunately, my requests were accepted. The bris was scheduled for eight days later, on the seventh of Av, in a shul on Rechov Sorotzkin.

The morning of the bris, I received a telephone call from Rav Chaim Cohen, one of Rav Elyashiv’s closest confidants and his personal driver. “We have a problem,” he said. I imagined that I knew what the problem was: Shas was in the newspaper headlines, and Aryeh Deri, who was the leader of the Shas party, was certainly going to be in attendance at the bris. The media, which was always well aware of where the best photos could be taken, certainly knew that they could find him at the bris that morning. Presumably, Rav Elyashiv did not want to be sandek at a bris where dozens of secular reporters and photographers could be expected to be present.

Nevertheless, I asked, “What is the problem?”

Rav Cohen explained, “Last night, Rav Elyashiv did not feel well and we called a doctor, so his entire schedule was thrown off. On a regular day, he gets up to learn at 2 a.m., and then he lies down to rest after davening. Then he gets up on his own to go to the brissos where he is the sandek. Today, I’m not sure if he will be able to get up on his own at the time the bris is taking place, so I wanted to inform you now that there is a chance he may not come.”

I didn’t know whether I should believe him, but I later learned that everything he said had been completely accurate. He made sure to add that it was possible that Rav Elyashiv would indeed attend the bris. If he got up in time, he would come. But one thing was certain: No one would wake him up!

“Have a backup sandek come,” he replied.

It sounded like a simple solution, but it wasn’t simple at all. It is not very pleasant to tell someone that he will be a sandek “conditionally.” I called my friend Sholi (today known as Rav Sholom) Scheinberg, a grandson of Rav Chaim Pinchos Scheinberg, and shared my dilemma with him. “Is it at all possible that your grandfather would agree to be our backup sandek?” I stammered uncomfortably. Rav Sholom consulted with his grandfather and then returned to the phone. “It is not a problem. My grandfather says that it is not a problem.” Since Rav Scheinberg lived nearby, he asked me to notify him immediately before the bris.

In the end, Rav Scheinberg indeed served as the sandek. Dozens of media photographers swarmed around him and the other dignitaries who received kibbudim, and a picture of Aryeh Deri was plastered across the pages of every newspaper the next day, along with a story about the continuing coalition crisis.

During the bris, I was surprised to see that Rav Chaim Cohen and Rav Yosef Efrati arrived. “We wanted to tell you that the rebbe [Rav Elyashiv] got up, but it was impossible for him to leave the house,” they informed me. “We came here to make sure you realized that this was not a political decision.”

I knew that their arrival had been at Rav Elyashiv’s behest; they did not make a single move without him ordering them to do so. They added, “The rebbe asked us to tell you that he will be the sandek for your next son, be’ezras Hashem.”

Once again, I notified Reb Yossele Weisberg that I needed a mohel and I called Rav Chaim Cohen to ask for Rav Elyashiv to serve as sandek. Once again, I managed to make both calls in time and I received the consent of both parties. The day before the bris, I called Rav Cohen and informed him that the bris was scheduled to take place in the convalescent home in Telz-Stone for mothers after birth.

“Aren’t you aware that the rebbe hasn’t left Yerushalayim for two years already?”

In fact, I had not been aware. Had I known, perhaps I would not have scheduled the bris to take place in Telz-Stone. I tried to remonstrate with him, pointing out that it was only a 15-minute drive from Yerushalayim, but he remained adamant. “The rebbe doesn’t leave the city. Don’t waste your time.”

At that point, I remembered what he had told me three years earlier. “Chaim,” I said, “tell Rav Elyashiv that he himself said three years ago that he would be the sandek for my next son.”

Ultimately, to many people’s astonishment — including Rav Cohen and Rav Efrati — Rav Elyashiv traveled to Telz-Stone and served as the sandek at my son’s bris. The baby was named Yosef Shlomo after the Ponovezher Rov, Rav Yosef Shlomo Kahaneman zt”l.