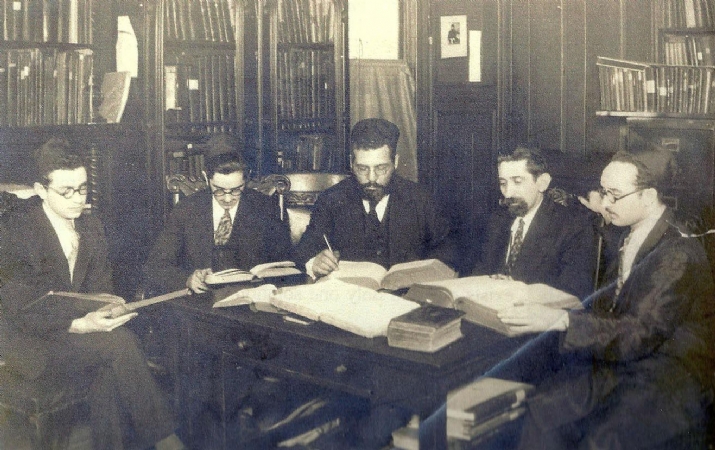 Thirty-two years ago, on 6 Nissan 5739, American Jewry lost a leader and teacher who was the model of the best that American Orthodoxy could produce. Rav Eliyahu Moshe ben Reb Yitzchok Dov Gordon was American-born and raised in the 1920s in Jamaica, Queens. His father was the founder of the Yeshiva of Central Queens and a prominent lay leader of the American Jewish community during the period following the First World War. Young Eliyahu Moshe attended Yeshiva Rabbeinu Yaakov Yosef, fondly known as RJJ, the mother of the American yeshivos, and then the Yeshiva of New Haven, Connecticut, under the renowned talmid chochom and rosh yeshiva, Rav Yehuda Levenberg. Eliyahu Moshe spent almost six years in New Haven developing a close relationship with Rav Levenberg.

In 1929, Eliyahu Moshe was one of a handful of American bochurim who traveled to Poland to learn in the Mir Yeshiva. Included in the select group of pioneers from America were several close friends and future leaders of American and Eretz Yisroel Jewry.

Among these yechidim were Rav Boruch Kaplan, principal of theBais YaakovGirls School in Brooklyn; Rav Sender Linchner, the builder of Boys Town in Yerushalayim; and, ybl”c, Rav Shachne Zohn, former rosh yeshiva at Yeshiva Torah Vodaas, and Rav Chaim Pinchos Scheinberg, rosh yeshiva of Yeshiva Torah Ore in Yerushalayim, who was achavrusah of Rav Eliyahu Moshe. Many of these yechidim also learnt under Rav Levenberg before going to Europe.

The future Rav Gordon, desiring a complete European learning experience, left the Mir to learn for one year in Kamenitz under Rav Boruch Ber Leibowitz zt”l. At that time, there were no other Americans in Kamenitz, and as a smaller makom Torah, it held advantages not found in the Mir.

After receiving semichah from Mir and Kamenitz in 1933 and 1934, Rav Gordon returned to America a true talmid chochom and began his career as a shul rov and mechanech. As the eldest son, Rav Gordon guided his two younger brothers, Yehuda and Shlomo, who followed him to Mir and Kamenitz. Upon his return to the United States, he sent them money and supported their learning for many years.

His first rabbinic position was in Annapolis, Maryland, where he brought his young kallah, tbl”c Tzivia Ralbag, daughter of Rav Aryeh Leib Ralbag, chief rabbi of Coney Island, Brighton Beach and Seagate. It was during his time in Annapolis, so close to Baltimore and Yeshiva Ner Yisroel, that Rav Gordon would regularly visit with Rav Yaakov Yitzchok Ruderman. Aside from talking in learning, Rav Ruderman would advise the young rabbi on the intricacies of dealing with a congregation.

The young rabbi and rebbetzin galvanized the Jewish community of Annapolis. When Rav Gordon arrived in Annapolis, there was no daily minyan, no Talmud Torah and no kashrus supervision. In less than two years, there was a vibrant observant Jewish community, which has continued to develop on that foundation to this day.

At a very young age, Rav Gordon moved from Annapolis to assume the position of rov of Shaare Tefilah in the Bedford-Stuyvesant area of Brooklyn, which between the mid-1930s and the early 1950s, was a center of Jewish life in New York. The shul seated more than 1,500 people and regularly hosted the leading chazzanim of the world, Rosenblatt, Kwartan, Serota and others.

One year after Rav Gordon assumed this rabbinic post, he was visited at home by Rav Yitzchok Hutner, who implored Rav Gordon to give a regular shiur at Mesivta Rabbeinu Chaim Berlin. Rav Gordon delivered shiurim at Mesivta Rabbeinu Chaim Berlin for the next decade to young men who went on to become the leaders of American Orthodoxy, while continuing to be an active pulpit rabbi at the huge shul and Talmud Torah in Brooklyn. In 1948, he was asked to give shiurim at the Talmudical Academy of Brooklyn, where he was a maggid shiur until 1955.

The mid-1940s were a period in our history when picking up the pieces after the devastation of the Holocaust was a main focus of world Jewry. Rav Gordon led his community in assisting Jewish refugees to come to the United States, signing affidavits on their behalf, raising funds for their basic needs, and inspiring his community to do the same.

His younger brother, Shlomo Zalman, was still learning in Poland when the war broke out, but he managed to get back to the United States with his American passport.

As a young rabbi in a large shul of baalei batim from various backgrounds, the ability to keep them on the derech hayoshor was a demanding task. Many of the shul members desperately wanted their children to continue their parents’ dedication to Yiddishkeit, but the younger generation of those days wanted to break away. Rav Gordon – a tall, immaculately dressed, articulate and highly-learned English-speaking rabbi – made a lasting impression on the youngsters of the community.

Rav Gordon was a man who tolerated no compromise. Like his namesake, Eliyahu Hanaovi, he spared no condemnation for those who might be “poseiach al shtei hase’ifim,” who failed to give total commitment to the derech haTorah. His drashos were always filled with Torah insights and with blunt mussar. In personal relations with baalei batim, he was unfailingly gentle, understanding and sensitive. Long before the baal teshuvah movement became popular, Rav Gordon was, with his unique personal openness and integrity, able to return hundreds of young people to the derech haTorah.

One such young man, who credited his remaining in Yeshivas Rabbeinu Chaim Berlin and was always grateful for the influence Rav Gordon had on his life as a teacher and role model, was Rav Shlomo Freifeld, who went on to found and head Yeshiva Sh’or Yoshuvof Far Rockaway. Upon the petirah of Rav Gordon, Rav Freifeld came to speak at the shloshim and related to family and friends his relationship with Rav Gordon and how he influenced his life.

Notwithstanding Rav Gordon’s personal mildness, his public drashos were fiery and he administered tochachah when it was deserved.

He and his family, including my wife, Rivka, and her brothers, Rabbi Arye Don and Eliezer Shmuel Gordon, were virtually the last Jews to leave the infamous Bed-Sty neighborhood, when it became impossible to remain any longer.

In the mid-1950s, Rav Gordon moved to the West Side of Manhattan and became the rov of Congregation Shaare Torah. The heimishe shul on West Seventy-Third Street had some of New York’s most illustrious baalei batim, among them Mr. Stephen Klein, founder of Barton’s Candy and a major force in the creation of Chinuch Atzmai along with his son, ybl”c, George, a well-known supporter of the Jewish community.

Rav Gordon continued to teach and inspire young and old until he was taken to the Olam Ha’emes at a tragically early age. He was a rov on Manhattan’s West Side for over 25 years. He rests now on Har Hazeisim. His many accomplishments and the maasim tovim of his talmidim are an eternal matzeivah to his memory.