Rav Chaim Kanievsky zt”l, In His Own Words 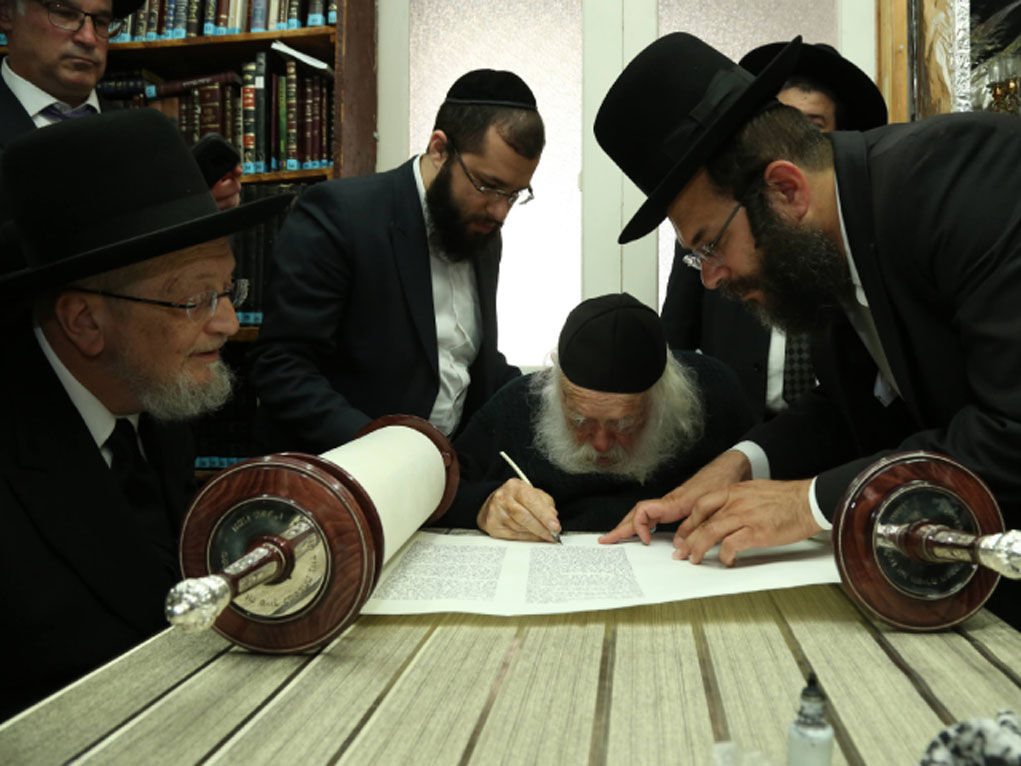 We are all devastated.

On the one hand, it is forbidden not to offer proper words of hesped for a talmid chochom, all the more so the gadol hador. And yet, I feel too unworthy to attempt anything approaching a eulogy. It is because I had the privilege of being in his midst that I know that Chazal’s words about the dog licking the ocean (Sanhedrin 68a) would apply to anything I could possibly write or say. I have therefore decided to let the gaon speak for himself.

Many of his close talmidim have published, with his approbation, his words on the siddur, machzor, and other tefillos. These are replete with insights into that particular tefillah itself, but also serve as a tiny window into his wisdom on many aspects of our lives, especially on learning Torah and our relationship with Hashem. One of the characteristic things to watch for here is the sources. Rav Chaim not only found a makor for everything, but insisted that this teaches us a lesson about Chazal and all of our tefillos. They are not mere poems or inspirational songs. They are rooted in nevuah and other teachings that come directly from Hashem. I humbly present this selection in lieu of anything that might be called a hesped or even tribute.

The beginning and end of anything by or about Rav Chaim must relate to Torah. Let us listen, therefore, to his take on Birkas HaTorah. He quotes his father, the Steipler, in his Kehillos Yaakov (Brachos No. 22) that this blessing is actually a birkas hanehenin, a brocha on pleasure. Rav Chaim raises the question: “Why don’t we expand our requests here to the list we find in Ahavah Rabbah? These would include the ability to understand and comprehend all aspects of Torah.” He answers, pithily and memorably as usual, that once we asked and received the blessing of learning Torah in sweetness, “veha’arev na,” we need not ask for more, because “one who learns with sweetness automatically understands.” He sources this with a Medrash (Tanna Devei Eliyahu 18):

“As long as Torah scholars study in the bais medrash and the Torah is sweet to them, Hashem has compassion for them and grants them wisdom, knowledge, etc.” Surely, that was the Rav Chaim we all knew and saw. Would that we could all learn Torah with that degree of endearment and utter abject love.

There is another universal lesson Rav Chaim gleaned for us all from Birkas HaTorah. He pointed out that we ask in this blessing for ourselves and our children that we should all be lomdei Torasecha. He notes that it doesn’t mention anything about becoming talmidei chachomim, Torah scholars, only that we should learn Torah. His conclusion is that even if not everyone can become a talmid chochom, everyone can and must certainly learn Torah. We must remember that this interpretation comes from one who mastered virtually every conceivable section and aspect of the Torah. Indeed, his annual regimen called for completing all of the Written and Oral Torah. Yet, he includes every single Jew in the basic mandate to sit and learn Torah as much and as often as he possibly can. This both magnificent and magnanimous interpretation should give all of us encouragement and chizuk to try our very best to learn what we are able on our own level. That is the true Birkas HaTorah with which Rav Chaim wants us to start each day.

Every rov knows that he can wake up a sleepy congregation with the promise of a segulah for parnassah. Yet, Rav Chaim, in a characteristically brief comment, offers us one of the easiest paths to riches. We sing in Lecha Dodi every Friday night that Shabbos “is mekor habrocha – the source of blessing.” Rav Chaim references the Medrash (Bereishis Rabbah 11) that blessing here refers to material wealth, which flows from honoring Shabbos. Simple, elegant, yet compelling, because it has the imprimatur of absolute truth.

One of Rav Chaim’s most original and illuminating seforim is his commentary on Perek Shirah. Citing his customary plethora of sources, he goes to the heart of each creature mentioned and why its particular song is reflected specifically in that posuk. In the process, he provides incredible chizuk from the most surprising of creations and the verse that conveys their essence. One example from the world of vegetation is the song of the wheat. Its posuk is one of those we recite when we are often in despair and profound pain: “Shir Hamaalos. From the depths I called You, Hashem” (Tehillim 130). Perek Shirah (3:28) declares this to be the song of the wheat. Rav Chaim vividly describes what happens to the wheat seed: “It is thrown into the ground, disintegrates, rots and disappears in the earth. Then it emerges as a kernel of wonderful wheat. This demonstrates to a person that even if he has sunk to the lowest part of the earth and is in utter despair, he should call out to Hashem, Who will raise him up and make him succeed like the little seed which seems to have been completely obliterated.”

While we are on Rav Chaim’s commentary to Perek Shirah and as we approach the Yom Tov of Pesach, let’s let Rav Chaim prepare us for both the daily Krias Shema and the Seder ahead. After reciting Shema, we say the words “Boruch Sheim kevod malchuso le’olam va’ed.” Perek Shirah (end of chapter 4) reveals that these words are the embodiment of the frog. Rav Chaim explains that the frog is constantly croaking, never stopping for a moment. He sees this as a fulfillment of the words of the holy Zohar (Pinchos 232b) that “a person must spend his life praising Hashem.” I don’t think that it is an exaggeration to say that Rav Chaim is both a role model and was an example for almost a century of this ideal. He radiated kavod haBorei, glorification of Hashem, in every single word and action of his amazing life.

I must conclude with one of Rav Chaim’s explanations in conjunction with Purim, the day it was commemorated this year in Yerushalayim on the day of his petirah. Its originality and sources mirror and illustrate everything he said and wrote. However, there is both a cautionary and optimistic note for all who loved and revered him. We sing in the famous Purim pizmon, Shoshanas Yaakov, that “Charvonah, too, be remembered for good.” Rav Chaim points out that the first time Charvonah is mentioned in the Megillah (1:10), his name is spelled with an alef at the end. However, later (7:9), his name ends with the letter hey. Why this discrepancy? Rav Chaim cites the halacha (Shulchan Aruch, Even Ha’ezer 129:34) that while Hebrew names end in a hey, those spelled in other languages end in an alef. Rav Chaim refers us to the Targum, which teaches that Charvonah bore that name because he was in charge of churbanos, meaning his role in the Persian empire was to bring about destruction when it so pleased the rulers. However, since in the end he was instrumental in bringing about the destruction of Haman and his household, he merited having his name changed to the Lashon Hakodesh version, which ends in a hey. The havoc he wreaked was for our benefit, and so he is indeed zochur latov.

Beautiful? Undoubtedly. But it also helps us with a conundrum we face upon the gaon’s petirah. Another of the ziknei hador, Rav Moshe Sternbuch, mentioned in a hesped the words of Chazal (Rosh Hashanah 18a) that “the passing of a tzaddik is as tragic as the destruction of the Bais Hamikdosh.” He added another Medrash (Eicha) that it is as devastating as the 98 curses enumerated in the Tochacha. This is certainly frightening and shattering. Yet, we also know that the “death of tzaddikim brings forgiveness and expiation” (Moed Koton 28a). So how do we reconcile these two seeming contradictions?

I think the answer may be hidden in Rav Chaim’s words about Charvonah’s name change. If we are truly shaken up by the loss and are walking around brokenhearted over the tragedy, then there is hope. This is the time to make realistic commitments to improve, especially in the areas Rav Chaim taught by example. We must add at least a bit to our daily learning. We must try to improve our middos in line with the guidance Rav Chaim offered in his masterpiece Orchos Yosher. We must try to emulate Rav Chaim’s incredible dedication to davening for every single Jew in pain or suffering, which he fulfilled despite his famous “obligations” in learning. There is so much more that we can accomplish if we each just become a bit better now that Klal Yisroel has lost so much. Then, hopefully, his petirah will reflect the Gemara in Moed Koton more than the dire warnings of the words in Rosh Hashanah. It is up to us and we were all fortunate enough to live in the same world as the malach who walked the earth, Rav Shmaryahu Yosef Chaim Kanievsky, zeicher tzaddik vekodosh livrocha.