Rand Paul Calls for Realpolitik in US MidEast Policy 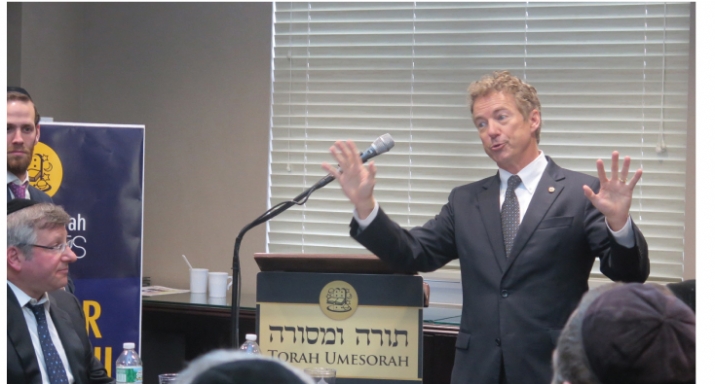 Senator Rand Paul, a candidate for the GOP presidential nomination, met Monday with about Orthodox leaders at the Torah Umesorah office in Brooklyn, to share his views on Middle East policy and other issues of concern to the community.

Senator Paul reiterated his deep respect for Jewish values to which he was introduced during his first visit to Israel in 2013. Since then, Paul has been outspoken in his support for Israel. He spoke warmly and enthusiastically about Israel as one of America’s “best allies and best friends around the world. They’re the only democracy in the Middle East. And I’m very supportive.”

He took the lead in calling for the suspension of US aid to the Palestinian Authority who have attacked Israel’s standing in the international community and undermined Israel’s good faith efforts to reach a negotiated peace agreement. Paul noted that “AIPAC doesn’t support me on the bill,” to halt aid to the PA. “In fact, they lobbied against me on the bill prompting [Senate Majority Leader] Mitch [McConnell to quote] the saying ‘Two Jews, three opinions?’”

Paul denied allegations by some of his GOP opponents that he is an isolationist. At the same time, he said that Israel would be stronger if it could rid itself one day of its dependence upon US military aid and its spending restrictions. But he quickly added, “I’m also not saying that it has to end now.”

UNINTENDED CONSEQUENCES OF US MILITARY ACTIONS

Paul said that recent efforts by the US to intervene militarily in the Middle East had unintended consequences, leading to the rise of ISIS and other forms of Islamic terrorism. He believes that the US-led invasion of Iraq, which toppled Saddam Hussein in 2003, was a “mistake.” Hussein was the bulwark against Iran. . . now Iraq is a vassal state for Iran. I’m worried [Iran] is twice as strong as it was before the Iraq War,” Paul said.

Paul also condemned “Hillary Clinton’s war in Libya which is, was, and continues to be an utter disaster. Qaddafi wasn’t a good guy but he suppressed radical Islam. Now that Qaddafi is gone, the country is in civil war, the ambassador was killed, our consulate in Benghazi sacked, our embassy fled… the country is divided and a third of the country supports ISIS.”

“Each time we topple a secular dictator, I think we wind up with chaos and radical Islam seems to rise,” Paul said. He argued that any attempt by the US to remove Syrian dictator Bashar Assad from power would ultimately result in ISIS, being “in charge of Damascus.”

SEEKING A BETTER ALTERNATIVE TO WAR WITH IRAN

With regard to the proposed nuclear deal with Iran, Paul said that a realpolitik US approach to the problem was preferable to starting a war with Iran. Along with 46 other Republican senators, Paul signed the letter sent to the leaders of Iran warning them that any deal they make with Obama would need congressional support in order to last. He claimed that the letter actually strengthened the hand of the administration in negotiating the deal with Iran.

With respect to Iran’s rogue nuclear program, Paul said, “the interim agreement that we are under now, while not perfect, is better than no agreement and no inspections.” He said he agrees with Prime Minister Netanyahu’s position, when he told Congress in March, “I’m for negotiations as opposed to war.” Paul disagrees with those who, “I think, frankly, have a simplistic understanding of this, who think war is the only option. I still think there are other options. That doesn’t mean I favor a bad deal, though.”

“I will tell you, the most worrisome statement was the president’s spokesman last week saying, ‘Well, of course they’ll probably still be involved in a little terrorism,'” said Paul. “And it’s like, how are we to believe the agreement, if they’re really going to try to be part of the civilized world and not have a nuclear weapon if they’re just going to dabble in a little bit of terrorism?”

Paul does not believe that bombing Iran would solve the nuclear problem, and could even make it worse. “It could be that it steels their resolve and they have a nuclear weapon within a year,” he said. He expressed his discomfort with a statement by the White House spokesman that the administration would be willing to sign a nuclear deal with Iran while it is “still involved in a little terrorism.” Paul says that as long as Iran continues to support terrorism, its word could not be trusted.

His ideal solution to the instability in the Middle East is to inspire the countries of the region to fight Islamic extremism on their own. He advocates granting support and autonomy to each of the region’s ethnic groups, including Kurds, Sunnis and Shiites, rather than seeking to solve the region’s problems with American guns.

“This is absurd, but think about if we sent the Orthodox community over to fight them,” he said. “You think they’d be happy about the Orthodox community being the new government in Mosul? No, that would be absurd,” Pail said, explaining why he thought the Kurds, Shiites, and Sunnis should be supported to achieve autonomy and fight their own battles.

Senator Paul has been working on growing a relationship with the Orthodox community. Dr. Rich Roberts of Lakewood recalled that during his first meeting with Paul at the Republican National Convention in 2012, they “disagreed on several topics. Even though we disagreed, I find Rand to be someone of tremendous intellectual honesty. He has a thirst for knowledge and he was just happy to speak to someone who wasn’t just a yes man.”

Roberts and Rabbi Nate Segal served as Paul’s guides during his 2013 visit to Israel. Roberts said the Israel visit helped Paul to “refine some of his positions as he gained more information.”

In his talk with the Orthodox leaders in Brooklyn on Monday, Paul fondly recalled his first Shabbos meal, held in the Plaza Hotel in Yerushalayim, with Segal, Roberts and others.

PAUL A FRIEND OF THE JEWS AND ISRAEL

Since that time, Rand Paul’s words and actions reflecting his respect for Jewish tradition and support for Israel has distanced him from the unfortunate reputation of his father, libertarian Congressman Ron Paul, for associating with anti-Semitic groups. Yated Ne’eman publisher Rabbi Pinchos Lipschutz, urged Paul to do more to make it clearer to the Jewish community that he is its friend. Paul responded that his reputation has suffered because his political rivals have deliberately distorted his position on Israel. However, he said, that is less of a problem than it was a few years ago, “before people knew me. All I can do is keep saying what I believe in and then, ultimately, hopefully, people come to the truth.” He was applauded when he spoke of his pro-Israel votes and expressed his admiration for Israel.