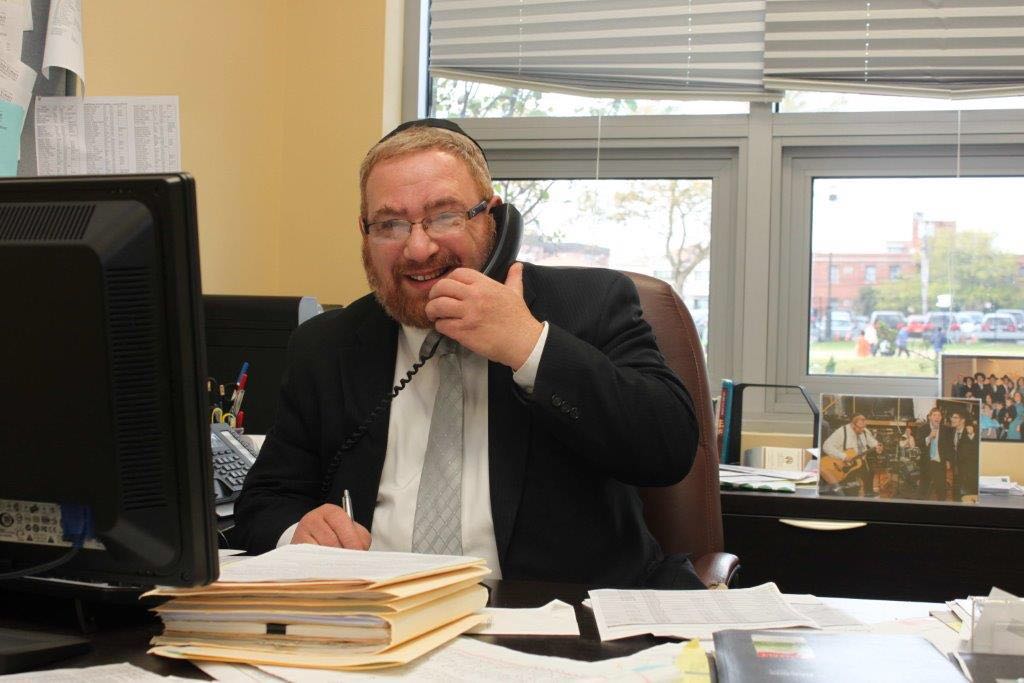 The sudden passing of Rabbi Yehuda Harbater has left the Bayswater, Far Rockaway, and Five Towns communities bereft. He was well known in the community as the Executive Director of Yeshiva Darchei Torah, expertly navigating the relationship between the parent body and the administration with care and compassion. He was also a loving and caring family man, a devoted chavrusa, a loyal friend, and a talmid chochom.

Rabbi Harbater, known to his friends as Yudi, was born and bred in Far Rockaway, where his parents settled in the 1930s. His siblings, Michael and Rena (now Hershberg), still live in the area. At that time, the Harbaters were pioneers in the community, and Rabbi Harbater would take the bus to Yeshivas Ohr Yisroel in Queens every day. Classmates remember him as being bright and clever, coming in first place at a poetry elocution competition. He later attended Yeshiva Toras Chaim in Denver as well as Mir Yerushalayim. He married Shira Heifetz from Cleveland and the couple settled in Bayswater.

Rabbi Harbater’s role as Executive Director of Darchei Torah goes back thirty-three years. Here is where his qualities of mastering “chinuch with heart” truly shine. Mrs. Lynne Gordon, secretary at the Yeshiva, says “He came to YDT straight out of kollel.  His job started with day to day banking, collections, etc.  Then, as the Yeshiva grew, he became the tuition czar and was a colleague sharing ideas and methods with Executive Directors of other local Yeshivas.”

Mr. Alon Goldberger, a yeshiva board member, says, “He had an incredible sense of humor, but he took his achrayus very seriously. He dealt with each family with rachamim and understanding. He approached every situation by weighing both sides of the equation. And at the same time he managed to be well liked by every parent he dealt with.”

According to one parent, “He had this way of speaking that you never felt he was challenging you or asking invasive questions. He would say, ‘Be honest with me. Let me know what you can afford. We know you have other responsibilities.’ You took ownership of what you could afford and he would work with you.”

Donny Miller is a parent who eventually became Rabbi Harbater’s chavrusa and dear friend. “I was a young parent in the yeshiva,” says Miller, “and I called to complain about something. Not only did he solve my issue, but he turned me around into assuming an advisory capacity at the yeshiva. He told me, ‘Come join us and make a difference.’ And I did. And that’s how our chavrusashaft began.”

“He was in a difficult position,” says Miller. “An executive director is basically somebody whose job is to get people to pay a lot of money. And yet people enjoyed talking to him. They didn’t avoid him. The minute they met him, he became a friend. I’ve never seen a relationship like that between an executive director and parents of a yeshiva.”

He did his work with compassion. If a parent lost his job, says Miller, “he would tell them he’s freezing all tuition payments. ‘Call me back when you get a new job and then we’ll talk. Until then, don’t even think about it.’ That took a tremendous pressure off the family.”

The yeshiva grew by leaps and bounds, and the job was all consuming. “Even in the summer,” says Miller, “he worked eighteen hours a day. He rarely took a vacation, and if he did get away it was to a cabin for a couple of days. He eschewed materialism. He had no interest in that at all.”

Despite his hectic schedule, he was a tremendous masmid. This came as a surprise to many who knew him because he never boasted about his accomplishments. Says Goldberger, “I worked with him on a regular basis, but I didn’t know what an incredible talmid chochom he was. He was a boki in many areas, but I had no idea because he was so unassuming. When I heard about it at the levayah, I was surprised at his depth that I really was unaware of over all the years we worked together.”

His commitment to his chavrusos was unwavering. According to his secretary, Amy Kurtz, “He did not step foot into yeshiva before learning with Rabbi Bain and Rabbi Kobre.” His first chavrusashaft with Rabbi Eytan Kobre began at 5:45 a.m. at Agudas Yisroel of Bayswater. “He was very committed to it,” says Kobre. “We learned Gemara, Rashi, and Tosfos. The quality that stands out was his dependability. He was like a rock. You knew you could count on him.”

R’ Moshe Bain was his chavrusa for twenty-six years. R’ Moshe considers Rabbi Harbater’s commitment to their chavrusashaft a special chesed. “A couple of years ago,” he says, “I became ill and it was difficult for me to leave the house. So he started coming to my home every single day at seven thirty in the morning to learn with me. There’s no question that he was a big talmid chochom. But more than that, it was a tremendous chesed for him to come each and every morning without fail to someone’s home just because he can’t get out. I’m also having difficulty with my vision so he would come and do the reading.”

Rabbi Harbater’s schedule was demanding, yet he was the consummate family man. “He basically gave the shirt off his back for his wife and kids,” says Miller. “He would do anything for them. They were his priority and he took care of them.”

He was a wonderful husband to his wife Shira, says Chevi, a family friend. “They were a really nice couple who always helped each other. They were middle aged, but they acted like newlyweds. They took the ferry together to Manhattan or visited museums together. Instead of hiring a cleaning lady, she would tell me, ‘I did the sinks and he did the counters.’ He was her rock.”

Whenever his wife or children called him, he would answer the phone. He was dedicated to their success. “He was a big believer of chanoch lena’ar al pi darko,” says Miller. “If any of his kids needed a different yeshiva, he didn’t blink for a second. Whatever worked for them was paramount.”

His son once missed a flight to yeshiva, presumably because he stopped for a sandwich. “Most fathers would get annoyed,” says Chevi. “But he just… booked another ticket at considerable expense. He didn’t complain. Instead he said, with his trademark humor, ‘Benny, enjoy your sandwich.’”

Many were impressed with his breadth of knowledge and sophisticated humor. “He was a well-rounded person,” says one parent. “He was intelligent and witty and yet also the sweetest, most self-effacing person.”

“He did not care for attention,” says Mrs. Kurtz. “He did his work, but he didn’t need a pat on the back. Often, he would wryly introduce himself as, ‘I am Yehuda Harbater and I work for Mrs. Kurtz.’ He was down to earth and simple and only wanted the best for the yeshiva.” One of his favorite lines was, “I’m a nobody.”

Rabbi Harbater’s levayah lasted two hours, with speaker after speaker singing his praises. It’s been a week since his passing, says Mrs. Kurtz, and still dozens of parents are calling and emailing the administration, sending messages of condolences, telling their personal tales of his kindness and consideration. The man who called himself a “nobody” was, in fact, a very special somebody. As rosh yeshiva of Yeshivas Darchei Torah, Rabbi Yaakov Bender worked side by side with Rabbi Harbater for decades. “His passing is a tremendous loss for the yeshiva. I don’t see how we could replace him. He was indispensable,” says Rabbi Bender.

Rabbi Yehuda Eliezer Harbater was the son of Moshe Yisroel Harbater, who came to this country in the 1930s. “He was very proud of his father,” Rabbi Bender remembers. “His father survived the Chevron massacre. His fingers were chopped off and he was bleeding, but he managed to survive.”

It was evident that young Yehuda was brilliant. He attended Ohr Yisroel elementary school and Mesivta of Long Beach. “Everyone thought he would go to Harvard one day,” says Rabbi Bender. “But all he wanted to do was sit and learn. So he went to yeshiva in Denver and then to Mir Yerushalayim, where he became close to Rav Chaim Shmuelevitz and Rav Beinish Finkel.”

Rabbi Harbater lived in Far Rockaway most of his life and joined the staff of the yeshiva as executive director. As the yeshiva grew from 200 students to over 2,000, he assumed the most difficult job, dealing with tuition payments. “Many parents of school children hate the ones in charge of tuition,” says Rabbi Bender, “but… everybody loved him. He was a class act when dealing with parents and a big mentsch to everybody.”

When parents were going through hard times, he understood. “He once met a parent on the street who told him he had lost his job. Yudi was shocked. ‘Why didn’t you tell me?’ he said to him. ‘You must stop paying tuition immediately!’”

According to Rabbi Bender, Rabbi Harbater was completely selfless. “He had not an ounce of ga’avah and needed nothing in life. He didn’t need fancy cars or fancy vacations. In the summer he would take a cabin in the woods near a minyan and play guitar with his kids. He would grill some food, read a book, and go fishing. And he would learn. He didn’t need anything else. All he wanted was to make his wife and children happy.”

Rabbi Bender remembers his outstanding sense of humor. When he visited Eretz Yisroel a few years ago, Rabbi Harbater purchased cemetery plots for himself and his wife in Beit Shemesh. “I just got a gorgeous basement apartment,” he would joke. “And what a view!”

He was light and unassuming about himself but when it came to other people, he was very careful. “He was impeccably honest,” says Rabbi Bender, “and makpid on his ehrlechkeit. He also never spoke a word of lashon hora. With a job like that, how was he able to do that?”

Rabbi Harbater was a talmid chochom, says Rabbi Bender. “He didn’t stop learning be’iyun. He worked very hard at it… At one point he gave a shiur to the mesivta on sefer Shav Shmaytza and learned Ketzos. He finished masechtas and chazered clearly. I personally learned bechavrusa with him for two years. He was brilliant.”

The mood at yeshiva is subdued as the staff and administration consider how they will move onwards. “People are finding this hard to believe,” says Rabbi Bender. “He was such a fixture here, sometimes staying in the office until very late at night. It’s a tremendous loss for all of us. He is simply irreplaceable.”