Quick as a Turtle 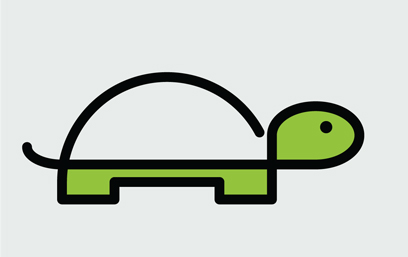 Not long ago, I was in someone’s home, where I was going to do something on their computer. As the homeowner switched the computer on, we stood talking about nothing in particular. After about half a minute, though, when nothing seemed to be happening on the computer screen, he apologetically explained that the computer was a bit slow.

Once the system finally loaded, the wait was still not over. After clicking on the icon to start a particular program, we found ourselves staring at that annoying circle going round and round. I don’t think it was more than another half a minute – a minute perhaps – but the feeling was clearly there that this thing was sloooooow. I heard about how they were hoping to get a new computer, and I completely understood the feeling.

That was when the thought struck. This sloooooow computer, not long ago, when it was new, was surely impressive with its “blazing speeds.” There is no question that a year ago, there were many companies that easily spent tens of thousands of dollars upgrading their computers. Surely, those upgraded systems were considered – at the time, only one year back – to be cutting-edge systems whose speeds and capabilities pushed the outer limits. The fact that it made the older systems seem virtually obsolete made the expenditure of the tens of thousands definitely worth it.

Yet, with the rate of today’s technological advances, we have today, just one year later, systems that make last year’s cutting-edge innovations seem like relics of the middle-ages. “You thought that was quick and instantaneous? Get a load of what this thing can do!”

So where not too long ago we’d have marveled at a computer that booted up and loaded a program in less than five minutes flat, today we find ourselves on “shpilkes,” unable to believe that this old computer takes sooooo long.

We Jews wash our hands many times every day. We do so upon arising, after using the restroom, before partaking of bread, before praying, after cutting our hair or nails, and at other times as well. The seforim discuss multiple purposes for the various times we wash, be it for reasons of spiritual purity, physical cleanliness, etc. Given the nature of each individual situation and its particular reasons for hand-washing, the method for washing varies, from the type of water one can use, to the utensil needed (or not needed), to the number of times and the order that each hand is washed.

While it is far too complex and lengthy to discuss any of the many details here, one thing is clear with virtually any type of hand-washing: Filling up the washing cup all the way and spilling a generous amount of water over our hands solves many potential halachic or technical problems. In case after case, using a full cup and pouring the water out liberally solves or avoids any number of hand-washing uncertainties.

To quote the words of the Mishnah Berurah (158:37), where it pertains to washing for bread, although the minimum amount necessary is a revi’is of water for both hands, “one should not use less than a revi’is for each hand, because with less than that, one needs to be careful with numerous other factors in which not everyone is knowledgeable.”

(Though this is way beyond the scope of this article, this author has been told that some people who find themselves irrationally worried about hand-washing can at times be reassured to know that by simply pouring a revi’is of water over each hand, they avoid almost any and all potential problems.)

This is aside from the phenomenal blessing assured us by Chazal, quoted in the Shulchan Aruch (ibid.), where Rav Chisda taught (Shabbos 62b) that by washing with an abundance of water, he was assured an abundance of blessing.

Curiously, however, so many of us wash so quickly and so minimally, and for no good reason whatsoever. If we would stand at a public sink before mealtime, we would be excused for thinking that there must be a bus outside leaving in five minutes and anybody who catches the bus will get a million dollars. Or at least a free sushi platter. So much in a hurry are we to just get some water into the cup, splash a bit over our hands, and move on.

Where are we going? How much longer would it take to wait for the entire cup to fill? A few more seconds?! Are we that pressed for time? To pour the water generously and cover our entire hand would take a few more seconds. Why the rush, almost as if some unseen force is holding a fire under our feet and we must get out of there fast?

Boruch Hashem, there are a respectable number of conscientious individuals who we indeed see washing carefully and unhurriedly, and we are not talking about anyone practicing chumros or stringencies here. We are simply discussing filling the entire cup and washing one’s entire hands. Is that so big a deal? It is not. Aside from those admirable few, though, the rest of us don’t seem to have even that one second to spare at the sink.

Perhaps it’s because we’ve become so conditioned by our technological advances to look upon even a second or two as “ages.” Yesterday’s blazing speeds are today’s snail mail. What used to be quick is now slow as a turtle.

We don’t have time. We gotta move. We must get going.

Where are we going? Nowhere. We just gotta go.

Our rush is often so irrational that the only way to explain it is that since it is such an easy thing whose reward is so great, the yeitzer hara goes all out to prevent us from fulfilling this easy and basic mitzvah. He rushes us along, making sure that we don’t even stop to think whether we are even in a rush or why.

Going the Extra Mile – or Foot

If we think about it, the same yeitzer hara manifests itself during many other situations as well. We’re giving someone a ride and he tells us where he’s heading. We’re passing right at his corner, so we pull over, drop him off, and feel so good to have been able to bring him so close to his destination.

Could we not have simply driven the half-block and brought him door to door? Quite often, we could have. We’re simply too used to rushing and did not stop to think whether there was any reason to do so.

Now, surely, we do not have to provide anybody with door to door chesed. At times we also are indeed pressed for time, and have already gone out of our way as it is. Sometimes half a block, with heavy traffic, can be more than we bargained for.

All this is true, but how many times could we have gone the extra block or two and did not simply because we weren’t heading there? Would it have made any difference to us – in the comfort of our car – to drive the extra half a minute? It would not. We simply never took the time to think about the difference between a phenomenal act of chesed (giving someone a ride), and a phenomenal act of chesed done with shleimus, with completion (going that extra half a minute or half a block).

Again, if it’s too much, then it’s too much, and every person can judge his own situation in each circumstance. Those on the receiving end must give others the benefit of the doubt as well, and be appreciative of any chessed we did receive, which is not owed to us in any way. Still, there are so many times we can go the extra bit, occasions when we have the time to exchange a greeting while dropping something off, to pick someone up rather than have him come to you, to find out which brand, type or flavor someone prefers once we’re picking something up for them anyway.

The yeitzer hara rushes us along. Our electronic devices make milliseconds feel like wasted eons. The reins are ultimately in our hands, though. We can just stop, go the extra minute or minutes, and let that circle go round and round for just another little bit.

Take a chill. Nothing is going to happen.