PTA: Who Is Scared, The Kid Or The Teacher? 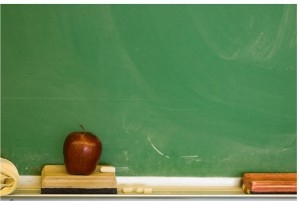 I will never forget the notebook that my parents brought home with them from PTA. Just thinking about it gives me goosebumps. Let me first make an admission. I was a terrible student throughout my elementary and middle school years. Until I went to yeshiva, I simply wasn't interested in learning or studying. I was an equal opportunity offender who neglected both my limudei kodesh and, lehavdil,limudei chol. It wasn't out of maliciousness. I didn't deliberately (at least most of the time) make the lives of my rabbeim and teachers miserable. I was just not interested in focusing on learning. At recess, depending on the season, we would play baseball, hockey and football, and I was busy thinking about teams, homeruns, touchdowns and hat-tricks.

Frankly, my focus just wasn’t on anything academic, unless it was tallying scores. Whatever learning that happened to fall into my head during class was what I picked up. I thus managed to squeeze by, with marks on the border between passing and failing. Through 8th grade, I do not recall ever even studying for a test. I shudder to contemplate what would have happened to me if I would have grown up today. I would have been relegated to a yeshiva for boys with learning difficulties and would never have been able to get ahead in life, all because I was the playful type, the type who just wanted to be a kid for a little longer. That, however, is an entirely different issue for a different time.

Either way, life was great and carefree – until PTA. My parents, may they be well, are from the old school. They took our education extremely seriously and had trouble understanding why I and some of my siblings didn’t share their viewpoint on the matter. PTA was a very important evening on their calendar, and not only would they talk at length with each teacher, but they even took notes. That notebook was my undoing.

The day after PTA was one that I wished would never come. My father, horrified upon reading his notes and seeing what I had done or not done in class, would confront me. You see, in those days, the teacher actually told the parents the truth, and, wonder of wonders, parents from the old school like mine wanted to know the truth and weren’t afraid to “deal” with their kids. My father’s way of “dealing” with us was a combination of talking to us and doling out good, old-fashioned corporal punishment. I don’t know if it achieved short-term results, but it certainly taught us that there is a din and a dayan, that certain behaviors have consequences. I hated the day after PTA, but I can’t say that I resented the punishment. I knew I deserved it and my parents were totally consistent in conveying what they wanted from me, so I expected the consequences, gritted my teeth, took it on the chin…and went back out to play hockey.

I thought of that infamous notebook a couple of months ago when I was interviewing Rav Moshe Tuvia Lieff, rov of Agudas Yisroel Bais Binyomin in Flatbush. He was talking about chinuch and said, “When I was a child, we kids would say Tehillim before PTA. Today, the rebbi says Tehillim before PTA!”

Often, in today’s world, a teacher feels that he can’t tell the parents the whole truth. They just are not resilient enough to take it. Even worse, they will frequently turn around and blame the teacher for not trying hard enough, while absolving their “tzaddik” from responsibility for his actions.

ARE WE UNDER-VALUING OUR MECHANCHIM?

I thought about the challenges of being a mechanech or mechaneches today while scores of mechanchim and mechanchos from across the country will gather this Shabbos in Pennsylvania at the Torah Umesorah Convention. They represent tens of thousands of children across the entire country and, truth be told, sometimes I wonder if we are guilty of under-valuing these wonderful shluchim of ours.

Unfortunately, I sometimes think that there is a subliminal message being conveyed that, somehow, being a rebbi is less of a profession than other professions. The fact that rabbeim’s salaries are, by and large, towards the bottom of the economic ladder certainly does not help matters. In truth, however, today’s rabbeim and mechanchos are virtually all consummate, highly motivated professionals. Anyone who has had the privilege of attending a Torah Umesorah Convention cannot help but be amazed. Just watching the way rabbeim and teachers talk, debate, and seek to learn more and improve their ability to reach Yiddishe kinderlach is a sight. The workshops percolate with interest and passion in the profession, and with an understanding that they are engaged in the highest form of avodas hakodesh. After witnessing this, one inevitably exclaims, “Ashreinu that we have such wonderful, devoted mechanchim and mechanchos who really care, who are professional, motivated, devoted and love their profession and the children whom they are teaching.”

Things weren’t always that way. I remember speaking to one of my mentors and role models, Reb Pinchos Feinstat zt”l. Reb Pinchos was a truly special Yid, a talmid chochom who knew Shas b’iyun, a true chossid who served Hashem with depth. He experienced the unspeakable horrors of the Holocaust, and those horrors were etched on his face. One of the last conversations that I had with him was about chinuch. One of his grandchildren, a star rebbi, had just visited and left the house. Reb Pinchos turned to me and said, “Achsher dorah (This generation has improved).”

“You see my grandson? Do you realize that we never had anything even close to a rebbi of this caliber when we were kids? Just look at the sheets that today’s kids bring home! Do you know what my cheder looked like?”

Reb Pinchos continued: “Our melamed was an old man who had lost his job and couldn’t find another parnossah,so he was relegated to being a melamed. He was tired and unmotivated, and he had little patience for us due to the hard knocks that life had dealt him. The most vivid memory of him that I have is that he would chain smoke while teaching us. His mustache was yellow from tobacco. I can’t forget the way he would constantly be involved in rolling the tobacco into paper to make cigarettes. He couldn’t afford good tobacco, so the cheap stuff that he smoked smelled terrible. The smoke filled the tiny room that we learned in and things always looked sort of hazy. I can’t even believe we were able to learn anything, but somehow we did.”

Today, who wants to be a rebbi? The best and the brightest! I was recently speaking to Rabbi Eliezer Goldstein, who runs the Torah Umesorah Bais Medrash Govoah-affiliated Aish Dos rabbeim training program in Lakewood. He said, “I am amazed by the quality of the yungeleit who have decided to dedicate their lives to chinuch. We are talking about the best and the brightest, successful people who, with their brains, charisma and drive, could succeed in many other professions and areas of life. Nevertheless, they have decided to dedicate their lives to teaching Hashem’s Torah to Jewish children.

We sometimes tend to romanticize what life was like in pre-war Poland. Certainly, the gedolei Torah were towering giants far greater than what we produce in today’s generations. However, there were plenty of negative things occurring back then as well. One of those was the quality of melamdim. Reb Pinchos would tell me that unless one was very wealthy and could afford to pay a top melamed, the quality of chinuch was terrible. Today’s mechanchim and mechanchos are amazing in comparison. We should understand that, notice that, thank Hashem, and thank each rebbi and each morah, because they are our shluchim and are inspiring our children to reach new heights.

CHINUCH MUST ALWAYS BE A PARTNERSHIP

For parents, one word of caution is in order. Because we have such amazing mechanchim and mechanchos, there is a tendency among some parents to totally outsource their chinuch obligation for their children to the schools. Certainly, the schools act as their shluchim, but the bottom line is that the chinuch of children is ultimately the responsibility of the parents. No father or mother has a right to abdicate parental responsibilities to the school. After all is said and done, Hashem gave the father and the mother the child as a pikadon, and they must be involved – really involved – in the chinuch of their children. Chinuch begins and ends at home. Chinuch starts long before a child enters school and never ends.

If parents work in partnership with the school, if they are in constant contact with the rebbi, the morah, the mechaneches, the English teachers and the principals, they have a chance to succeed. If a parent becomes an adversary of those who are being mechanech his children, if he undermines them, he is almost ensuring that his child will end up becoming a pereh odom.

Most of all, in today’s difficult times, we parents and those in chinuch must daven for our children and talmidim. The Tchebiner Rov, Rav Dov Berish Weidenfeld, zt”l, once told a father, “If you don’t daven three times a day for good children, you can’t have any teinas [if children don’t turn out the way you want].”

If we daven, work with the school, and augment the authority of our rabbeim and teachers, we have a chance of raising G-d-fearing, respectful children who know what is expected of them.

Let’s go back to the days when it was the kids who were terrified of PTA, not the teachers!