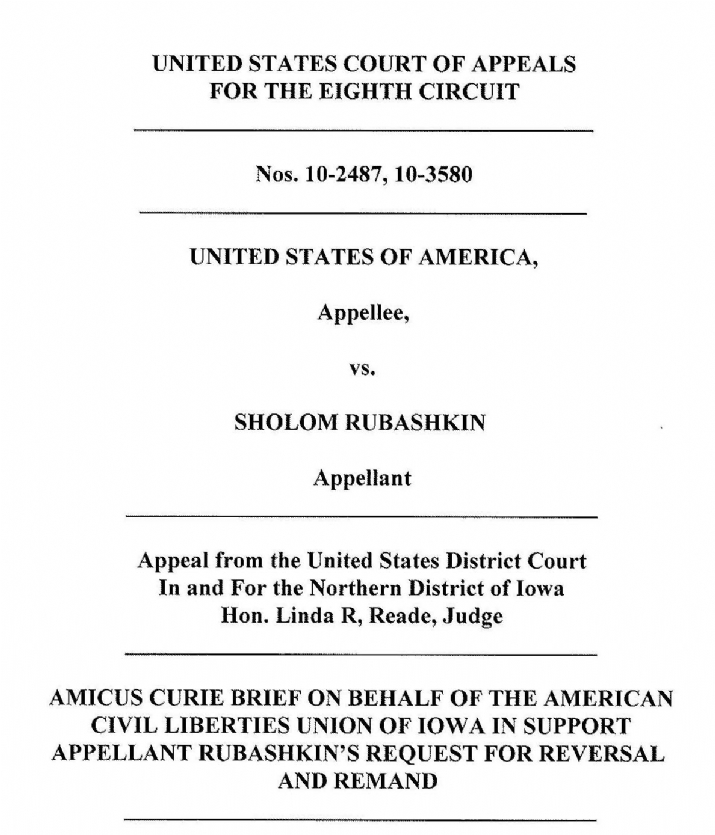 Three amicus curiae (friend-of-the-court) briefs by prominent national organizations were filed Monday with the Eighth Circuit Court of Appeals, calling for a new trial for Sholom Mordechai Rubashkin, or for re-sentencing by an impartial judge, and greatly raising the case's profile in the legal community. The briefs by Washington Legal Foundation (WLF), The American Civil Liberties Union (ACLU) and the National Association of Criminal Defense Lawyers (NACDL) reinforced the powerful appeal by Sholom Mordechai's appellate team, led by Nathan Lewin of Washington, D.C. The appeal unveiled judicial and prosecutorial misconduct of such seriousness that a number of prominent legal organizations, after reading the arguments, were galvanized into action. They wrote to the appellate team, expressing their interest in supporting the appeal with presentations of their own.

The amicus curiae briefs sparked immediate opposition from federal prosecutors, who scrambled to suppress them, objecting that they present nothing new. Government objection to an amicus curiae from a respected legal organization is exceptionally rare, legal experts say. That the Iowa prosecutors tried to bar the briefs betrays an obvious fear of their impact.

“This is a desperate effort to keep the lid on a story that is about to blow someone out of the water,” one source close to the defense said.

The 8th Circuit Court of Appeals has given the government 8 days to present its objections in a written motion. If no motion is introduced, the briefs will automatically be accepted.

The ACLU brief was outspoken in its condemnation of Judge Reade’s ex parte (secret) communications with the government in the planning of the raid, and her discussion of “charging strategies” to be used in the criminal prosecutions.

Neutrality in a judge is the sine qua non of a fair trial. Judge Reade’s collusion with the prosecution team wholly disqualified her from presiding over Sholom Mordechai’s trial, the brief said, and requires the conviction to be overturned.

The document stresses the vital importance of the “Separation of Powers Doctrine” in safeguarding a citizen’s civil rights. When the judicial function so drastically invades the executive function, as happened in the Rubashkin case, the brief said, the freedoms of all Americans are imperiled.

The ACLU called the judge’s breach of the judicial code “egregious,” citing the claims of a lawyer who “refused to participate in the criminal proceedings after learning the plea agreements had been pre-approved by Judge Reade before ever being presented to defendants.”

This lawyer was so disturbed by the contrived proceedings following the ICE raid that he walked out of the courtroom. He later wrote a letter to the chairman of a 2008 congressional inquiry into the raid, describing what he felt was a mockery of justice.

Who was this lawyer who put his career on the line by standing up to powerful authority figures the fateful day of the raid? The ACLU brief does not identify him. But documents connected with the congressional hearing into the ICE raid reveal that a letter of protest was sent to the chairman of the hearing by an attorney named Rockne Cole of Iowa City.

In the letter, Cole described a “secret” meeting of defense counsel assembled by the court to arrange for the representation of defendants arrested in the Agriprocessors raid.

The meeting was attended by staff members from the U.S. attorney’s office who explained the procedures that had been pre-arranged for the processing of the arrested immigrants, Cole wrote in his letter to the congressional committee.

“What I found most astonishing,” wrote Cole, “is that apparently Chief Judge Reade had already ratified these deals prior to a single lawyer even talking to his or her client. This directly violates the Rule 11 plea procedure, which provides that ‘the court must not participate in these plea discussions.”

The plea deals the defendants were coerced into signing were “binding,” meaning they came with a mandatory five months imprisonment, followed by deportation.

This fact strongly implicates Judge Reade for working in tandem with prosecutors in mapping out the criminal proceedings.

The power to hand down sentences lies at the heart of a federal judge’s immense clout.

Judge Reade is infamous for using her sentencing discretion to impose uniquely harsh sentences, often going beyond the prosecutors’ recommendations.

In the mass proceedings in the Postville prosecutions, hundreds of binding plea deals calling for jail sentences and deportation were pre-scripted and signed by the defendants in a matter of a few days. They were then presented to Judge Reade, who without discussion or debate, instantly rubberstamped them.

“An objective view of these violations leads one to suspect that all of the defendants, including Mr. Rubashkin, who faced prosecution as a result of this joint activity [between the prosecutors and judge]’ faced an ‘unfair tribunal,’” the ACLU brief said.

“Mr. Rubashkin’s conviction should be vacated and he should get his ‘day in court,’

with a tribunal that is not an arm of the prosecution. Due Process demands it. The Separation of Powers Doctrine demands it.”

A second friend of the court brief, filed by the Washington Legal Foundation and authored by acclaimed legal sentencing expert Douglas Berman, expressed its deep concerns over “substantial flaws in the [judge’s] sentencing of Sholom Rubashkin to a functional life sentence.”

The authors accused Judge Reade of unreasonableness in blindly refusing to weigh any of the arguments the defense presented, to challenge the $26 million loss amount used to impose a draconian jail sentence.

She also refused to consider any of the many mitigating factors in Sholom Mordechai’s case that are routinely given consideration at sentencing.

“This man is a first offender and father of 10 children, who has led a pious life and whose conduct was part of efforts to keep afloat a business of great importance to his local and religious communities,” the brief noted.

“Indeed, many former senior Justice Department officials – including six former Attorneys General of the United States – wrote directly to the district court to express their view that a long prison should not be imposed on Mr. Rubashkin.”

The brief sharply criticized the uniform “unreasonableness” that runs through Judge Reade’s sentencing order, and took Reade to task for her mere “lip service” to the true goals of the Sentencing Guidelines. It urged the court of appeals to reverse Sholom Mordechai’s sentence and remand the case to a new judge for re-sentencing.

The third amicus curiae brief, filed on Tuesday by NACDL, the National Association of Criminal Defense Lawyers, has not yet been released to the public.

The days of the Wild West, with cowboys and Indians, outlaws, wagon trains and gold fever that marked the 1800’s, are no more. But vestiges of it, such as powerful, self-styled “lawmen” who dispensed their personal brand of justice to whomever–and in whatever amounts–they saw fit, apparently still prevail in some corners of this country.

The Rubashkin saga is an example of this kind of lawlessness, in which a judge allegedly colluded with prosecutors in the planning and execution of a criminal prosecution against a defendant they were determined to incarcerate for life.

Disguising their vindictiveness behind the mantle of justice, the judge and prosecutors manipulated laws, fabricated charges and ignored evidence in order to orchestrate a guilty verdict.

They counted on the negative publicity surrounding Sholom Mordechai to shield their actions from scrutiny. And thumbed their noses at striking evidence of the travesty of justice they engineered.

In view of recent developments, public opinion about the case has been subtly shifting. The appeal is a compelling tour de force that dismantles piece by piece an intricate and insidious odyssey of injustice.

It shines a light on the prosecutors’ vindictive pre-trial conduct in a way that makes that conduct crucial to understanding the case, while also highlighting Reade’s utter failure to carry out the function of a federal judge as an impartial arbiter.

With cries of foul play and demands for a fair trial emanating from some of the country’s most prestigious legal organizations, the tide may well be turning for Sholom Mordechai. And justice might soon be catching up to what many are beginning to view as a cadre of outlaws in sheriff’s garb.