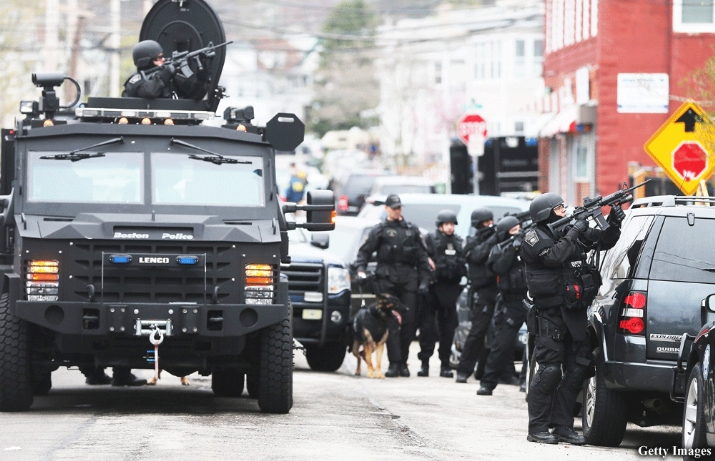 As I write, we do not yet know definitively whether Boston Marathon bombers Tamerlan and Dzhokhar Tsarnaev acted alone or with the assistance of others. The Daily Mirror of London reports that 1,000 FBI agents are currently looking for a 12-member cell of which the brothers were part, and other media outlets have reported the arrest of two apartment mates of Dzhokhar. Given the accuracy of media reports last week prior to the identification of the two brothers as the lead suspects, it is hard to put too much credence in either report.
But of one thing we have received further confirmation, if any were needed: Islam possesses a power unique among all the world’s religions today to fill its adherents with the desire to murder innocents among the non-believers. Even vulgarian Bill Mahler gets it. As he told one of those cartoonish professor types brought on to his show to warn against drawing any negative inferences about Islam from the Boston Marathon bombing, “I mean, there’s only one faith, for example, that kills you or wants to kill you if you draw a bad cartoon of the prophet. There’s only one faith that kills you or wants to kill you if you renounce the faith. An ex-Muslim is a very dangerous thing. Talk to Salman Rushdie after the show about Christian versus Islam. So you know, I’m just saying, let’s keep it real.”
It is no use pretending that jihadis of various stripes do not draw on a rich lode of canonical texts – the Koran and sayings of Islam’s prophet (the hadith) to support their actions. Contrary to the conclusion of the 80-page government report on the Ft. Hood Massacre that “religious fundamentalism alone is not a risk factor” for mass slayings (and which managed to omit all mention of Dr. Nidal Hasan’s Islamic beliefs), when a former Golden Gloves boxing champion (Tamerlan), or your average teenage “pothead” (Dzhohkar), or regular “good lads” (i.e., the 7/7 London underground bombers) suddenly start espousing radical Islamic beliefs or following strict Islamic practice, watch out.

The father of Uman Farouk Abdulmutallab, the so-called “underwear bomber,” who tried to bring down a commercial airliner over Detroit, was sufficiently worried by his son’s turn towards radical Islam to contact British intelligence, who relayed the warning to the CIA, which ignored it. Former Attorney-General Michael Mukasey pointed out Monday in the Wall Street Journal that Tamerlan was one of five Muslims interviewed by the FBI since 9/11 who subsequently engaged in terror acts. The other four were: Dr. Hasan, who mowed down 13 at Ft. Hood; his Yemem-based mentor Anwar al-Awalki (subsequently eliminated by an American drone); Abdulhakim Juhahid Muhammad (born Carlos Leon Bledsoe), who killed a recruit at an army recruiting center in Little Rock; and David Coleman Headley, who relayed intelligence to the perpetrators of the Mumbai massacre. The reason, in each case, we can assume, had to do with their flirtation with radical Islamic groups.

Hasan, Bledsoe, Faisal Shahzad, the failed Times Square bomber, and would-be subway bomber Najibullah Zazi, and perhaps the Tsarnaevs, acted essentially alone or in small groups, not as part of a well-planned operation, such as 9/11. But while they may have acted without operational support, that does not mean that they were not influenced by international jihadis. Some of them were in contact with radical Islamists via the Internet – the latter troll the internet for recruits – and in several cases they had terrorist training abroad. On the one hand, the difficulty Al-Qaeda and its knock-offs are having mounting large-scale, mass operations is cause for celebration. On the other hand, such “lone wolves” will be far harder for law enforcement to pick up on their radar.

IT IS A SCARY THOUGHT that out of 1.3 million Muslims worldwide, there may be tens of millions susceptible to the lure of radical Islam – hundreds of thousands in the United States alone. And it is a natural human tendency to avoid facing a frightening reality.

After the carnage of World War I, British Prime Minister Neville Chamberlain could not bring himself to contemplate the possibility that Hitler, ym”sh, was preparing for war.

Chamberlain never read Mein Kampf, certainly not the sections in which Hitler talks about the role of deception in executing his plans for world domination. The British press went along happily, failing to report on Germany’s military build-up or other unsavory subjects. In a similar vein today, government officials, from the president on down, keep their heads firmly in the sand concerning the danger of the Muslim Brotherhood and allied ideologies both internationally and domestically. They have either not read or refuse to believe the readily available Muslim Brotherhood literature laying out its plans for worldwide spread of sharia (Islamic law).

The mainstream media goes along with the myth that Islam is not the problem. All last week, the speculation of so-called MSM experts centered almost exclusively on theories of another right-wing nut job, like Timothy McVeigh, and one Slate columnist went so far as to openly express his hope that the perpetrator was a “white male.” Even after the perpetrators were known, the press professed to be flummoxed as to what their motive could have been. The Boston Globe headline would have been funny were it not so illustrative of a dangerous cast of thought: “Islam might have had a secondary role in Boston attacks.” Various commentators had fun creating their own riffs on that headline – e.g., “Gravity may have played secondary role in fall;” “Anti-Semitisim may have played secondary role in Hitler’s Final Solution.”

For a classical example of how unwilling our political leaders have been to face the inroads of radical Islam into the American Muslim community, one need go no further than the Islamic Society of Boston mosque in Cambridge at which the Tsarnaevs prayed. That particular mosque and its imam have multiple Muslim Brotherhood ties.

The mosque is also connected to the Islamic Society of Boston Cultural Center in Roxbury, the largest mosque in New England and the beneficiary of much governmental goodwill. The mosque received a plot valued at nearly $2,000,000 from the city of Boston at a greatly reduced price.

The mosque’s founder Abdurahman Alamoudi was sentenced to a 23-year prison sentence for terrorism-related offenses, and its ultimate spiritual authority, Egypt’s Yusef Al Qarawadi, calls for the murder of Jews. A current trustee, Ousasma Ziade, has been indicted for his connections to Al-Qaeda’s top fundraiser. The son of one of the mosque vice-presidents and another mosque member have been indicted for hatching a plot to kill shoppers in a local mall. A female member, Asfia Siddiqu, was convicted of trying to kill an FBI agent in Afghanistan while shouting “Death to America.” (She is an MIT graduate.)

After Siddiqu’s conviction, imam Abdullah Farooqa was filmed telling mosque members that they should not be afraid to do whatever is necessary in response to her conviction – e.g., “grab onto a shovel, grab onto a gun.” Despite the mosque’s multiple ties with radical Islam, Massachusetts Governor Deval Patrick visited it just two months after the imam’s incendiary speech. The imam presented Patrick with seven demands, including one that law enforcement officers be given sensitivity treatment about dealing with the Muslim community. He handed Mass. Attorney-General Martha Coakley $50,000 towards the sensitivity education program. Needless to say, Patrick acceded to all of the demands.

The Islamophobia card is one that Muslim Brotherhood-affiliated mosques and groups play expertly. The Council on American-Islamic Relations (CAIR), listed as an unindicted co-conspirator in the Holy Land Foundation terrorist funding prosecution, for instance, has led a long campaign to have New York City Police Commissioner Raymond Kelly dismissed. Their prime grievance: a 2007 report produced by the NYPD’s 1,000 person counter-terrorism department titled “Radicalization in the West: the Homegrown Threat,” on which a new chapter could be added about the Tsarnaev brothers.

Their most recent club against Superintendant Kelly was his participation in The Third Jihad, the third of a trilogy of films produced by Raphael Shore and Wayne Kopping of the Clarion Fund on radical Islam worldwide. The narrator of the film is Dr. Zuhdi Jasser, a former Navy Lt.-Commander, who begins the film by holding up a fifteen-page Muslim Brotherhood document, uncovered by the FBI in the course of the Holy Land Foundation prosecution, outlining a plan to use front groups, mosques and Islamic centers to destroy Western civilization from within.

To date, Kelly has been an outlier in his outspoken willingness to confront the Islamic threat and to introduce surveillance of radical Islamic groups, including mosques. After the Boston Marathon bombing, however, any major police department that does not have an ear in the mosques and Islamic centers to know what is being said and by whom would have to be considered in dereliction of duty. Former CIA Director James Woolsey and the first head of the Department of Homeland Security Governor Tom Ridge (who also appear in The Third Jihad) credit the NYPD’s surveillance program with having thwarted several terrorist threats arising within the New York Muslim community.